Would you please post a screenshot showing your routine? It’s hard to help without knowing exactly what your routine is configured to do. I have a couple of routines that turn on lights with motion, similar to yours.

I will work on posting a screenshot. In the meantime, have you had any luck with routines to turn off the lights?

Mine work correctly without issues.

Here are a few screenshots. Notice in one of them, the bottom shows motion in progress, while the main portion says clear. In another, the motion sensor just detected motion and the time is off by 2 minutes from my phone’s time. Apparently, I can only add one picture at a time. See following posts.

This is what works for me (forgoing to move the off command below the wait): 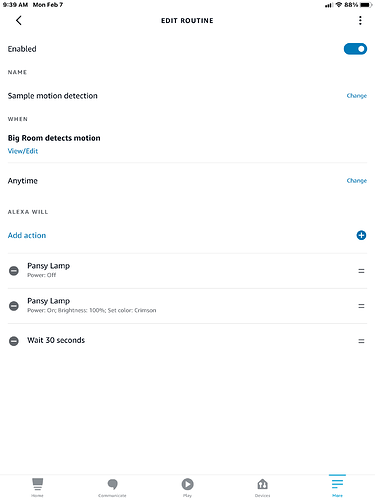 turn them off 5 minutes after the motion clears.

Missed this part. Let me test.

I suppose I should ask if you have had any luck turning off lights when the motion sensor clears after a set amount of time, not when motion is detected.

Heh, you just noticed. Thank you!

Just tested and this worked: (Just a thought, try it with just one light. ) 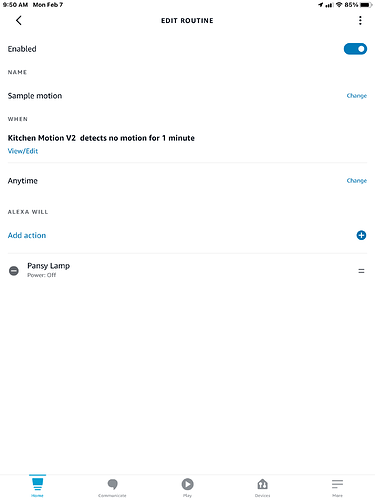 You might want to read this–seems to be a similar issue:

V2 Motion Sensors not turning off lights in Alexa Sensors

I have been using the V2 motion sensors to turn lights on and off using an Alexa routine. As of about a month ago the sensors were not turning the lights off after not detecting motion. The only way I could get it to work is to set the time to zero. Is anyone else experiencing this issue?

I have 3 Wyze Sense motion sensors that I have been using to turn lights on/off . Until recently they have been working great but now they won’t turn lights off unless I set the ‘no motion’ time to zero minutes. Is anyone else experiencing this issue?

This is a confusing question so, bear with me while I set it up. Generally, in motion sensor programming (and I suppose, something in the hardware) you have the normal “motion detected” and “motion detector for” handlers. In these cases, let’s say we have a motion sensor and with using Alexa, you can set it to trigger something on motion detection and also, not until/unless motion has been detected for, so and so amount of time. Not all sensors can handle the “detected for” handler but every m…

Thanks for the posts! It seems that the issue was caused by an update. They are working now!

Glad to have been able to help. Just a note, you should remove your phone number from the last post.

Hm. Thank you for the posts, but none of them seem to offer a solution that I noticed. The first one suggests there’s a default off time, but I’m not sure where that is. I will look more later when I get back home.

BryanBuck, how did you get yours working? I seem to be having the same problem but can’t find a solution.

After the most recent update to the Alexa app it started working again:)
I didn’t make any changes.

Ah. Maybe I should check my Alexa app. I was focusing on the Wyze app.

Seems as though my app is up to date. I contacted Wyze Support. Hopefully they will come up with a solution.

I would like to add that my routine to shut off my lights when no motion has been detected for five minutes continues to fail unless set to no delay.

I started a thread last year regarding this and nothing has changed.

I will be contacting support again next time this happens.

Although my issue relates to the V1 sensors, I believe the main issue is how the wyze Alexa skill handles invoking delayed triggers.