Over the weekend I installed the Wyze Home Security System. I attached my existing Wyze Cam v3 to it. Today, while my system was disabled, I suddenly heard an extremely loud siren come from the camera. I immediately put in my PIN to the keypad to reset as disabled, but that didn’t help. I finally unplugged my camera that stopped it,

How can this be since my system was disabled? Or is it just a faulty camera that had nothing to do with the system?

If your sharing the camera

It has to be unrelated to the Home Monitoring System. Currently there is no way that I am aware of to link the Camera siren to the Home Security at all. You can add cameras into the Monitoring tab as a “Security Camera” but this does not affect how the camera functions, including the siren, in any way (this is why the keypad or disarming the system had no effect on the camera siren). It is more of a convenience feature so you can easily review concerning events captured on the most important cameras, especially when the system was armed.

Something else had to have set off the camera siren somehow, such as a rule/automation, or someone else with access to it accidentally tapping the siren or something. I would go to the account tab and select rules then review all the rules there that might have something related to a siren. Also check the History tab there and see if it tells you which rules were executed around the time this occurred.

Worst case scenario, reach out to Wyze support and they will walk you through some other possible things:

UPDATE: It just happened again. The siren came on for about thirty seconds and then stopped.

By the way, I called Wyse Tech Support who have no idea what is happening. They think it’s defective and I MAY be able to get a replacement for free.

That is really weird. I would think something like a rule has to be triggering it (or a person messing with you, especially if it turned itself off after 30 seconds…something doesn’t make sense…I thought it’s supposed to take like 10 minutes to time-out).

So weird, Interesting Wyze tech support had no other solution but to deem my camera “possibly defective.”

I set up two-factor authorization. That’s a great suggestion. Thanks.

I just got a notice from Wyze today that may POSSIBLY be related to your issue somehow. I don’t THINK it is, since it says nothing about testing the siren on any cams, and the testing is not supposed to happen until tomorrow anyway, but maybe there was some kind of inadvertent test while preparing for this? Again, I don’t think so, and it’s weird that it didn’t happen to lots of other people, including myself, if it were related in some way, but I guess it can’t hurt to share what I just read nonetheless:

Upcoming Test for the Security…

We believe that the best security system is the one that prevents bad things from happening instead of the one that only requests help when someone has already entered your home.
The Security Camera feature in Wyze Home Monitoring was meant to be an outer layer of protection to prevent intruders from entering your doors or windows. At the least, it would give you strong warnings before the situation escalated. That’s why we encourage you to add cameras facing outside your perimeter to your Security Camera list.

The Security Camera feature in Wyze Home Monitoring was meant to be an outer layer of protection to prevent intruders from entering your doors or windows. At the least, it would give you strong warnings before the situation escalated. That’s why we encourage you to add cameras facing outside your perimeter to your Security Camera list.
However, the Security Camera feature had some issues and didn’t work as expected. So we removed the product logic and only kept the Security Camera app interface over the past year.
After thorough investigation into our cloud software and firmware for multiple cameras, we have identified the root cause of the issue. We are gradually releasing the fix after development and internal testing. The last step of the fix is to test it in the environment our customers use instead of a private internal one.

You are able to set different notification parameters for your Security Cameras in the Wyze app by going to Home Monitoring Settings > Security Cameras > Threat Alert. Here’s our recommendation for setting up an effective Security Camera without it sending a frustrating number of alerts:

Imagine your system is in Home or Away mode. What are the events from your Security Cameras that you don’t want to alert you even if you are sleeping and your phone is in Do Not Disturb mode? Then, uncheck those event types from the Security Camera’s settings. 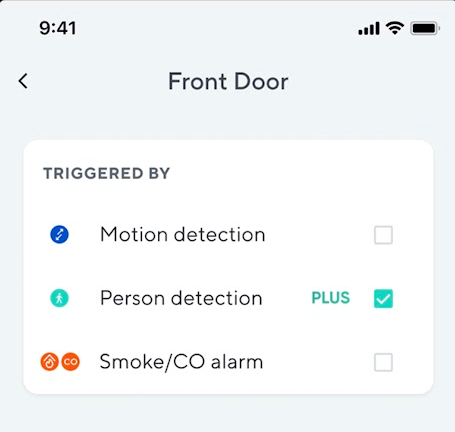 For example, you may have added three Security Cameras. One is facing the lane in your front yard that leads to your door, another is placed in the garage, and the last one is monitoring the back yard and its fence. Because there are squirrels and raccoons in your community, you don’t want to be woken up in the middle of the night because of the animals. In this case, you may want to uncheck “Motion Detection” for the front yard and back yard cameras. However, you probably want to be alerted if a person shows up in those two areas when your system is armed so you may select “Person Detection” for the two cameras. But for the camera in your garage, you may want to be alerted to any movement because it’s a closed space and you’re not expecting activity when the system is armed. Selecting “Motion Detection” would make sense for this camera though you may want to lower the motion detection sensitivity to reduce the odds of being alerted because of floating dust. When night vision is on, floating dust and cobwebs can trigger the motion detection.

But if you don’t want to be disturbed by any Threat Alerts, just select Off for Notifications under Threat Alerts.

During the test window of 1-2 PM Pacific on Wednesday, 03/02/22, we may enable and disable the feature logic multiple times. Once enabled, if your system is armed as Home or Away, the capabilities you selected for a Security Camera will trigger the action you chose in Home Monitoring Settings > Security Cameras > Threat Alert. The notifications could be Critical Alerts (default for iOS), push notifications (default for Android), or they could be turned off.

After the test, we will evaluate the results. If the fix meets our quality standards, we will officially release the fix for supported devices next Thursday, 03/10/22.

Please be assured that during the test, and after the fix has been released, triggering a Security Camera will NOT dispatch the police regardless of whether you’re using Test Mode or not.

Here are the Threat Alert triggers that will be tested and released:

Thank you for your patience while we work on this issue. Please stay tuned for the fix for remaining triggers.

I am just saying there is a VERY SLIM possibility that there was some kind of testing going on related to HMS security cams as you’d originally wondered. I don’t think it is likely, but I don’t have any better explanations for what you experienced either, so it’s worth reporting to you just in case.

The timmer on the V3,and V2 PTZ shows 29 seconds

The siren sounded again at 2:00 PM eastern time. Wyze is sending me a replacement:

That’s good. So weird it is just one camera, and not a rule. A replacement sounds like a great resolution.

I was frankly surprised how easy it was to get a replacement. Thought I’d have to fight for one.

I have personally always found Wyze support to be exceptionally reasonable. If you’re still under warranty, and you are cooperative with going through the tests they ask you to try first, it’s not a fight. They’ve often even gone above and beyond in many situations. I’ve been really impressed.

Sometimes even when something was 100% my fault, they still helped me out. Like when I got the video doorbell, it took me a while to set it up, I was past the 30 day return window and I had lost a few pieces (like the wires that connect up in the mechanical chime). I called support and told them it was 100% my fault, not theirs, that even if I was in the return window, I lost pieces so I wouldn’t qualify anyway. I told them I was willing to pay for my mistake and I asked if I could pay to get just another couple of wires that I lost, but I’d understand if they can’t do that, I just thought it couldn’t hurt to ask… and they just offered to send me a FULL replacement at no cost (I returned what pieces I still had of the original). I was just dumbfounded that even though I admitted it was 100% my fault, and that I knew I didn’t qualify for a return, etc, they still went above and beyond to take care of me.

The hard part is usually getting through their script of all the tests they want us to run first.

I don’t blame them for making us check everything first though. But once they verify it’s not a common solution, they either escalate it to someone higher up to look in more detail or just replace or fix it some other way when possible. They are pretty customer friendly in my experience.

Are critical alerts on iOS functioning as they should now?

If yes, do they work without the monitoring service?

I have never used iOS, so I’m not very familiar with iOS specifics like this. I recall Wyze mentioning something about iOS critical alerts, but I don’t know if that was enabled already or is a future update.