I’m still disappointed that no one else seems to exercise the old Xnor tags on the old firmware. Wyze ignores them but I thought for sure that TinyCam or one of the other projects would take advantage where available.

They may be avoiding the potential litigious implications that could result from a behemoth corporation that could squish them for it…after all, technically Apple ordered that nobody can use that code anymore, so creating new code to offer support for something could be seen as stepping on Apple’s toes. Even if ultimately Apple would be in the wrong, you’d have to waste tens of thousands if not hundreds of thousands of dollars and tons of time in court trying to prove it (so your limited resources vs their seemingly unlimited resources…lots of corporations don’t have to be right to win, they just ruin and destroy people simply by tying them up in litigation until they’re bankrupt and have to quit fighting it). The benefit doesn’t seem worth the risk.

I am using the motion sensor for turning on light, it has at least 1-2 seconds delay than using the wyzesense integration. Too bad that wyzesense is no longer supported. Although it still works but from time to time it stops working and have to unplug/plugin the bridge and restart HA to get it work again.

Has anyone been able to get a video feed from the doorbell?

Yeah I did this a while back and then switched back as I couldn’t deal with the delay. Spoilt I suppose. I now have a dedicated HA (slave instance) that only has the wyzesense integration and I use MQTT to pass the sensor info to the main instance. The slave instance is set to restart once a day at night.

You don’t have to post for that. There is a pulldown at the bottom of the thread you can change from Normal to Watching.

Does your wyzesense integration work reliably? Are you using the original wyzesense(which seems hasn’t update for sometime) or any fork? It was working great in the past, but recently it just stop reporting any activity and I had to unplug/plug the bridge and restart HA to make it work.

Yeah, that makes $146M in total funding so far. They did a TON with the last $36M in funding they raised before this, so now getting about Triple what they had before, I am hoping they can really do A LOT more, including up their timetable on a bunch of things that weren’t previously on there like this API stuff.

Holy moley that’s a ton of cash for a company that doesn’t even have a 2K camera.

That’s a ton of cash for a company that hasnt had a single successful product launch not riddled with problems of some sort.

I “discovered” Frigate today… posted on the RTSP thread.

Please, Wyze! Make this a priority.

You’ve seen Joshua Mulliken’s custom integration for Home Assistant, used by somewhere between 1,000-10,000 users. While it is a tiny fraction of your userbase, just to get this functionality unofficially, it’s already used half of your server traffic. If you built your own integration this could be pushed, not polled, and reduce costs significantly.

We even know now some of your own staff would be grateful!
This severely cripples the 30+ automations in my smart home, and I am considering replacing my Wyze products. If you do work on this… add everything Joshua already has! Robot vacuum functionality would be appreciated too.

it’s already used half of your server traffic

Wow, if accurate, this is crazy cool. Where did you get this information? How could anyone even know this unless Wyze announced it? This sounds like wishful thinking someone made up, but if it is true, it is awesome!

Wyze did mention APIs in a recent AMA:

We're the Cam Plus team - AMA! (Summary from Reddit)

Why not make some API’s available as part of Cam Plus?

Thanks for asking this question! We are aware that API requests are high up on the wishlist in our community. Internally we have had many discussions about this topic. I have experience in developing API products and actually, API products are pretty complex. Designing the API themselves is not so complicated, but to make sure everything goes well is 90% of the iceberg below the water.

On the checklist, security and stability are the two most critical things . I want to point out security specifically as it’s one our primary focuses at Wyze. As a result, we need to spend a tremendous amount of effort to build the infrastructure to support API products. We’ll keep looking into this until we can identify a viable solution.

Wyze had a conversation with the dev of the custom integration 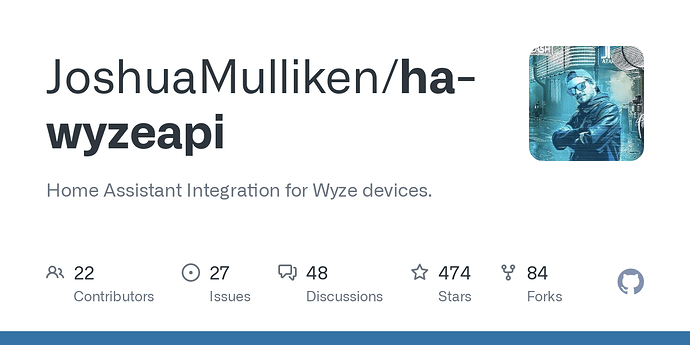 My conversation with the people at Wyze was very productive. We are planning a way forward to continue the integration with HA while being good citizens of their platform.

Based on the information I have from this repo and the limited information they were able to share, this integration is used by between 1,000-10,000 individual HA instances. This number is increasing steadily; however, it is still a tiny fraction of the multiple millions of people who use their services. Even though we are such a small percentage of their userbase, we account for over 50% of the traffic to their servers. This amounts to a tangible cost (monetarily for Wyze) and usability effect on the rest of their users.