I’m having the same prob with SD playback on events grayed out (local storage and playback). V2, V3, current firmware, all worked for months and there has not been any new firmware updates but not now on 5 cameras. One camera is not grayed out. It is running a cam plus trial! How has this broken without an update??? Has been almost two week since this issue reported and no fix yet.

Welcome to the forums!

How has this broken without an update???

What iOS Wyze app version are you using? The issue could be with the app itself and not the device firmware. There have been some app updates recently.

Wyze acknowledged the problem per this forum and said they are working on getting an update out. Still a problem, but there’s a temporary workaround by turning to landscape.

I am running version 2.33.0.17 (shows last update available in App Store 1 week ago) and am still having the issue also. App and firmware all up to date. I broke down and signed up for Cam Lite and the playback started working immediately. So there seems to be some kind of glitch keeping playback from appearing if you don’t have a subscription service and only using the SD card.

Yes. Thank you for the note. I suspect that is the case.

@pearl37920
I am sorry you are having this issue also. This issue was introduced with the most recent app update, it is not a firmware issue. They are looking into and hopefully I will be able to report soon that it is fixed.

i am having the same issue. Wyze van u please fix this? Thanks in advance :).

Welcome to the forums! Here are some highlights that have been stated above.

We have found the issue with the SD card icon grayed out in Event Videos. We are fixing this bug asap and release the fix soon! Sorry for the inconvenience.

This issue was introduced with the most recent app update, it is not a firmware issue. They are looking into and hopefully I will be able to report soon that it is fixed.

Set your notifications level for this thread as “watching” to be updated on future updates in here as this high priority issue is known and a fix is in progress.

Set your notifications level for this thread as “watching” to be updated on future updates in here as this high priority issue is known and a fix is in progress.

Can you temporarily lock this topic to avoid the “me too! me too!” posts? Or at least until the fix is pushed, just in case the issue persists for some users?

I just got word that this issue with the grayed out playback button should be fixed on the 2.34 app release.

Can you temporarily lock this topic

That is an idea, but i think right now we can keep it as is to give folks a place to talk about this issue as long as the contents fall within the Community Guidlines. I will add some updates to the initial post so that the folks visiting this thread can get some of the recent updates right away.

And when can we expect this release to be available?

This will be fixed in app v2.34 which is most likely getting released next week Wednesday.

It is Thursday, I still do not see an update available in the app store

That is because the App Production Release Candidate (RC) was pushed yesterday to the Betas for final test proofing.

VERSION: Android: 2.34.0.b72 iOS: 2.34.0(12) WHAT’S NEW: Added support for a delay between a person being detected on an armed camera and an alarm being triggered Added support for a Home/Away trigger for Wyze devices in Preset Rules Fixed a bug that prevented turning on toggles on the Smart Detection page when using a Cam Plus free trial license (iOS) Fixed a bug that prevented the On/Off button on the Home tab from turning off all light strips in a group (iOS) Bug fixes

You are welcome to become a Beta Tester so that you can get the new releases as soon as they come out.

Update when available and give it a try…

Wyze app 2.34 is releasing today with goodies like a delay between people being detected on armed cameras and alarms being triggered, product search in Shop, Wyze Home Monitoring being added to Wyze Widgets, bug fixes, and more! Read our Release Notes: [image (4)] 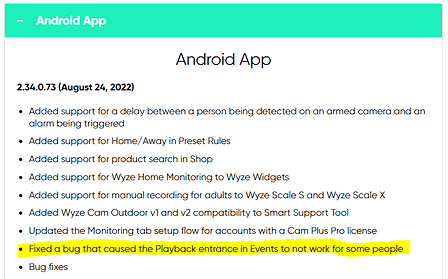 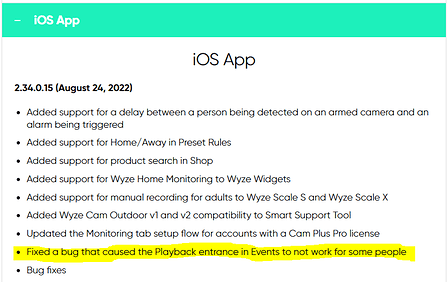 Don’t know about anyone else but playback is still grey here.

Mine is working just fine. Updated on iPhone. Thanks for the update!

BTW, the new “auth” system for the Wyze forums is TERRIBLE! I’ve disabled my shields (ad blocker) in Brave and it still won’t let me log in.

Playback button is working for me with the new iOS Wyze app version 2.34.0 (15), but I never had the grayed out playback button in previous versions: 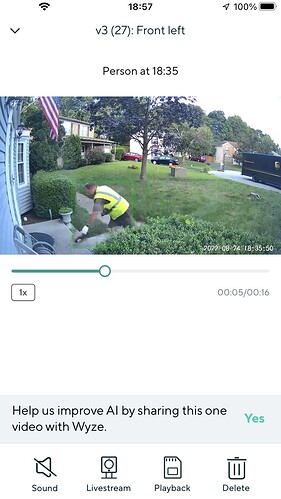 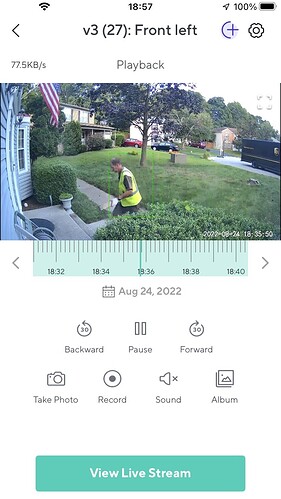 Works for me now (iOS). Playback is available and queues to the event time. Thx!