I just installed my garage door opener with V3 camera combo. So far, it is working just fine on my older Chamberlain and can’t complain about the functionality or cost as it’s a darn good deal.

However, I wish it would be easier to see, at a glance, if the door is open or closed. It seems very unnecessary and cumbersome to have to weed through so many menu levels just to get to the events part of this. Would it be possible to just add this to the “normal” events tab? I mean, people aren’t going to be opening and closing their garage door all day so it’s not going to fill up the events tab BUT would make it far easier to see the last time it was operated and if open/closed. Or, even better, on the main page… I see battery level and if the camera is on or off on other stuff so I think it would be better instead of just seeing “Garage door controller” in the small text, make it say “Garage door OPEN” or “Garage door CLOSED” right there. If it says that, it will be obvious to all that’s the garage door controller

In fact, leave the garage door events where they are and my request would be for the latter suggestion. LOL

Agree with adding an easy to see garage controller button to the home page, it could be green when closed and red when open, or something like that.

That’s not what I was looking for actually. That might be a bit more difficult. LOL! I’m just looking for a status of the garage door as open/closed on the home page. They bring over status right now for temperature, humidity in this area so to bring over the status of the garage door should be some “easier” coding I’d thing. If they could do a button on the home page that would be nice too but I’d like to see them do something easier quicker first. haha!

I agree. Why not add simple status on the home page or the page where all the devices are listed. I have Wyze lock, that shows it’s locked. Or open. Why not do the same for Garage Door?

I would go one further for both locks and the GDC, provide the button to open/close on the list of devices screen. So we don’t have to go thru additional screen to do this.

BTW - the picture in the list of devices is NOT live it’s the last snapshot, so, the garage door may be open even though the picture may show closed. 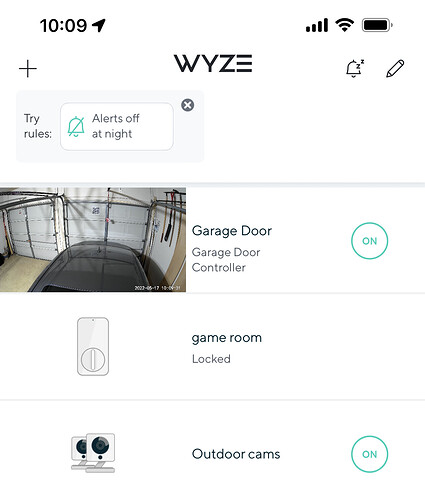 Agreed. Instead of the On button, I’d rather have Open and Close buttons. Wyze, please note that I do not want a Toggle button. I could be wrong, but I can’t imagine anyone wants to toggle the state of their garage door; people want to either open or close it. (Of course, if it’s already closed, pressing the Close button should do nothing. Same for Open.)

Although all of the cams display the last thumbnail, somehow it’s more of an issue for the garage door. Maybe the garage door could automatically update its thumbnail every 15-30 minutes?

I see lock listed on the main screen along with my cams. So to look at lock events, I just open it and see it.

Please move GDC to main page similar to the lock.

Agreed. Instead of the On button, I’d rather have Open and Close buttons. Wyze, please note that I do not want a Toggle button.

I like this idea as well, but I’m going to guess that your garage door remote and the one on the wall has a single button to ‘toggle’ the state of the door, and with that being the case, the GDC is only “smart” enough to ‘push’ that single button to mimic what your remote and wall button is capable of doing.

Perhaps utilizing the AI of the Camera staring at the QR Code on the garage door, they can make this two buttons of Open, and Close a reality.

That said… one of my wyze cam’s in the garage detected a ‘Person’ in the garage just past midnight (there was most certainly no one in the closed garage at that time (I even verified with footage on my Amcrest Camera in the Garage, meanwhile, my V3’s in my backyard have lost the ability to see a Raccoon walk right past it (last year it was doing fine, many, many Raccoon clips made it to the cloud)).

So, the question is, can we trust the V3 Cam in the Garage to see that QR Code 100% of the time to trust that my garage door is in the proper position?

It takes just one ‘whoops’ where the AI might see a phantom Cat and Dog party in my garage, or didn’t see it… or… Al Gore takes the Internet Down, and now I have no AI to read the QR Code…

I like this idea as well, but I’m going to guess that your garage door remote and the one on the wall has a single button to ‘toggle’ the state of the door, and with that being the case, the GDC is only “smart” enough to ‘push’ that single button to mimic what your remote and wall button is capable of doing.

Perhaps utilizing the AI of the Camera staring at the QR Code on the garage door, they can make this two buttons of Open, and Close a reality.

And, with the camera, we can always double-check the door’s status, if we’re not sure the Wyze cam’s “AI” is right.

(I’m still not sure why we need the QR code when it should be trivial for an “AI” that can [usually] detect people and vehicles to tell the difference between an open and closed door.)

I just happened to notice the other day that this is NOW on there! No longer does it just mention it’s a controller. It shows Door Open or Door Closed. Mine was showing Door Open for hours even though the door was closed but then I updated the firmware for the garage door box and it looks like it might be working. I opened and closed the door from the app and when it got closed I waited a bit and it still showed OPEN but then refreshed the page and it went CLOSED so maybe I just should have waited a little longer

I’ll test it some more but looks like this is there now. Thanks, Wyze!!!

I’m glad it’s working for you all. I have had a disaster of a time with the original garage door controller/V3 bundle and with the replacement controller they sent me. Here’s my post: When I first set up my combo v3/garage door controller, it worked great with my Genie 2028 garage door for about a day. Then the open/close button disappeared. I have been back and forth with Wyze support numerous times (sent numerous logs). I have deleted the camera and set it back up. I have hard reset the camera and set it back up. I have power cycled the garage door controller dozens of times. Sometimes the open/close button comes back, but usually not and if it does come back, it stays for an hour or two and then disappears. So, I have been patient hoping that Wyze fixes this obvious firmware problem. But my patience is coming to an end. Last night, my garage door opened all by itself at 2:51am. I have another camera in the garage and it caught it in the act with the garage door controller light blinking numerous times…It did the same thing a week ago at 5pm when I was in the garage working (it just started beeping and flashing and then the garage door opened). So beware if you are using this garage door controller. This thing is not baked…I forgot to mention that the Wyze support person just stopped responding to my emails…nice. I would love to know if the random opening is due to a firmware bug or some engineer in China remotely troubleshooting my controller. Either case, not good.

Here’s just a thought… with the replacement controller, did you also replace the CABLES? At least the portion of what you are describing sounds like a bad connection which could be caused by the internal port to the controller or a bad cable itself. If you didn’t change out the cables/cords, maybe try that?

I just happened to notice the other day that this is NOW on there! No longer does it just mention it’s a controller. It shows Door Open or Door Closed.

Thanks for the heads up that this is there now

My Garage Door Controller was in a group with two Pan Cam V2’s, so I took it out of the group and back to the Wyze Home Screen to see if the ‘status’ of the garage door was there. 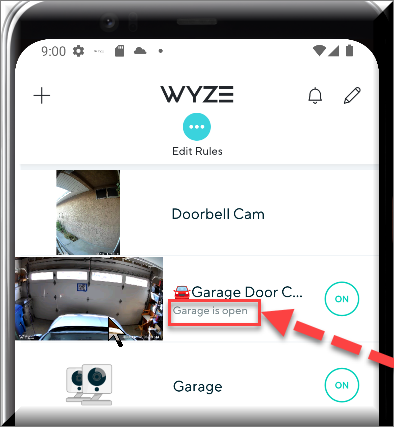 Mine gave the wrong status initially too then I opened/closed the door (using the app) and refreshed and it seemed to work after that.

Yep, that fixed it here too, thanks,

Wyze sent me a new V3 camera / garage door controller bundle. I installed it yesterday and everything worked. It’s still working today but today I noticed the main screen lists that the garage door is open when it really is shut. So I recalibrated it again and now it stays it is closed. I hope this is not going to be a common event. I don’t understand why the app thinks the door was open when the QR code was in plain site…. ???

I setup the new camera, calibrated it, and then the next day (with no changes), the door status was out of sync. A couple days I’m and the controller hasn’t disappeared like the first two units. Wonder what the problem was with those units?

Of course I spoke too soon. I just checked and the app says “Garage door open” but it is really closed.

WTF is wrong with this product???

Beyond being a calibration issue, saying it is open when closed is often a symptom of either the camera being too far away from the QR code or not having sufficient lighting. Can you provide a screen snapshot of the QR code?