As the title states, I’m getting notifications that my garage door has closed, when it hasn’t. Most times there was no movement within view of the camera at all from what I can tell. I have recalibrated the QR code a few times, but the problem persists. Is anyone else having this issue? I am using my own v3, not one that comes with the kit. Outside of this strange issue, it otherwise seems to see the QR code just fine and I get the correct notifications when I open and close the door (of course I don’t get a closed notification after the false one).

Can you verify the controls to open and close the garage door from the app are working as intended?

Yes, the door opens and closes fine with the app, I use it many times every day. Even after the false notification it’ll close just fine from the app, but it does not sound the 5 second alarm first though - since it thinks it’s already closed.

Strange, when it says it’s closed do you see it in the history? Does the garage door do anything, or nothing at all?

Very strange for sure. The last notification in my screenshot was a false one, my garage door is still open. When that false notification happens, the door doesn’t do anything at all. I’ve been in the garage (behind the camera) when the notification occurs and there wasn’t even any motion that would have been seen by the camera.

I took this screenshot at the same time I took the one above. Don’t mind the mess of crap behind my car, doing a little cleaning LOL.

Sorry, not sure how to help you from there. I think @carverofchoice or @spamoni4 has a GDC and can help you further. Sorry!

The last notification in my screenshot was a false one, my garage door is still open. When that false notification happens, the door doesn’t do anything at all. I’ve been in the garage (behind the camera) when the notification occurs and there wasn’t even any motion that would have been seen by the camera.

The GDC is supposed to require the QR code sticker be visible in the calibrated position before declaring the door closed, so for it to report door closed when the door is open and the QR code is out of sight sounds like a malfunction to me. You may need to contact Wyze support for a replacement (they may also know more about the situation than us). @WyzeHongfei, any other possibilities?

I am using my own v3, not one that comes with the kit.

On a side note, how are your legacy RF remotes working with an unshielded camera controlling the GDC? If the remote’s range has been reduced, then you may be able to get away with wrapping tin foil around the V3 pigtail. I do not believe this is related to your false closed reports, though.

No worries, I appreciate any input!

The QR code is directly in front of the camera, it’s right on the other side of the bracket that can be seen in the screenshot, but I can’t see the code in the picture. Maybe the camera is somehow picking it up? 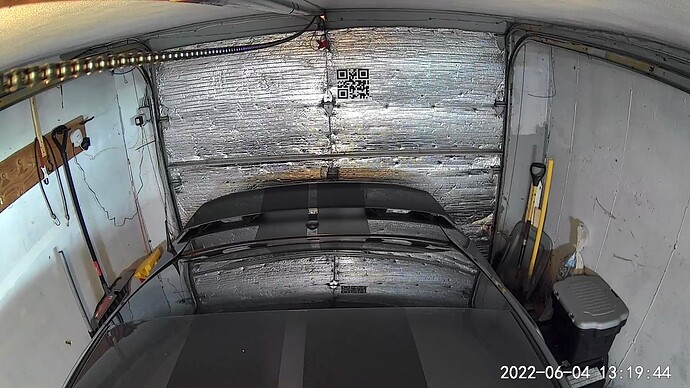 I actually don’t have any legacy remotes. I have a keypad that rarely works right anyway, and then I have used a Wemo Maker for several years.

Your QR code placement looks perfect. I can’t see white space around the code, but I assume it is there.

There is a failure mode that says if the code is hard to read (camera too far back, poor lighting at night (no IR lights)), then you may run into a situation where the camera “looses sight” of the code (can’t read the bar code) long enough to declare the door open. Then when it regains sight it would declare the door closed. I do not see that as a possibility for you, and yours is not that failure mode anyway, as your door is really open, and the QR code is not in its calibrated position.

Yours is where it supposedly sees a QR code where no code is visible; certainly not one in the calibrated position. So I suspect yours is a malfunction of the hardware. But Wyze Support may know more, so good to give them a call.

Could you get a picture of it when the doors really open? Make sure these nothing it could think it sees?

Sure! Here ya go. I’m pretty sure it’s done it with and without the car in there, though I can’t say for 100% certain. It’s inside far more often than outside. 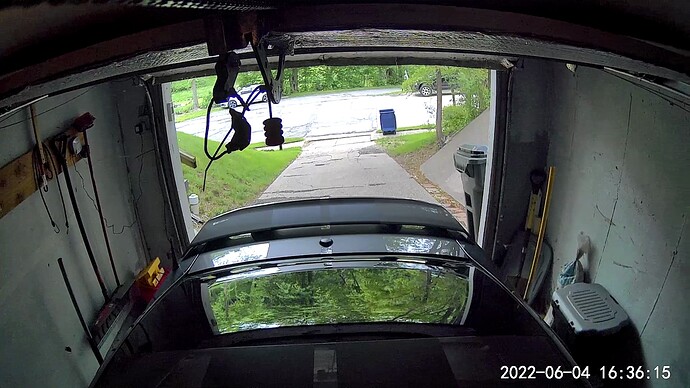 Hmm, yea that’s strange… try deleting it from the all and setting it back up, only thing I can think of. Also make sure the cam, the controller, and the app are up to date

I thought about that too, but at this point I think I agree with Newshound that it’s probably a hardware issue. Maybe after a couple beers tonight I’ll feel more motivated to do that

Also, not that it should matter I don’t think, but I do have my Wemo maker still hooked to the garage door opener. I use it as my wall switch mainly now. I would think if that was causing an issue the garage door would actually be closing.

Sounds like it’s time to start a support case with WYZE.

You already know, if any of us trying to help knew exactly we would tell you. So, you are sort of a “tester” for us to help you. I hope you will forgive some of the suggestions, to get to the root of this.

My suggestion is, maybe that shiny insulation on your door is interfering with the GDC’s read of the QR Code. I recommend, putting some white paper along the sides of the QR Code to make the code stand out more separate from the insulation. Just a hunch. And I don’t blame you if you choose not to try it.

Not a bad idea, but the QR code is not visible when they have his issue. The door is open.

Absolutely, !00%! I knew there might be bugs when I installed it, and I am good with random suggestions. I’ve been in the tech field professionally for 23 years, so I’m not new to troubleshooting and trying random things that don’t make sense and then being surprised when they actually work LOL.

I actually submitted a ticket earlier tonight. It sounds like this is a known issue and they are working on a solution already.

I have the garage door controller installed in the garage side of our barn. On partly cloudy days, i get door opened and closed notifications as the light level changes when clouds pass overhead - 100 year old barn, lots of places in the siding where light shines through.

Welcome to the user-to-user forum, @markjinin!

That is from the camera “seeing” then not seeing the QR code, maybe from intermittent darkness or glare as the clouds pass overhead. What you can try is moving the camera closer to the QR code, or having night vision and the IR lights turn on at dusk conditions. It takes 20-30 seconds of not being able to discern the QR code before it will declare the door open. If you can reduce that length of blindness it would help.

Mine went nuts yesterday and “opened/closed” a couple times (without the garage door moving at all). It’s the first time it had done that, usually it just “closes” and that’s it until I actually close it again. Very strange. Still waiting on that fix WYZE support said was coming. Thankfully it’s just a notification, which is not really a huge deal to me in the grand scheme of things, and the door isn’t ACTUALLY opening and closing randomly