Hi @R.Good we’ll fix it in v2.29 which will be released in the middle of March.

@WyzeGwendolyn The hardware limitation was only a thing once the September 2020 update was introduced. That’s not the same operating item that we once paid for. It’s speaker functionality has been altered through SW to become what is NOW being called a limitation.

Serious question: Who’s idea is it to STILL stand their ground on this liability issue? I mean just revert the freaking SW back to where it once was where everyone was happy.

I wasn’t aware of any major thread where folks were complaining about blown siren speakers from the volume being too loud. If I missed something, please share that discussion here.

Also this issue is going soon on 6 months… when does it take a serious priority to the @WyzeTeam being how long the issue has been already ongoing for.

Thanks for the feedback, everyone. I’ll get these links over to the team for consideration as well.

For the bugs that were not addressed since they did not make the top 3, can they still be fixed since they are still bugs?

I reported those to the team, too.

This new Fix-it Friday program is meant to prioritize bugs people are seeing.

I missed out on participating in this Fix-It Friday, as I was out of town for a funeral. I probably should be waiting a month or so until Fix-it Friday rotates back to these forums, but thought it prudent to state for the record that LANDSCAPE MODE on iPads and Android Tablets is indeed a BUG worthy of being discussed on Fix-It Fridays.

I consider the Landscape issue on iPads to be a Bug, and also to be a Bug that has been ignored by Wyze for over Four years. (And I can’t get a straight, honest answer out of anyone at WYZE on this question, as to why does this BUG continues to be ignored)

Given that my initial request was made FOUR years ago, would you please bring this up at your earliest opportunity to those within the Wyze management group who can make this happen? Feel free to use my personal situation (and this post) to illustrate the importance of this feature. After doing so, would you then kindly report back and let your customers who use tablets (and future customers) know what to expect and when? As I’ve stated previously, if the answer is that app-wide Landscape mode (for tablets) will NEVER be implemented, then please just tell us that. Thanks

Looks like Fix-it Friday will be available in all Wyze Communities… a welcome change, I pretty much stay here in these forums, and rarely venture over to Reddit or other places. 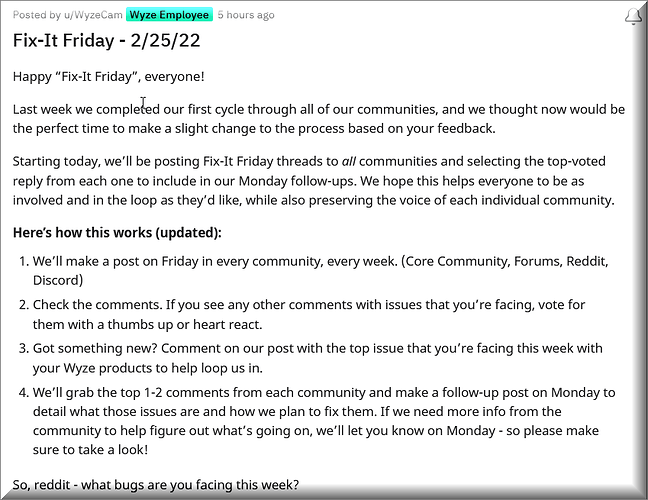 Does anyone know what the Window of opportunity is to post in Fix it Friday?

My understanding is that it opens sometime on Friday, usually the last half of the day (based on what I’ve seen), and for the rest of the weekend it seems anyone is allowed to post bugs and vote on posted bugs. It seems that votes count up until sometime on Monday when they collect the highest voted on bugs and then write up and post a public report on those.

Unofficially, in practice, the bugs that are posted the earliest get the most exposure, and therefore the most votes for the most part and are thus the mostly likely to be chosen. So the earlier you post a bug the better because those posted on Sunday are already far behind the ones posted on Friday, BUT Gwendolyn did say that all the other bugs were reported to the team even when they weren’t the top ones being reported on, so don’t feel like it ever too late to report a bug (or vote on the other ones up through Monday), it just might not be one of the top few that gets a detailed action plan or explanation, and someone might add it in earlier to the next time. For example, I took a couple of the bugs from this list and reported them in Reddit, hoping they would get more votes this week so we can get a report on them.

I mostly stick to this forum too, SJ, but once in a while I will venture into Discord to Reddit for a few events if something special is taking place like an AMA or a Fireside or something.

I have also been wondering about this.
How do we enable them?
#wyzecordlessvacuum
#wyzehandheldvacuum
#wyzenightlight

@WyzeGwendolyn , any update on this issue?