Events not recording all of a sudden

So anyone know why my Wyze cam 2’s have stopped recording motion events? I did nothing to change any settings. We went on vacation and I noticed nothing had been recorded the last few days we were gone. I have SD cards in each cam and each one is set to record events only.

Just to confirm, it’s only the local storage “events only” that stopped working that you are having an issue with? When you visit the playback, nothing is showing up? Does the cam still recognize the SD card?

It still shows the SD card and the amounts of storage left. But when I go to a specific cam and hit the “view playback” option, there are absolutely no events being shown in the timeline. Prior to us going on vacation we’d have numerous event videos recorded throughout the day

If you pull the card, do the events show in the file directories? I’d suggest a rule to reset the camera every so often to keep everything fresh. I have a rule that resets everything each night

It usually takes a second for my cameras timeline to populate with the event markers after clicking playback.

I restarted all the cameras via the Wyze app and events seem to be recording again. One thing I don’t get though is when I go to view playback, why am I getting this screechy staticky sound occurring even on the timeline where there are no events?

I think a rule like this will help you. 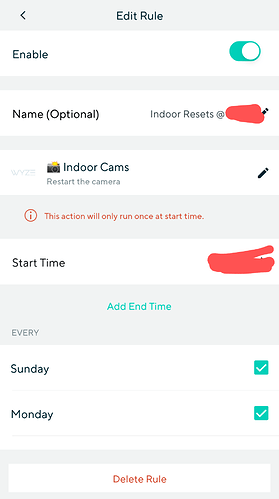 Couldn’t tell ya, if you hit playback and nothing is showing up because you have no events, nothing should be playing. What color is your timeline? White or wyzeblue?

I lost all motion events on wco starting this morning. Makes no sense.

I moved the cam plus to v2 and works flawlessly.

I have lost motion and person detection since update two days ago.

There was actually someone in my office who left a box in the lobby and it was not detected on the camera.

I got 1 back this morning but the other one is still not recording anything. Go figure.

I’m going to uninstall the update, but I won’t know if it works because the camera is remote. (the only way I know it didn’t work after the update is because another camera (a v3) at the same place triggered and recorded a person, but that person would have had to walk past the v2 camera - which missed them…

I also just noticed now that the option to “revert” is not available on iOS, although I can do it from my Android by checking the current version, then clicking “Have a problem” where the last few firmware updates are shown. No such “Have a problem” option on iOS.

After the update, did you verify the settings on the camera we’re where you wanted them? Also doesn’t hurt, and actually helps to have the camera reset itself fairly often so that things stay fresh and settings remain updated from the cloud. Sometimes during firmware updates, settings revert or change so it’s a good practise to triple check that things are where you want them. If you had access to the camera, you could do a manual firmware flash to a previous version with the use of a sd card and a computer. If you do that, once again make sure to verify your settings after to make sure they are where you want them.

What app version of ios, and what version of Android are you operating? The difference could be contributed to the Android being on a beta app software, and the iOS being in production software, not a mess just different app versions. Only the beta app branch of things has the revert firmware feature, and to my knowledge the android and ios should both have that ability.

Don’t forget to clear your Rules History or your Cache Files if you have more than 1000 + being saved ! It has no effect to the videos on your cloud it’s still on it for 14 days. Also have your cameras set to restart atleast once a day that’s what I do to have continuous recording without a micro Sd card ( I was worried my card would be taken so that’s what I do to get around that lol )

I had the same problem. I removed the SD card and reinserted and it began recording events.

…My settings all stayed the same after the update…

However I read in the release notes that they “Adjusted the motion detection sensitivity per users’ feedback”. That’s all it says. I guess they de-sensitized it. Anyway, my camera is remote and I can’t easily get to it to experiment with new settings so for now, reverting back works for me…

Tx for all the suggestions though…

How do you revert on iOS? I am having this problem. I have done all the troubleshooting including factory reset.

If you don’t pay for their Cam Plus -Smart Detection, the option to record appears to have been removed. Now it will only take picture. That’s a foul play. Luckily I only bought 4 Wyze cameras.

Today, Wyze reported no detections in Event tab., all a sudden.
but
I can find events in Playback from sd card.

what is the problem?

Yup, I was a massive wyze backer from their inception, but I’ve had it with their lack of response to user feedback, their unwillingness to integrate RTSP as a SUPPORTED and OFFICIAL service on their cams.
After spending an inordinate amount of time analyzing competitors, options, costs, and features, I have moved all my cameras over to Eufy cams!
Not only do they tick all the features off, they have many camera options.
I swapped all my Wyze pan cams and v2s over to their 2K indoor security cam,
they are available for $45 from Amazon, cheaper than Wyze’s pan cam, and only $10 more than the Wyze v3.
The response time is sooo much better than Wyze video display time, it’s at 2K resolution, much better than 1080p, the RTSP service is built-in and fully supported, the cams have AI onboard the cams, person and pet detection locally, local recording to either SD card in cameras (both 24/7 and event options), cameras have siren available on each cam for use in security apps, and best of all, NO recurring fees!!!

How is the eufy app compared to wyze?