I have several Wyze cams 2 and 3s. One of the Cam 2s frequently stalls about 2 or 3 seconds into the 12 second playback. Once it stalls, it never recovers. The rotating arrow just keeps spinning.

Any idea what’s going on? How to fix?

Where is it mounted in relation to it’s wifi source? What’s in-between the two as far as objects, house construction and materials? Sounds like the uploaded event is glitched or corrupted. Can you switch it with a good cameras in its mounted spot and see if the issue follows the camera or stays in the location?

It’s about 20 feet from the AP. I never have an issue viewing live stream. I have other v2 cameras which are further away form AP I have no issues with. It is always this one camera. It’s always when I’m playing back the 12 Sec video and after about 2 or 3 secs when it freezes. And it’s not with every playback, maybe 9 out of 10 times it happens. If we’re a WiFi issue I would expect the playback to stop playback at different times during playback and buffer during live streaming.

Don’t think that is it.

I have the same thing happening on 2 of my Version 2"s.

Do the farther v2s have the same home content, construction materials in-between them and the app? When you are live streaming, you are connected to the camera, when you are trying to watch the event videos, you are watching from the cloud. What troubleshooting have you done? Have you tried my suggestions above?

The v2 that are farther from the AP are behind two concrete walls.
No, I have not tried what you have suggested.
The only way I know how to connect to the camera is with the app. What I have posted is what’s a happening.
What is the other way you want me to connect? I don’t know of any other way.
I didn’t know I could watch from the cloud. How do you do that?

If others are having the same issue this must be a bug in the software or defective cameras.

I have the latest firmware. My camera is still under warranty, Do you think it’s broken?

Whenever you watch a clip from a notification, or watch a video from the event tab, that is pulling the video that is uploaded to the cloud, or attempted to. When you live view, or watch from “playback” you are connected to the camera itself.

The trouble shooting I wanted you to try was to take the problem camera, and swap it with a camera (unplug camera, move to another cameras location, swap then take the other camera and put it in the place where the problem camera was. This tests whither the issue moves with the camera, or stays in the location.

I get it. I thought when one was viewing playback it was from the camera, which is wrong.
This means one could watch the 12 second playback even if the camera was off… Right?
Yes I have swapped camera locations, still a problem.

From what you are saying this would eliminate the memory card is being the problem since it’s not involved.

. I thought when one was viewing playback it was from the camera, which is wrong.

This is right actually. In the Wyze land, when saying “Playback”, that’s pretty much automaticly referring to the playback of the sd card footage function, due to the name of the button on live where you go to the area to view sd card footage. 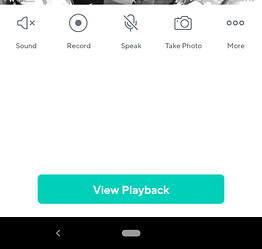 You can “play back” or watch anything.from the cloud when the camera is unplugged, off, on whatever. Once events hit the cloud they are there for 14 days, or till you delete them.

But yes, the problem is either camera to cloud, or cloud to phone or whenever device you are using the view the app. Since you said you ruled out camera locations, that may not be it. Since no other cloud clips have an issue that rules out cloud to your device. Leaves something with that specific camera. Have you tried a manual firmware flash to either the current firmware or a previous firmware version?

Not sure how to do a manual firmware flash. Only know how to do the firmware upgrade through the app. (I’m iOS). I am running the latest firmware.

If you tell me how to do manual update I will. I don’t think that will solve the issue, as I seem to recall having this issue with the previous firmware.

Oh, and did you see others are saying they have the exact same issue? So I’m not the only one.

Manual firmware flash instructions if this was something you wanted to try.

Thanks, I will give this a try.

I have the same problem in watching the iCloud clip all of my v2 play a few seconds then spinning wheel.

I also have this problem. If I go from the notification it occurs nearly 100% with all V2. I have a work around which is to push the slider a few times until I get to 12s. Then after it thinks it is finished and allows a re-run I tap that arrowed circle to rerun and magically it
plays uninterrupted. It’s a software glitch FOR SURE.

Just tried your trick with the camera I have it that worked. You are right, this must be a software bug.

Thank you that trick worked for me. Must be a bug. Hope it is not the new protocol wyze said they were switching to for cloud access. It was supposed to stop the spinning wheel on viewing clips.

ALSO, I have a SD card. If I tap Playback that works as well, since it ignores the cloud.

I have the same problem (and other playback issues) on ALL my cameras. V2, V3 and WCO. Happened with an accidental app update late last year. Recently video quality has degraded drastically and playback has not improved. The V2 doesn’t move and is the closest to my WiFi. The others are moved all over the yard but the issue never changes. The other night we had 3 events on one camera and couldn’t get any of them to work.