Bright light captured at night. Reflection off a pic odd

The whole thing is very facilitating. The way the light appears, the light action, definitely makes me think tv or cable box reboot. Any other electronics in kitchen?

A couple other observations have me leaning more towards the light is coming from kitchen since the shadow on front door seems far from divider wall and glow from tv would have lesser angle and glow left door too, I think. Also, the tv is on table, lower, and front door ceiling would be more lit. 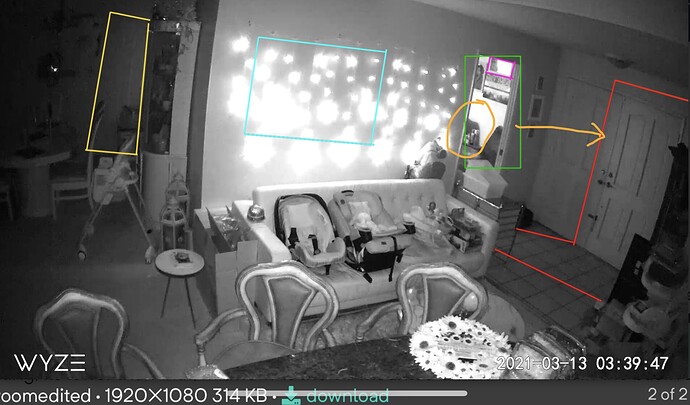 Also the shadow on the left chair would appear to be coming from kitchen vs directly across from the tv location.

Hard to tell but from Wyze cam location, the angle of reflection is more toward the kitchen area right of tv and doorway. And then the motion, clearly appears to be something moving. Were the party streamers up? Any air circulation?

I think you need a month of CamPlus to extend recording and eliminate 5 min interval. Assume there is no trigger or recording when light goes out?

I am leaning that way now also. I was thinking it was a small room over there, not a whole nother section of house with kitchen. Once I saw this in the photo above, I started really leaving towards kitchen and light. 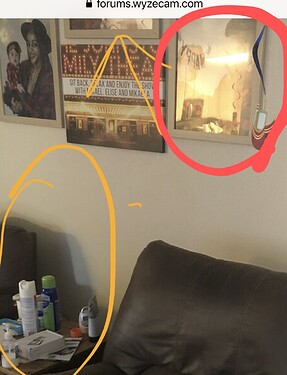 You can see the kitchen in this reflection. And from the angle of the photo, it’s similar to the angle that the Wyze cam would see from also.

Yea no one got up, me and hubby had actually went to bed about 40 mins prior to the video. I guess it could be the kitchen but the movement “figure” still freaks me out. We have the typical microwave, stove, dishwasher, the big light in the ceiling. I don’t know why that light would come on and so brightly. This is the camera right now with the kitchen light on just regular since I’m still up. But it doesn’t shine in the dining room which still makes the super bright light that illuminated in that room also very weird. Thank you all for trying to help me figure this out. 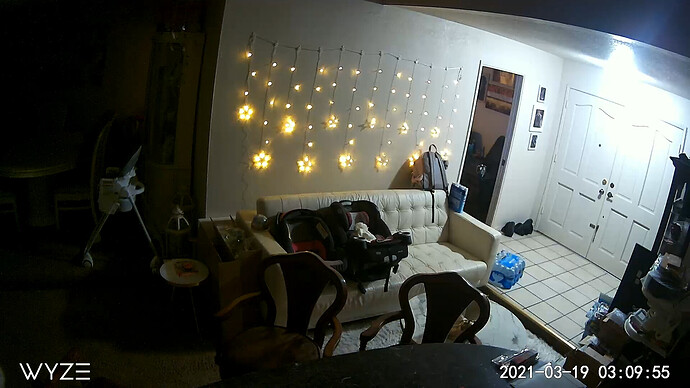 We have a baby less than a year old

Occam’s Razor says you are both seriously sleep deprived and one of you went to the kitchen for a snack or bottle and then forgot about it.

Occam’s Razor says you are both seriously sleep deprived and one of you went to the kitchen for a snack or bottle and then forgot about it.

And replaying the way the light appears, a little weak at first then moment later more pronounced, like a reveal … I’m thinking fridge door. I know this lighting from experience

That can’t be though. You would of saw one of us walk past the double doors from the hallway into the room then to the kitchen. I wish that was the case though. I’m just going to have to chalk this one up to unknown probably and just not look at the camera so I don’t continue freaking myself off.

But since I’m here let me upload the first time I noticed this. It was different and I just chose to ignore it but I would like to see you guys opinion ok it as well if you believe it’s the same. This video clip was back in December. Compare the 2 for me. This one wasn’t a figure movement but more of a flutter.

Fair point. You might consider adding CamPlus on the camera for a month and get more recorded?

You would of saw one of us walk past the double doors from the hallway into the room then to the kitchen.

Let’s not forget that the cameras sometimes miss, AND that you apparently don’t have CamPlus, so we only got the 12 seconds AND there is a 5 minute blocking period. It’s entirely possible you walked in or out of the frame and the camera started recording ONLY when the sudden light triggered the camera’s motion sensor.

We were laying in bed talking at this time so I don’t think so but I’ll just say maybe hubby did and the timing is off. Doesn’t explain the second video i posted above but I think I’ll let hubby look at this camera when/if it does something odd again because I don’t want to freak out anymore especially since we can’t move right now lol. No point being paranoid in my own house.

Okay. Intruders are really, really unlikely to come and go without taking or doing something. It’s probably just you guys. You might want to (a) pay a few bucks for CamPlus to get longer recordings as @Mark5 suggested and/or (b) get another camera in the TV area and/or ( c ) move an existing camera. Good luck.

Oh, almost forgot! If you have an SD card in the camera, check the longer recordings there! If you don’t, find any old SD card and put it on there and turn on continuous or motion recording…

Oh I wasn’t thinking intruders at all lol. My husband said it looked like something out of a horror movie. Even though I don’t believe in that stuff I also don’t want to think there’s ghosts are a portal in my house lol. Yea we don’t have a SD card but I will look into Cam Plus

Well then I can help you with that. You don’t have ghosts or a portal in your house. Rest easy and enjoy that baby!

Looks like maybe a 2nd Wyze cam needs to be placed in that room with a sd card or something. Just untill this is figured out if that’s your oreference. You can have them set to only be on or record at night but that should catch who ever has their hand in the cookie jar.

Okay, here’s a thought… It’s either the TV or something other ‘light source’ that is ‘brought up’ to full brightness…

If you look, it takes a couple of seconds for the ‘light’ to come on… This is usually what happens with a TV coming on… Pixels ‘warm up’ (quickly) when coming on, but they are not ‘instant’ unless the device has just been turned off.

Then, I suspect that the ‘movement’ is in fact just something on the TV that’s moving and the angle of the location of the camera (higher than head height?) with the angle of whatever is hanging on the wall (most things tilt downward if they are ‘hung’, even if it’s just a tiny bit) can do that.

Based on the angles, I’m fairly certain the kitchen is what is visible to the camera via the reflection. Fully agree with the late-night-snack-with-sleep-deprivation-induced-amnesia theory (or just sleepwalking).

If you want to solve the mystery and can’t move the camera, the only solution is to get a second one. Also, definitely pop some SD cards into those so you can check out what is going on before and after the motion detection is triggered; you can get decent ones for next to nothing these days.

I pinch zoomed in on that section and the movement is like the top of someone’s head. I’ve read “the reflection” is off of a picture, but it looks more like a mirror since I can’t see the entire picture from any of the ones in the thread discussion. As for your TV booting you can check the date it was last updated and see if it matches the date this occurred on - TVs sometime will boot up for an update assuming the brand and background boot up settings, but I find that brightness of light unlikely.
Next possibility. Do you have any smart lights in that adjoining room? I have Phillips Hue lights downstairs and in my bedroom. There have been a few times they ALL abruptly turn on max bright at odd times in the wee hours and it’s freaky! It has woken me up since one is a reading light next to my bed. I turn them all off with the Hue app. A few times they all turned on 2-3 times at night. It is/was a known issue by Hue.
So if you don’t have either your TV rebooting due to an update which don’t turn on that bright based on either video and you don’t have a smart lightbulb in that other room then… you either have some paranormal activity or some other strange activity going on. Maybe it’s tied to having a new baby as I’m assuming you’ve been in the house for a while. In my Caribbean culture we tend to believe deceased relatives sometimes stop by to visit new offsprings. But I tend to believe it has to be something as simple as technology at work.

It’s a picture, not a mirror. No, no smart lights. Just an Alexa in a different room. We’ve been in the house a little over two years and had the baby summer last year. Dunno if that’s considered a while.

I doubt it’s sleep walking like mentioned above seeing as my husband isn’t graceful at all and I wake ever time he gets up. Only like I can think is the kitchen light if not tv. It did look head shaped to me which was concerning and brought me here. but thought I was tripping. I’m just not going to look at that camera if I really don’t need to. No need freaking myself out or over analyzing something we can’t fully find a solution for, Thank you guys all so much for your investigation and help.

Is there a window on the other side of room, from what I can see it looks like a car drove up. Someone got out and looked In the window, If you look very carefully you can see the outline of a head and shoulders moving in and out of the frame on the right side in the reflection off the glass front of the picture.

Late to the party.
If that room is off the back of the house, and your neighbor has a bright light the v3 will show it like daylight. If they move on their porch obscuring the light path you will see that as movement.
If the room is near the front of the house, could just be a car with people or something moving in front of the lights.