How do we get more people to ask for a loud siren? Just maybe, that will get the technical people to work on this. Thanks

We have been asking and they keep promising a solution for awhile now. Sorry to say I am not too optimistic, but I still hope they do.

I believe in the past Wyze did a survey, but I don’t remember. This was being asked for since 2019. On this thread alone, there are at the moment of this post 275 requests. 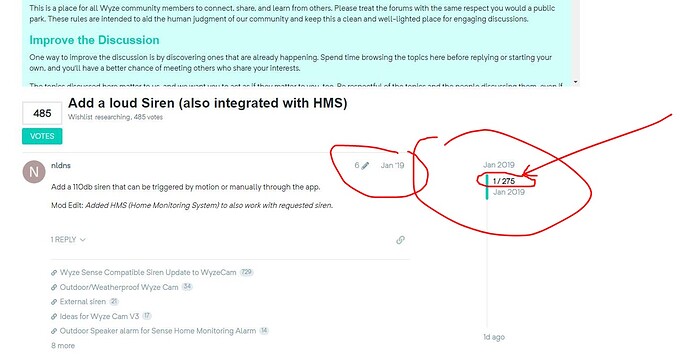 With all due respect to Wyze management, but it’s evident these are kids with a great idea and a decent reach to funding. Other than that, their support, marketing strategy and customer service is less than desirable. People like these only change when there’s a better competition, so it’s basically until there’s something better, they’ll do what they’ve been doing…other products/services that has NOTHING to do with security, getting the $$$$

Security alarms are meant to first deter, then scare away culprits and a lack of decent siren will allow them to take what they want before paid service agents contact local authorities. They will be long gone with stuff before cops show up.

Wyze needs to have a chime that goes along with the hub for HMS, If you have a big house you might not hear the door opening, Plus I know I **Cannot hear anything the hub says when i am near my exterior doors **

I can’t for the life of me understand why Wyze can’t find a commerically available Siren, and adapt it to a Wyze home security system. Can someone explain why this isn’t possible. Thankyou

How about additional sirens for wyze sense. My router is located to far away to be easily heard and an outside siren

Been asking for over 2 years.

Wyze home monitoring. I love this whole system its amazing. Except for 1 thing… the siren isnt loud enough. I think you should develop and siren that is loud enough to wake someone up at night… most all security systems have a very loud siren. So there are some systems that use zigbee or if there is a way you should make a sensor that can be added to the home security hub that will subsitute or add to the siren. Make it pair like all the other sensors and lrogram it to trigger a loud siren.

Can you confirm the Firmware Version you have on the Hub right now? There were issues with older firmware versions decreasing the Siren volume but that was fixed in a recent update. I want to be sure you have the most recent Firmware so the Siren is as loud as it can be.

Also, in the Settings

for the Wyze Sense Hub device, make sure your Volume is set for High.

Sound like you accomplished a lot. Now would you PLEASE add a loud siren to your Home Security System.

[Mod Note]: Your post was moved as your subject matter is a departure from the #beta announcement topic. Please avoid diverting a topic by changing it midstream.

I have 5 Wyze cameras set up and if one of them detects a person at night it will set an alarm off on the others.
I love this feature for scaring off intruders except I’d also like to have an alarm that I can hear inside as well.
Maybe just a little speaker that will sound an alarm in my bedroom when the cameras alarms are set off. I would definitely buy this!

You will be glad to know that this is now in-development. I do not have much to share about it yet but it is happening.

Is this different from the “Universal Chime” that the VP mentioned in his AMA and from what Gwendolyn mentioned in Fix-it-friday to allow us to add chimes to HMS to have a siren in any room?

Any plans to increase the volume for the home security system? Maybe add a chime?

We’ve heard your feedback and are working on supporting Wyze Home Monitoring audio on Wyze Chime. This will allow you to decentralize the audio and have it in the rooms that you care about. We’ll share information about it when it’s ready!

Regardless, loving the fact that “Loud Siren” and “Integrated with HMS” is officially “in-development” & I look forward to any info on this as it comes in.

Thank you for some positive feedback. It’s reassuring to know that someone is actually listening. Thanyou, I’m Maryann’s husband John

Let’s hope they get this going quickly. There are so many other ways to make this a world class system. Glass break sensors, smoke, CO2 sensors, outdoor temp sensors, refrigerator/freezer sensors, medical alert type service. This is a good start but hopefully they will keep developing for our HMS.

Let’s hope they get this going quickly.

I do not have a timeline I can share yet but you are correct there are many ways we can make HMS better and we are aiming for that. This was one of the items that was heavily asked for so we started with it.

I followed your instructions and it works great for me!

I have a 3rd party siren (purchased from Amazon) plugged into “Siren”. The siren is in the middle of the house, where it will awaken everyone in the house, even if their bedroom doors are closed, which is typical.

Here’s how it works: When I Arm the Wyze monitoring system at bedtime, I separately turn On “Main Siren” within the app. After about 30 seconds, the Offline icon for “Siren” turns to “Off”.

I then set up some rules for each of my sensors so that when a sensor is “triggered” it turns on the “Siren” Wyze plug, thus supplying power to the Very Loud siren from Amazon.

I also set up some rules so when “Siren” turns On, it turns on all of the lights in my house that have Wyze Switches, as well as, all of my outside Soffit lights.

Boy, does it work, as I accidentally left our front door bolt unlocked one night, and the door knob little bolt must not have been fully inserted. A huge gust of wind blew it open in the middle of the night.

We were awakened by the Wyze siren in our bedroom and the Amazon siren blaring with all of the lights in the house on.

The only issue is remembering to turn “Main Siren” on and off when I arm/disarm the Wyze HMS. I hope my interpretation of Dave’s Awesome idea is clear and helpful for anyone interested in this solution until Wyze gets its act together an at least links their HMS to their chime or comes up with another solution.

I can’t find a siren that turns on as soon as it’s given power. Everything I’ve seen has to be triggered. What siren did you get?

I can’t find a siren that turns on as soon as it’s given power.

I use this , wired to this , plugged into a Wyze Plug.