A warning about putting cameras in direct sunlight

A warning: Putting cameras in direct sunlight can make the camera go over temp and fail.

My experience was with a camera I painted Plasti Dip black and put in a west-facing garage window behind an uncoated plain piece of glass. It was summer. So there were several factors making the sun worse: The garage was hot, the camera was black, and sunlight was unfiltered coming through the glass.

THE CAMERA HIT A WHOPPING 170 DEGREES, and that was in late September in northern Indiana!!! Imagine what it might have been back in July & August, or in Arizona. The camera was down very often, often requiring power-cycling to get it back up again. I never would have guessed the camera would have gotten so hot there.

I moved the cam from sitting on the sill up against the glass to being mounted a few inches away at the top of the window, and cut the effect of heat down to around 100 degrees, worse case. The garage is warm in the summer, and the camera is always warmer than its environment. So I now attribute most of the camera’s temperature to that.

The camera is working perfectly now, but I wanted to warn everyone to think about your camera’s environment, especially if you are having trouble with it!

P.S – There are many ways to measure a temperature as hot as 170 degrees, but most simple liquid thermometers won’t cut it.

I happened to have a Bluetooth temperature sensor on hand, which could easily sit on top of the camera so it could see the camera’s temp, and not just the environment. It could measure the 170 degrees, but it was only rated for 140. So sometimes Bluetooth didn’t work @ 170, but the sensor still kept putting measurements in storage for later retrieval. The camera also waited until about 145 to fail.

So this is not a recommendation, just showing you the sensor I happened to have on hand to use: 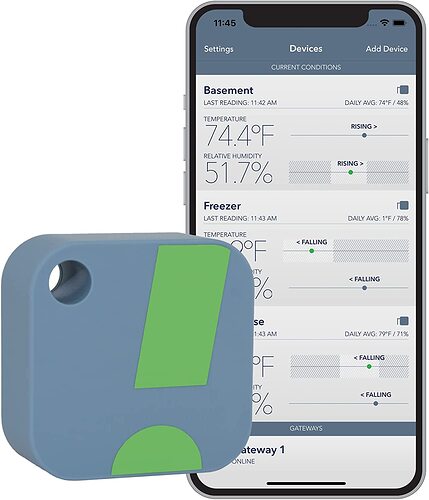 BTW, if you buy something like this, a temp sensor that can alert you if a temp gets out of range, then make sure your phone only reads the sensors on demand if you aren’t using the monitor feature. Polling all sensors every minute over Bluetooth can kill your phone battery quickly. On my iPhone, I do that by turning background app refresh off for this app, and only loading the app when I need to collect the temps.

The nice thing about this sensor it stores weeks of 1-minute apart measurements, so you can lazily find the hottest point of the day. It also works well within something, like a Humidor.

5 Likes
Cam Pan horizontal lines in low light or darkness
CamPlus does miss events, that is why an SD card is a necessity
ssummerlin October 12, 2019, 9:59pm #2

Cool
I use my handheld sensor.

I have a black one in a garage that gets quite warm, mounted mid-rafter level. It’s been operating without error for a few months (including SD event recording.)

It would be interesting to see what a white WYZE cam would register in similar set-up. I’ve always heard that BLACK objects get hotter than White. A quick google search revealed this:

“Black is the ultimate heat absorber. It absorbs all light on the visual spectrum, creating a void of light. As a result of absorbing all light wavelengths, black is the hottest possible color. White is the opposite. White light is the sum of all wavelengths, so when some people view a white object, they are really viewing all visible light hitting the object’s surface and reflecting back. Some heat is still absorbed based on the nature of the object’s material, but minimal additional heat is absorbed, making white the coolest possible color.”

I have two WHITE Wyze cameras in East and West facing windows … exposed to plenty of sunshine for close to a year … and have not noticed any problems. The cameras never go offline and reliably notify me of person detections in the daytime. (The IR’s are turned off, and I’m too cheap to add outside illuminators so the cameras see nothing at night because there is no ambient light outside.)

However, I’ve never taken the temperature of the cameras so I don’t have anything to compare to your whopping 170 degrees!

I am a bit worried about eventual burn-in damage from the direct sun … but, hey, I already have one additional WYZE cam in storage, ready for whenever anything might fails. Cheap insurance.

But then again, your sunshine could be different, depending on location.

Black is the ultimate heat absorber.

I learned that at a young age having a black car interior in the Florida sun. Ouch.

Never had a white Interior though.

Is the v2 OEM black (out of the sun) any cooler than white - on the idea that dark colors radiate heat more efficiently?

Haven’t scratched a black v2 to find out if the base plastic is black, but with a matte finish I’m guessing it’s painted.

The discussion and links here are interesting:

I have heard that Black Heat Sinks work better that non anodized or painted. Yet, I can't find conclusive evidence either way. I suspect that there has been a misunderstanding of black bodies being ideal sources of thermal radiation. I think that in reality, the ideal source property describes the lack of environmental interference when making measurements. The Anodize article does state that anodized aluminum has lower thermal conductivity than plain aluminum. Anodized aluminum would be prote...

Thanks for the post. I’ve had a V2 on my living room windowsill pointed through glass to the EAST for over a year now. The camera is covered with a black vinyl wrap to eliminate reflection. I hadn’t noticed any issues with the camera until recently (ref. attached photo). I’m now seeing a pinkish tint on the left and a greenish tint on the right. Not sure if the camera is permanently damaged, but I’m guessing it is. 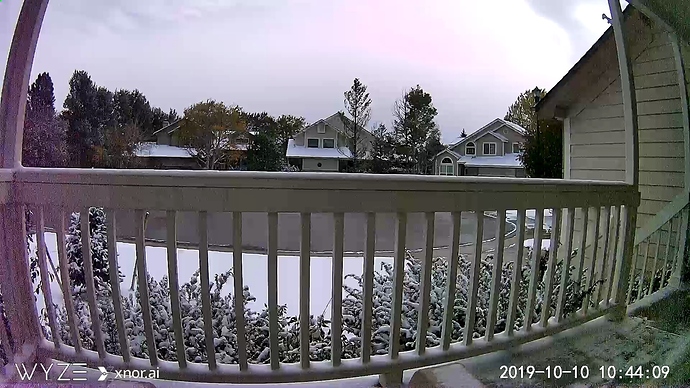 @Bam had this issue and he did a reset on the camera a couple of times and it fixed the pink issue. It’s worth a try anyway.

when mine turned pink I was able to fix mine with a couple of resets and haven’t had any issues since.

I consider the first picture to be a good mount for looking out a window. I used a 3M Command Strip to hold the metal plate to the molding, and removed the screen. Keeps the camera out of the sun. 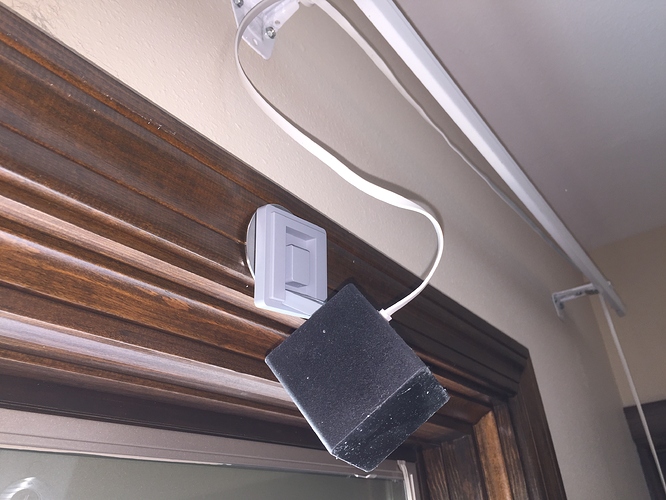 When it hit 170 degrees it was just sitting on the window sill, pressed up against the glass: 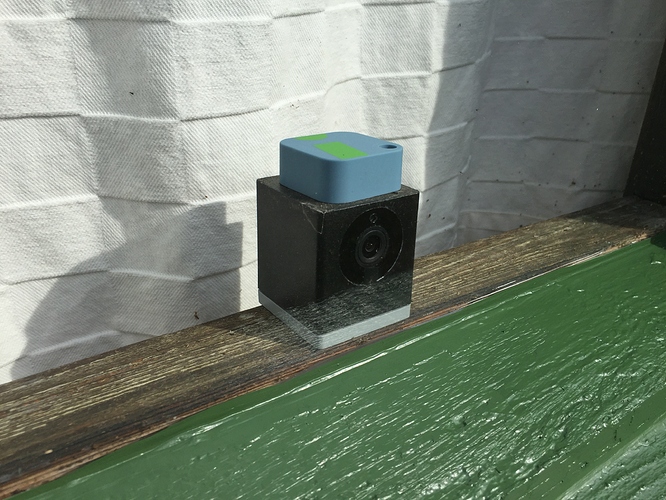 I moved it from another location where the black case was useful to hide the camera. I can easily peel the Plasti Dip coat off, but I decided to just mount it higher on the window. Thus, I didn’t measure how hot it would have gotten with a white case.

Mounting it outdoors in a breeze, or leaving it white, would definitely improve it’s ability to withstand the sun.

But if you have camera dropouts at a certain time of the day, consider your environment!

My first thought is to incorporate one of these.

That’s a good idea. Use a small fan plugged into a Wyze plug to operate during the hottest hours of the day. Maybe set a schedule to turn on around noon and off in the late evening. This would keep the cam from getting too hot if it were sitting in the window.

I have mine mounted over the garage and it gets full day sun. I have it encased in an all weather white case I got off of Amazon. This side of the house gets full sun 12 hours a day and when it rains, the rain hits the camera directly. So far I haven’t had any over heating or water issues. I also had one mounted on the side of the house getting all day sun. No heating or water issues with this one either. To give you an example of how hot the sun gets on that side in the summer, I used to power this camara off a black colored case solar power panel. I replaced the panel when it failed because the black plastic around the glass warped and melted allowing water to seep in. The camera was directly under it and it showed no signs of heat damage.

Well… i have mine mounted outside in all weather conditions… ps. Texas heat is unbeatable… and it never failed (hope i dont jinx it)

It survived countless floods and extreme heat days. If i could nominate it to get a medal of honor i would!!!

Moral to the story: if what you wish is a solar heater, paint it black.

I’m in Texas too and my camera location will be in full sun a good amount of the day. Did you put yours in a case? If so which ones? Thanks!

but you can find packs of 2 or more for the same price now! this listing is over 2 years old.

and yes full sun exposure during the whole day. i actually never moved it since i installed it there (august 2018) and its still functioning perfectly, which exceeded my expectations i actually bought an extra one just to be ready for it when it fails! well a year or so later i installed the spare one outside as well… now both cameras are outside with every single moment of direct sun light. to the point where i want them to fail or give up but they refuse over and over. by the way make sure you have good wifi connection outside and seal any holes you put in your wall with exterior window silicone, thats thick enough to keep the moisture out and prevent mold.

That’s fine if you have good airflow like outside, but I would caution against that if in a dead space area, like inside. My black cam was behind an unfiltered glass pane inside an elevated heat garage with no airflow.