I have 2 early version 2019 Cams. One I just moved into a garage and linked it to a WiFi extender in the closest bedroom. The garage cam connects fine and has decent video. In the afternoon the garage gets hot and the video from the cam becomes very distorted. I think some might call it pixelated. I have verified in the morning after the garage cools that the image is back to normal. Is the new version cam capable of working in 90ish degree heat? Any other suggestions are appreciated. Thanks, Robert

Can you provide screenshots of the distortions? And is this a v2 camera? If you move into the room with the extender does the distortion still occur? What lighting conditions are present when the distortion is seen?

This is from the Wyze shop for the black v2, but should apply here. 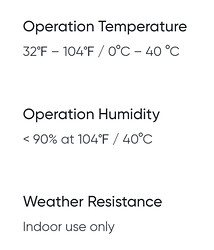 Some garages can get amazingly hot, are you sure you are only in the 90’s? The V3s should be capable of operating up to 113°F, and like Tony pointed out, the V2 to 104°F. The higher you go, the hotter it gets.

You might try rotating a second camera to that position to see how it does.

Let me tell you a story about a hot garage camera I had trouble with: It was a V2. I painted it black with Plasti-dip, and put it on a garage windowsill, behind a single-pane untreated window. It got the full brunt of the afternoon summer sun in an already hot garage, and would drop in and out of consciousness, including recordings to the SD card. I put a temperature probe on it and found it was hitting 170 DEGREES!

I moved the cam from sitting on the sill up against the glass to being mounted out of direct sunlight a few inches away at the top of the window, and cut the effect of heat down to around 100 degrees, worse case. Even though the V2 is rated for 104°F operation, it didn’t fail until about 145 degrees. So I was pretty proud of the tolerance it had. That camera still works today.

Not sure how to do a screenshot with an Android tablet… Lighting in the garage is low level and the camera is configured for “Night Vision” on. Not sure of version but was purchased in June 2019. With the lighting in the garage always the same (low level) image in the morning is very good. Once the afternoon sun shines on the garage the image is washed out (pixelated)

I had this same camera in the house connected to the extender and there were no issues. I recently moved to the garage to monitor the door status. I don’t think the garage reaches 104 deg. But probably near 90ish deg.

No idea what else I can add to this description. Thanks for the reply. Robert

You might try rotating a second camera to that position to see how it does.

For what it’s worth, I had a V2 camera in my attic for a couple weeks a few summers ago watching a rat trap. The video never changed quality. On the day that it was the hottest (outside air temp 117), I had a measured 151 F in the attic. At that point, it died. After it cooled down, it worked fine. Never did determine if it was the camera or the wall wart that failed.

With the lighting in the garage always the same (low level) image in the morning is very good. Once the afternoon sun shines on the garage the image is washed out (pixelated)

Any windows to the outside? If an light is getting through, this sounds like a exposure issue.

While watching live or playback, you can use the take photo button to save a shot of your current view.

What about the rat?

No longer with us…

Solution…The video went cuckoo again this afternoon. The video has been great all morning. I checked the garage temperature at failure time (97deg) so I swapped the cameras. The video went fuzzy again after about 30 min. I configured “night vision” to auto and increased the light level to keep the cam from going into night mode. All is well.

Thanks community, for keeping me WYZE!!!

I configured “night vision” to auto and increased the light level to keep the cam from going into night mode.

You can just turn night vision to “off” if you don’t want it to turn on. Did the fuzzyness occur when the ir lights came on or something?

I am still interested is seeing how this camera went “cuckoo” and “fuzzy”. Where you able to get the take a photo to work?