Yea, when I tried those actions in the past days is when my WSH would go all wonkie (well, wonkier), I stopped trying those actions until further notice

Curious as if your lights on the WSH were all blinking at the same time after failed attempts to add devices?

The lights were cycling left to right while attempting to add new or reset existing sensors. When attempt timed out, lights went back to all 3 solid on. Tried v1 and v2 contact and v2 motion sensors. Tried with hub connected via Ethernet and WiFi. Reset the hub twice and powercycled comm gear each time. Add/reset feature is kaput as well as everything related to chime/Tune.

I’ve been seeing the same. When the lights blink I want to try to fix something, and I get fixated on it.

My power is limited in this space, and so I had to have the left shoulder say, just stop

Why is it that Wyze releases such buggy beta code? Shouldn’t this be at least close to a final release product? It seems to me that most of the time they haven’t fixed the problems the beta firmware is intended to fix and frequently it adds new problems. Wyze seems to have a serious QA problem.

The main ones I am careful with are the hub firmware (which seems to more frequently have severe issues), since I only have one hub and it is fairly important and central to all my automations…and once in a while some hiccups with some of the camera firmware, though that’s usually not too bad most of the time, and I feel safe in being able to flash those devices back if necessary, so I usually test a few unimportant ones first and if successful then I do the rest, if not successful, I can just flash them back to production…but can’t do that for the hub, so while I only have 1 hub I am now a lot more careful with it ever since that one firmware early on where you and I and others had so many problems with the hub freezing up. Now I wait until reports indicate it is safe first.

I’ll probably get a second hub in the near future and take more risks with that one, but not with my main critical hub anymore. 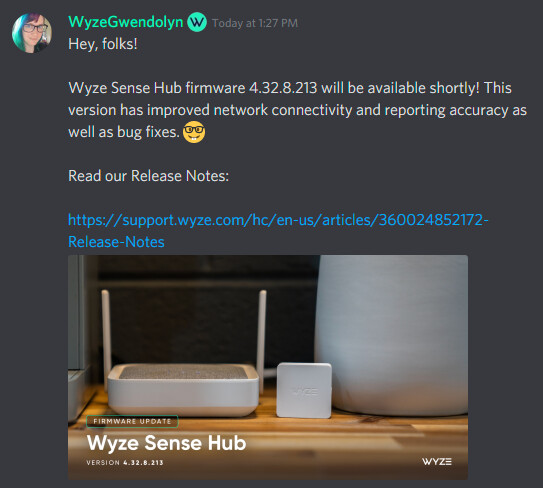 My issues have cleared. Must have been something server side. The only issue I still have is related to turning on or off the Tune settings. I cannot seem to change it, I am doing some additional testing and will submit a log later tonight.

That’s great to hear. I was worried we were about to have a bunch of really upset users over this firmware update since the firmware didn’t change at all before it went to production. Like you said, it must’ve been a server-side update to fix it. That’s a relief.

Interested to see how it goes for public adoption.

I am still having 2 issues with the Hub Sense FW udpate. Not sure if it is only with me but wanted to post it, I will also submit a log on this:

Having major issues now with the HMS setup. I decided to see if I can get by the Loading issue of the devices as I have a few devices to add. I unplugged the power got notified the hub was running on battery held the button until the light went out and plugged it back in, the lights cycled and became solid. still no luck. Now none of my sensors are working and no Rules are firing when triggered by a sensor on the hub. The hub keeps cycling. 3 lights solid and then starts rotating as if it need to be paired.

This is the cycling issue I am experiencing:

Here is another log showing the firmware issues are persisting with new people loading this same firmware now that it is pushed to production:

Hoping someone can find and fix the ongoing issues quickly.

Just got my Video Doorbell Pro installed today. It is wired and seems to function well. I believe this is a bug so I am reporting it, if I am incorrect, please let me know:

As indicated above, if this is the intended methodology, please let me know. Otherwise, I think it is a bug and should be corrected to make it more consistent with other camera’s.

I am fully using my VDB Pro and am liking it immensely. Appreciate the additions being done and provided. However, I have a couple of questions and potential bugs but would like your input as to if this is an issue:

As you may recall, I also have the VDB v1 and it worked as well. But I am finding the following:

Curious on what to expect and to gain an understanding as to why there is a difference.

I am also providing a log for you to review in the event it helps out:

However, now that I wired the VDB Pro up to the Transformer, it is always pulsating Blue

I think that indicates charging?

I would tend to agree. However, when I was testing in my office, I had a USB plugged into it and the battery would go down to 90% and then up to 100%, it was charging all the time and the Pulsating Blue Light only appeared when motion was detected.

My assumption, incorrectly, was that hooking it up to USB would be the same as hooking it up to the transformer. Instead, using USB still treated it as battery operated and there were subtle differences like the load time for live streaming. When connected to a transformer, it is almost instantaneous. When using USB or Battery it takes longer, similar to the WCO.

Here is what the icon shows when connected to Transformer:

This is what the icon looks like when connected to USB

Happens in both iOS and Android. Submitted Log from iOS as I seem to have been luck with submitting logs using it.

Description of Issue:
I caused an event to happen on my VDBPro this morning about 6:06 am Eastern Time. Later tonight I did a search and it indicated nothing was found even though there was an event.

I then changed my day to Saturday, the day I finally installed it and did a search. Results were provided for that day. Not sure why it is not finding the one event for today.

Supporting Images:
Here an image showing the event on today followed by the search for it and nothing found:

Wonder if it is because there is only one event for today.

So, hub firmware, plug firmware, switch firmware and the app all seem to be having problems right now. I believe I’ve also seen problems with robot vacuum, door bells and thermostats. The brouhaha over CamPlus and CamPlus Lite plus all the setting issues…

I think my statement about buggy products is fairly accurate right now.

I will agree that Wyze is experiencing some bug pains recently. I am wondering if it has to do with them changing things in the backend or how things are hosted. Sometimes after firmware updates, the reported bugs this year were resolved without changing the firmware again, which leads me to believe some of it may be back-end stuff. I do hope they can figure it out. I suppose my earlier statement was a lot more reflective of my overall experience in the previous 2 years. I had absolutely everything using beta firmware and rarely experienced serious issues. I am a little more cautious in 2022. I still install beta firmware on everything (except the hub now)…but I agree with your initial statement that Wyze should look into improving their QA procedures. One thing that should be discussed is more interaction in the beta threads by someone on the team for that product to ensure they’re aware of things that are reported (ie: the hub firmware bugs) before pushing it to production.

@R.Good asked me to check on something and I noticed it as well. Might be a little different but bottom line, I cannot scroll through all sensors on Android when accessing the Sense Hub v2. In addition, the Sensor Order is different in comparison to iOS.

Here is the info

iOS is another story, I can scroll through all 33 sensors without issue.

Per the Wyze Requested Information:

New Issue:
I have 35 devices attached to my Wyze Sense Hub used for Home Monitoring.

On Android Wyze App v2.29.0(114) On Android 12 (Pixel 6 and Galaxy Note 10+) I cannot see all of my sensors attached to the Wyze Sense hub I can only see the climate sensors and 1 Contact Sensor that I recently added.

Attempted a log out, cache clearing, and full data removal on the Android Wyze app before posting.