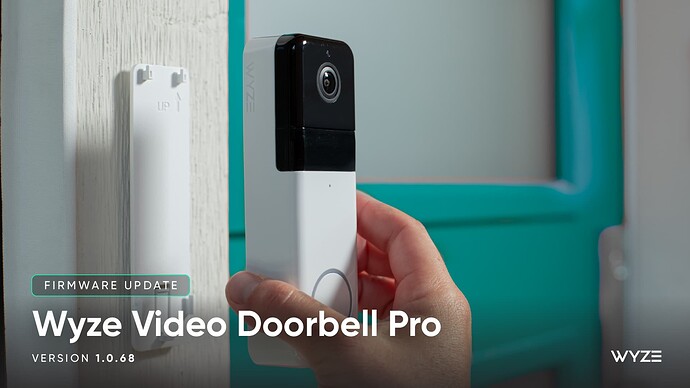 Did this break the Alexa integration for Person Detection?

Not that I am aware of, it definitely shouldn’t have.

I’m in the need of a doorbell , really thinking about going for the doorbell pro version

I will have to go with the battery version for the time being , would love if wyze would offer

It’s an attachable solar panel that charges the battery up for you , that way you don’t have to take the whole video doorbell down to charge it up. It also looks like the battery is not removable which was a bit of a weird decision

Would have been nice if wyze had a removable battery so we could buy an additional battery and when we replace one to charge , have one charged up so we don’t miss out on any events …

Jason, I confirm that the Video Doorbell Pro is not working as an Alexa trigger for routines. It seems like it is intended to work, since Alexa says this when trying to do a routine trigger for it: 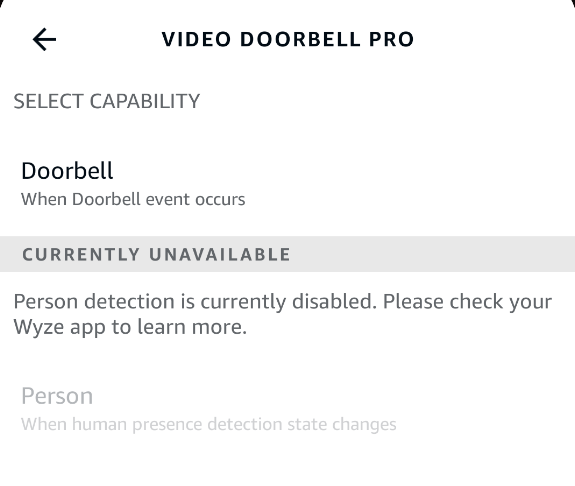 So it tells us we don’t have person detection enabled, even when we have Cam Plus on it with Person Detection enabled. So I am leaning toward this being a bug or Alexa wouldn’t even mention it as an option.

I’ll bookmark this to post it in Fix-it-first-Friday on the 5th if it still exists by then, but if you’d like, I could try to get you some kind of log, I just don’t know what log would help since it’s an Alexa integration issue.

I can provide a log too if one would be helpful.

@carverofchoice @laymanan
Did this just happen after today’s update to 1.0.68 or is this happening with other FW also?

I have never seen it working. It didn’t work for me when I first tried months ago, and I haven’t checked again before today, but laymanan told me it was working for him 3 days ago. Discussed in this thread:

Anyone else having an issue with the Wyze Video Doorbell Pro not working with Alexa’s “Person Detection Notifications”? I have Cam Plus on the Doorbell Pro and I’ve tried relinking the skill in Alexa to not avail. Doorbell Press notifications are available through Alexa but was hoping for more than that.

I was able to use it last week for about 3 days. (That was when I got my VDBPro).

So if it was working for him 3 days ago, it sounds like it might be something within the last 3 days.

But I am already on firmware 1.0.68 from beta testing it.

Looks like the capability is still showing as a valid option for other cameras I just checked.

I only noticed it after the firmware update, but I can only verify that it worked 3 days ago. Shows as an option from my other cameras as well and is able to be enabled.

I have reported it, I will update them that I currently cannot confirm if it is tied to this release or not until I have a few more reports.

It looks like the Alexa issue is a separate issue that we have been trying to solve for awhile now. It will work off and on at times and for some users. This is being looked into currently and I do apologize to those it is not working for.

@carverofchoice @laymanan
Can I have you both submit logs and let me know the log numbers.

Not that I am aware of.

OK, I just did a log for VDBPro - Subcategory “Other”

What is the Alexa integration for person detection?

It allows Alexa to announce if a person was detected using WYZE AI.