There are other threads discussing the doorbell problems. Here is one. There is a Wyze Team member there asking for logs. Suggest you drop logs and then reply back to Arthur over there with your update\FW details and log numbers:

Submit a log and write down the #. Go to this thread and scroll to the bottom. Then reply to Arthur from the Wyze Team with your FW version, log number, and a description of your situation.

Well. Don’t work on the damaged one. I have two doorbells, one was upgraded to 042. It then had the 3/3 problem. Then upgraded to 060, initially it was better. Now it is back to the same problem.

The other doorbell was not upgraded to .042 firmware. But now it is upgraded directly to .060. it works fine. No problem what so ever.

So chances are the the .042 update messed up something in the device storage that the .060 did not clear up.

I restarted the bad one several times. No help. I tried to avoid resetting the doorbell until this can be confirmed.

Oh man. Wyze. You messed up big. It’s been a month and we might have to wait another month for an update that might not work.

Same problem here, stuck on 3 of 3. This is happening on both of my Wyze Doorbells making them essentially unusable.

I have a Unifi network with 3 AP’s in an 1800 sq ft house so it’s not a signal strength issue.

This issue was reported and acknowledged on the latest iteration of Fix it Friday for action by Wyze. They are requesting logs. Suggest all affected follow the link to the Wyze post and supply the requested info in reply.

Hi, everybody! Let’s get ready for the Fix-It Friday follow-up! We have a fresh batch of issues to chase and we had some ties in some of our communities. Since our list was a bit low last week, we decided to take the tied entries in each case. Thank you for voting! Here’s what we’ve got for the month of May: Forum - Cannot select Wyze Cams when building Alexa Routines in the Alexa app

We’ve been able to reproduce this internally so you’re not alone! But we’re dependent on Alex…

This is a known issue and we’re working on it! Please send in logs using the following instructions and post the log numbers here if you’re experiencing this issue:

Account > Wyze Support > Submit a Log > Make sure you select your affected device and describe the issue in the description field. Giving the date, time, and time zone that you ran into the problem will help us locate the relevant area of the log more quickly!

[Mod Note]: Your request was moved to this category for better visibility. Your request is satisfied by existing functionality that may currently be inoperable.

We’ve been able to reproduce this internally so you’re not alone! But we’re dependent on Alexa to help with this troubleshooting because we don’t know if it’s a problem in the Alexa app or the device integration itself. We’ll let you know if we have any further questions as we work on this.

This functionality does exist. There are currently some issues going on with the interoperability of the Alexa App and the Wyze skill, so I am not sure if it affects this function. It may only be affecting routines. However, Wyze and Amazon are working on fixing it.

When it does work, you can enable the function by:

EDIT… In that page you can also set the Alexa devices that will announce the press and the sound you hear as well as person notifications if you want them.

Thank you for your reply. Sorry for not being clear. I was looking for an option for the Wyze Video door bell to send the video to Alexa when someone rings it

Ah yes… Something different. A function I do not use. But, there are some @Mavens who have the Video Alexa devices and the Video Doorbell. Perhaps they can provide some insight.

Here is the routine I built in Alexa.

When the front door bell is pressed, it’s just a voice command written (Add Action>Custom) in to the routine to call up the camera on the Alexa device or devices of choice.

I did the same thing as R.Good with my Video Doorbell. As he showed, you just do a custom command with Alexa and it acts as if you told Alexa that command verbally.

For a while I even set mine up so that it would automatically stream the video doorbell as soon as it detected a person, even if they didn’t press the doobell button (I had cam plus on it, but a person could even just have it automatically load the video even with just motion).

Well, for whatever reason my Wyze Doorbell (non-pro) is showing that I have the latest firmware version 4.25.1.042 but I know that the latest version is 4.25.1.060. How can I get this Updated? Any suggestions? I have tried to reboot the doorbell also no go. 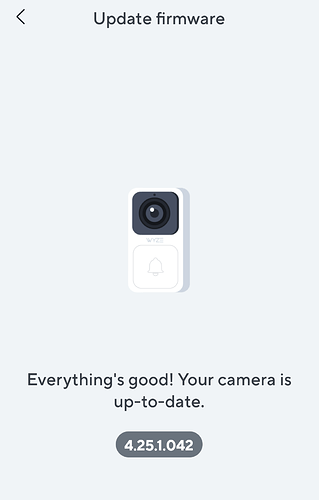 Don’t bother upgrading. I’ve been on 4.25.1.0.60 since it came out in beta. It’s still broken with the doorbell stuck authenticating 3/3.

So true @DHCR, same here, still bugging, stuck at 3/3. The doorbell is unusable

I have no answers for you. There aren’t any indications that the .060 was halted. I’m not going to update for the reasons stated by @DHCR and @adel_bouchiba although .042 was reported to have introduced the 3\3 problem and .060 was supposed to have fixed it.

For those affected with 3\3, it might be worth a try to roll the app back to see if it helps since there is no way to revert the FW.

Thank You all for responding, I like Wyze products but it seams that they are stretching tin with all those new product launches and forgetting to fix other older products by providing quality firmware fixes.
Cheers