Wyze Vacuum : trick for splitting rooms when you have interior walls

The room splitting feature for Wyze Vacuums fails for houses that have interior-only walls. Split lines can only be drawn between exterior walls. I’ve come up with a workaround for this deficiency. You’ll need some pieces of cardboard that are long enough to go from an interior wall to an exterior wall. The cardboard only needs to be tall enough to block the robot’s sensors. You’ll want one piece of cardboard for each interior wall.

Place a piece of cardboard between each interior wall and an exterior wall, preferably where you’d like two rooms to be separated. Then reset your map. Now perform a “quick map” - the robot will just drive around the middle of rooms without vacuuming. This means that it won’t bump into your pieces of cardboard, so you don’t have to worry about them getting knocked over during this process.

Once mapping is done, you can remove the cardboard. Now every wall in the house will be considered an exterior wall, and you’ll have no issues splitting rooms as you’d like.

The fact that even now you can still only split from exterior walls speaks to the lack of concern Wyze has for this product. When it first launched, I figured it was a feature they just hadn’t gotten to yet. But at this point, they clearly don’t think - or care - it’s something users actually need. Since when are rooms only defined by exterior walls? Why should the vacuum care? Also lacking - still - is the ability to clean a certain area. Just pick a spot, and tell the vacuum to clean it. My first, totally “dumb,” robot vacuum was capable of this simple task - you just put it down next to the area, and told it to start cleaning. I fully expect to read an article about Wyze going out of business any day now, as it seems like they are asleep at the switch.

Can you explain what you mean in terms of how I can fix this? I want to split my bedroom from my living room but am unable to do so. If I add a piece of cardboard, how will it be able to map out my bedroom? 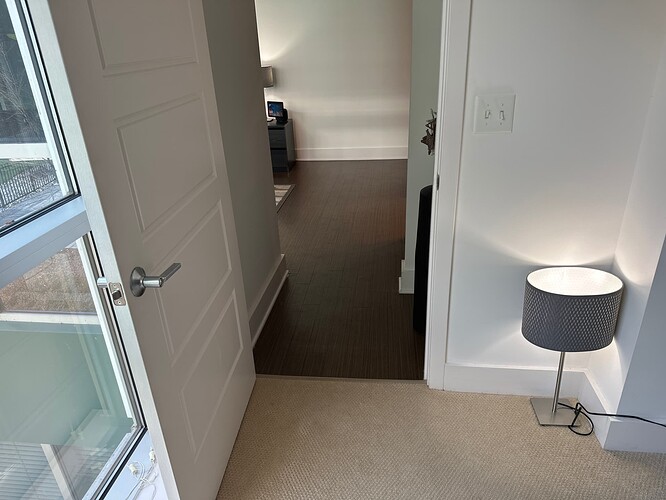 Can you share a screenshot of your floor layout from the Wyze app? 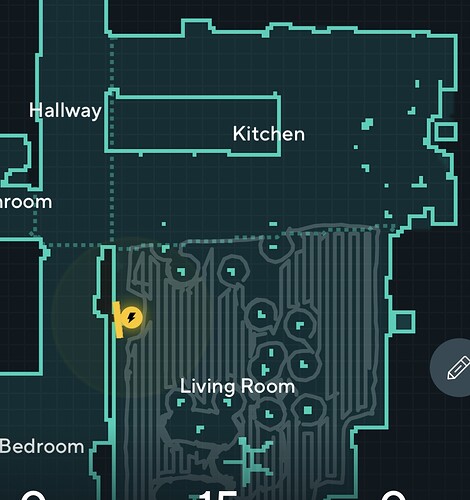 That big blob in my kitchen represents a support wall in my building, as well as cabinets and countertops.

@Chiff , you didn’t include a full picture, so I can’t tell for sure, but if the wall between the living room and bedroom is an exterior wall, then you can add a piece of cardboard as indicated in red, and that will extend the “exterior wall” to the kitchen support wall. Then you should be able to create your room division further into the section currently called “Kitchen”. 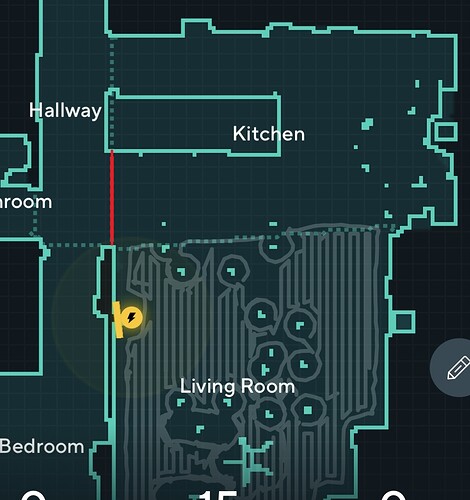 Thanks Garsh, I’ll have to give that a try sometime

Hi all, I’m not seeing this problem as you do! What are the versions You have?? above is mine.
regards, I do however use a screen pen to draw and move splitter lines.
By the way, it does help others if you cut and paste your info as you see mine. That way we know we are dealing with apples-to-apples…
Thanks,

@stargazeriinh, can you share a screenshot with your defined partitions? I’d like to confirm that you have indeed created partitions that end on an interior-only wall.

OK here is my screenshot! Please note your “Rev software is older”
To start: Red lines = New dividend or split rooms that are wall to wall making my Kitchen floor larger and splitting to what I needed.
Blue line= split of dining and kitchen
I have noticed that sometimes I have to first MERGE the two rooms before I make a split.
Example: I had to join The front door and hallway to split it otherwise it tells me that room is too small
Anyway, I hope this helps!
Do you see what I mean about using your information about Software Rev Levels?
Right off the bat, I see problems here!
Best regards, Capt. Rob 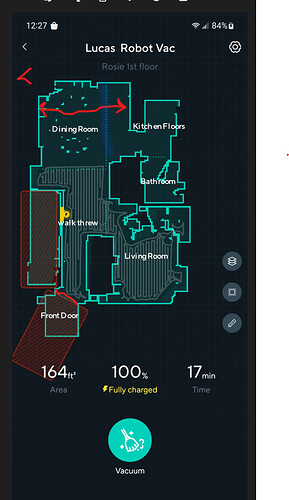 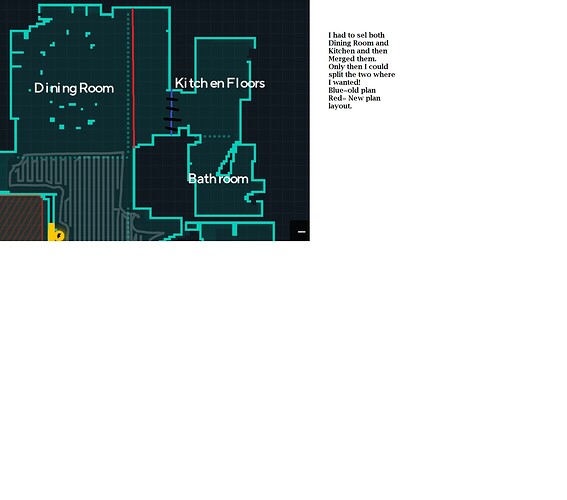 @stargazeriinh, the wall that the blue line ends on is connected to the outside. You can tell because that wall is filled in with the darker, outside color. The Wyze software is able to handle that with no problems.

If you take a look at @Chiff’s screenshot, you’ll notice that his interior walls are filled in with the interior color. Those are the types of walls that the Wyze software refused to end a split on.

And here’s my floor plan. The box where the “Room 3” label currently appears is an interior wall, as is the box below that. On the other hand, you can see that the wall between Room 1 and Room 4 is filled in with the exterior color, so Wyze can end splits along that wall with no problems. 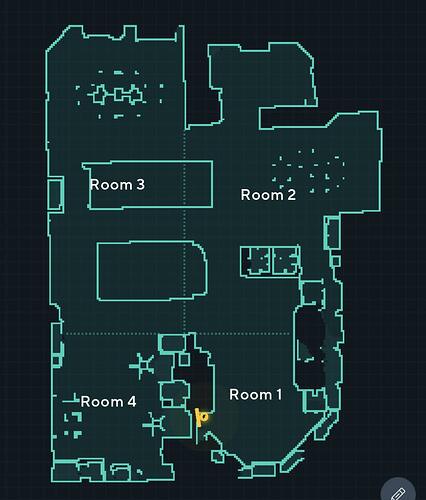 I see what you mean NOW!

I hear what you’re saying outside walls are solid Bright-Green and the dark green faded dashed ---- line is the current configuration made at the Robot’s first room scan.
My dining room “red arrow” was to the kitchen’s island and included down the hallway. so I wanted to break it up into smaller segments to do this I had to merge both the kitchen and dining room and then split the rooms to my needs including the hallway. Now at the front door area, I selected the “Walk-Threw” area then select “Front Door” then Merge. after merging and saving. I split making the 2 rooms I didn’t really need a NoGo but did it anyway.
On the split for the kitchen and dining area, I split from the wall to a china hutch!
In all cases for me, I find to merge first then split, merge split till I get what I need.
Hope this helps! 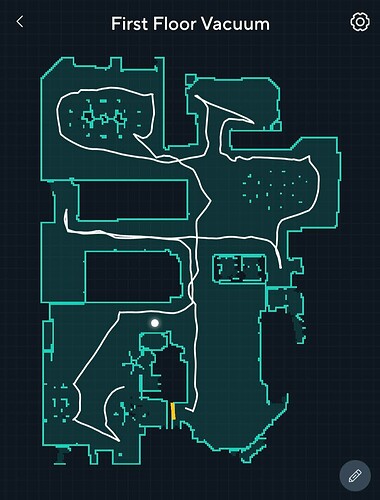 So now I can split & label my rooms in a more reasonable manner.

If you do something similar, the vacuum will refuse to cross those “cardboard walls” to go between rooms. Not a big deal, but it will take non-ideal routes between rooms at times because of this. Also, the app will eventually pop up a message about the floor layout changing. I can’t remember the exact message, but you should cancel the suggested action, otherwise it will wipe out your room customizations. 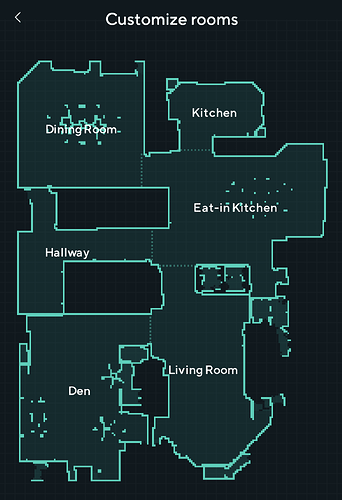 Thanks ! I would like you to try something out. Eat in the kitchen and dining room and Merge them. now to merge the diagram and now split them as shown in my diagram. Do #1 first and then save. now do #2 and save! Now to get your Eat in kitchen back reselect dining and eat-in kitchen merge and resplit line 2…etc. Try not to use your fingers but Rubber screen pen if you have one, I find this much easier to move lines.
Thanks! Capt. Rob 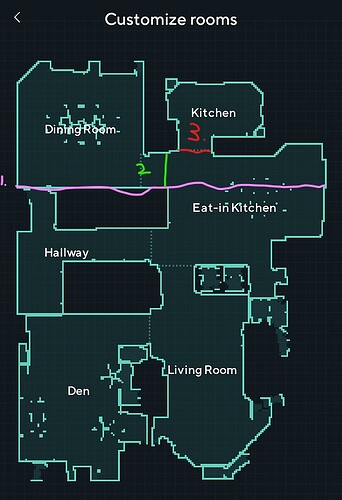 Done. Note that your line 1 ends at that interior wall - you can’t go all the way to the exterior along a wall.
I can only post one screenshot per post. So here’s the first step: merging. 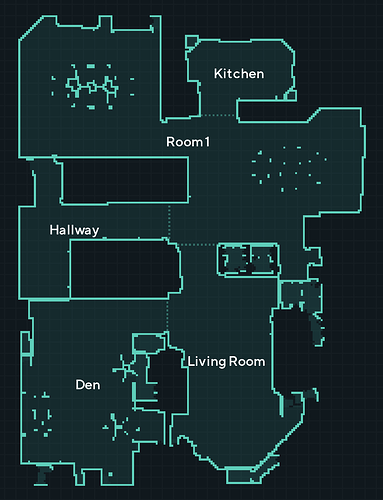 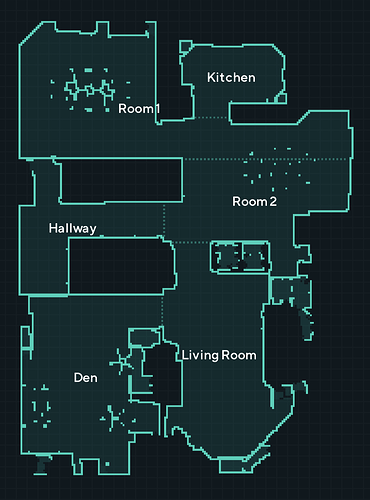 And here’s the second split: 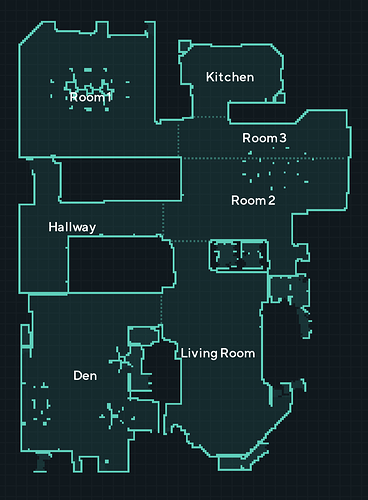