I know the Wyze team is working hard on the Vaccuum firmware, including the map editor feature. I have a request, or found a bug, that might be annoying for those who have open floor plans. My first floor is fairly open with open door ways and stairs in the middle of the room (Image Attached). Currently, the Wyze app will not let me draw lines across the doorways to create individual rooms (Image Attached), as it only allows me to draw lines to the exterior walls. Is this a known issue, or is their a fix?

Same issue with Wyze App v2.17.7.
Open floor plan, Can’t divide into sections. Can only connect to things on the outside path. Would be nice to be able to split a room and then split again using the in wall / split as an end point.

Yaaasss!! So I’m not the only one lol. I’ve message support a couple of times but they sort of ignore my question regarding this and keep suggesting remapping which doesn’t help. I think they just aren’t recognizing interior walls yet. 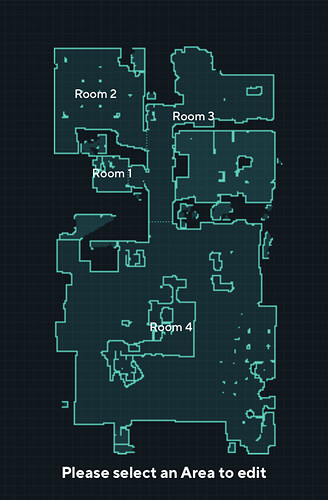 Yeah, this is happening with me also. Even after the new update which said it “Fixed a bug that prevented Wyze Robot Vaccum users from dividing rooms” the lines still go through my interior walls.

This is a well known issue. I haven’t heard of any fix at the moment. Currently it will only let you clip to the walls and it appears only the walls supporting the frame of the house. I have a wall in my living room that splits between the hallways and it doesn’t accept that as an anchor wall.

Same problem, Hopefully they update the maps to allow you to split rooms and attach to interior walls. Otherwise map editing is pretty useless.

Agree with all previous. I would also like to see an option to add a diagonal virtual wall. Currently, you can only make horizontal or vertical walls, but I’m sure many folks occasionally need a diagonal one. Alternately, let us rotate the map before placing a new virtual wall.

I had sent this request originally to Wyze Support, and their answer (after over 3 weeks) was to post such “feature requests” on the forum, so here I am . . .

I too agree with the previous comments. The ability to map to interior walls is a requirement for all of us with open floor plan… Otherwise each clean has to be of the whole house.
I have 2 vacuums one for upstairs and one for downstairs. Upstairs I have no complaints, the vacuum exceeds expectations; each room is labeled and I can clean any room at any given point. Downstairs (where I have an open floor plan) I have the issues mentioned in each of the above comments.

+1… very frustrating…
Have to free form map at will.

Came here to post the same thing after running my vacuum for the first time.

My issue is like the first picture in this thread where the map gets rotated and mixed with the original app and then my robot thinks he’s cleaning the neighbors back yard.

I haven’t had a full cleaning cycle in months.

Have you updated firmware and remapped?

I’ve done this and the problem persisted. It ran without error for maybe 4-5 times and then the map got corrupted again. It’s better than before for sure but the issue still persists.

When this is happening, have you checked to see what your WiFi signal was? I had this issue and found that it was related to my network and the Mesh Node it was connected to. I have not had an issue since correcting this and also loading the latest Firmware. I was lucky and got Firmware 1.6.130 which may have also played a part in correcting my issues