I’ve done a ton of troubleshooting and can’t figure this out.

My AC’s contactor isn’t getting 24 volts in from the control board.

Everything else is fine. When I set the system to cool, the blower turns on. 24 volts are coming from the transformer. But not leaving the board to the outside unit.

It seems like the problem is that power isn’t being drawn through the c-wire adapter. Though I’ve tried checking all the connections.

Any advice would be welcome.

Only one. Pic attached. 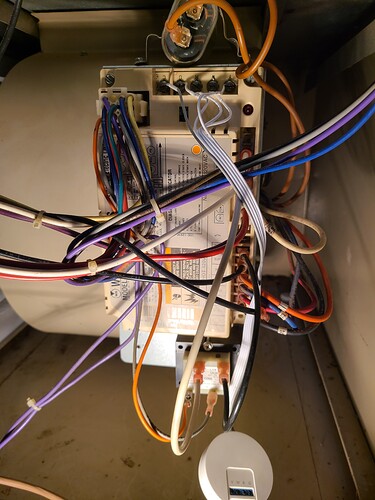 Unless your system works differently, I would expect to see two wires coming from the Y and C terminals on the air handler that go out to the A/C unit’s contactor. I don’t see those here, which would explain why the contactor doesn’t get power. Would you happen to have a pic of the air handler terminals before you added the C-adapter?