Wyze Sense Hub firmware 4.32.5.92 is releasing today! This important update fixes a bug that caused some hubs to turn off immediately after the hub is unplugged from power. 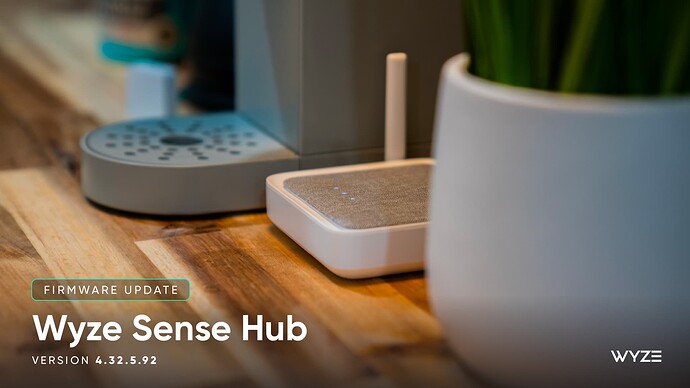 Wyze Sense Hub firmware 4.32.5.92 is releasing today! This important update fixes a bug that caused some hubs to turn off immediately after the hub is unplugged from power.

@WyzeGwendolyn , I’ve always thought that you are fantastic and I remain a pretty loyal customer / fan of Wyze.

DISCLAIMER: I haven’t any experience yet with wyze sense v2 and might be COMPLETELY OBLIVIOUS about any redundant power provisioning to the hub, but aren’t most electronic devices considered off when unplugged from utility power?

Consider this your morning laff if I’m totally clueless here…

Roger that. Is it possible to remove/disable that internal battery? I usually don’t like independent batteries fighting my power cycle efforts… since you guessed correctly that I run all of this off UPS already

Typically, I also defeat batteries in cable modems and other such devices since I actually WANT them to go dark when power cycling. Glad to have the info though. I didn’t really see much mention about the hub itself since it only seems to be listed as component of the home monitoring service. Might’ve missed it, but didn’t see a place that had expanded details as do many other products.

You are just a wealth of news & info, hound…

The internal 18650-2600MAh battery is wired in, but it can be unplugged if you open the case. It also backs up the local alarm in the Hub, arming countdown, etc.

Is there any sort of administrative interface where it can be disabled without physical tampering? How 'bout a hardware reset button that briefly opens the battery circuit to cold bounce the device?

No, they really want the battery to stay in circuit.

There is a reset button. It may interrupt the power, but it also erases everything the Hub knew. So if you press that, you have to re-add the hub and all it’s sensor connections.

I’d be surprised if config/endpoint data wasn’t strored in NVRAM. But these are different times…

Since this would also describe a total battery discharge, I find it hard to believe there wouldn’t be a contingency. However, if utility power is down, Internet will likely be down in the region as well. What I’m getting at here is survivability. Hub devices like these should be configured to resume operation once services are restored.

We are making a lot of assumptions here without really knowing much about what we are discussing.

I did find someone who removed the battery and reported it lost all its settings when the power failed. I also found someone else who said they totally discharged the battery, and the settings remained. I know nothing about the internal hardware implementation of the Hub, but just based on those two observations it is possible when the battery gets to a certain level the firmware shuts the Hub down, and only powers what it has to to keep the settings alive (maybe a RAM chip).

So without further testing or a path to the program manager, I can’t really say for certain. Might be interesting to unplug one for a day, then 2, then 3, and see what happens. I can’t do that to my Hub tho, as it is in use.

P.S. – My Internet does not drop when neighborhood power drops. I do not know why that happens; the cable company may power the network with UPS units, or they may get power from another grid. But in 3 or so years of running a UPS on my modem and router I have yet to lose Internet during the 3 hours or so my small UPS can keep my equipment up.

When I opened it and unplugged the battery then plugged it back in after a bit , I had to re add the hub back
When I had a power outage for 11 hours the hub came back online no problem