So one of my Wyze Sense door contact sensors stopped working. I thought it might be a simple battery change. Nope! Tried replacing the battery and the sensor is completely dead. Tried a chat support with Wyze. Went through all their hoops and hurdles. The guy kept asking me how many times the light on the sensor was blinking. I told him several times it was not blinking at all!
He then asked me for my order number. Hell, I dunno! I’ve ordered several things from Wyze and all of my email order confirmations never say what the product was that the order number is associated with!
Then they ended my chat session abruptly. Tried starting another chat session and that one got cut off too. Granted I didn’t spend a ton of money on this thing, but I kind of feel Wyze is just taking peoples money and not standing by their products. I’m pretty ticked off!

There are probably numerous threads dedicated to this already, but wyze has issued a statement about this saying if the battery dies then it could permanently disable the sensors… I’m not saying that’s what happened to you, just that it is a problem.

How long does the sensor's battery last?

I also have a few contact sensors that do not work properly. Even though they connect and turn on, they say offline 99% of the time! Just cheap toys basically.

Psh, great product design. If the battery dies…your product dies…even if you replace the battery

Apple was/ is the master of planned obsolescence. They did it in a way that drove new product sales and always provided exceptional customer support. This is something else… poor planning, low quality products, etc.

Yeah, it sucks (that the sensors can brick if the battery gets low). Wyze actually didn’t do this intentionally. It is a problem with the Texas Instruments chip that was used by the supplier. Basically, if the voltage hits 1.78V it sends the chip into a lock state. 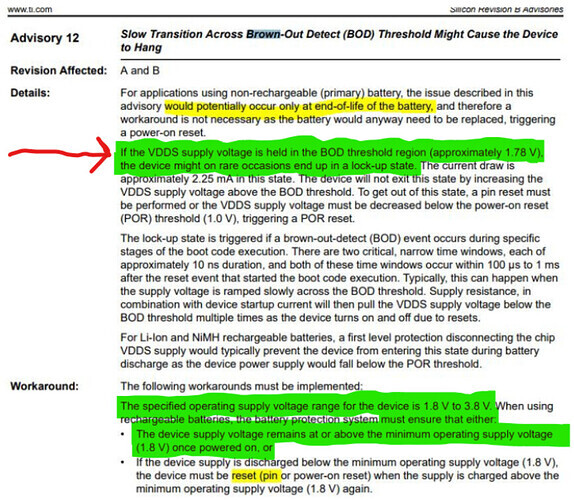 So an actual “DEAD BATTERY” or no battery doesn’t hurt the sensor, it is locked up technically just before the battery fully dies. The sensor is not actually completely ruined, but it is very complicated to restore back to usefulness, There are threads where people outline in detail how to restore the sensors…but most people won’t be able to do it, so they’re effectively ruined for most who aren’t electronically inclined.

Wyze tried to help by creating a low battery push notification, but their latest update to the sensor GUI seems to have disabled all the low battery notifications. Plus, those notifications have never worked if you put the sensor in a group. The only way to tell lately is to notice the multiple red flashes just before it dies. Or sometimes if you catch it right when it stops working (Seemingly “dead”), but before it gets down to 1.78V being sent out to lock up the device.

Again, “no battery” in there is fine and won’t brick it, and 1.8V-3.8V is fine…it’s just the 1.78V just before a dead battery = brown-out-detect lock state that must be manually unlocked and reset the MAC address back to the one listed on the device, then it will work on Wyze again.

Very in depth and thoughtful response! No joke. Thanks for explaining that so eloquently.

But it still basically means the same thing: poor planning, product design, implementation, strategy, etc… I was ready to go all in with wyze, and kind of did. 300 bucks and one month later and I am throwing in the towel. I have already spent more time troubleshooting their sensors and one of my new V3 cameras then I have the entire last year on my Cheapo yi setup… I will try them again if they make it through these latest Growing Pains.