Does anyone know how to clean the mapping sensors? The robot seems to be getting lost and confused and thinks it’s in a different part of the house than where it actually is. It’s going through virtual walls, etc. when it thinks it’s somewhere else.

I’m having a very similar issue. I’ve cleaned the sensors that I know of, changed virtual walls in my house, etc… and it constantly gets lost. Maybe its the LiDAR sensor becoming confused because of some surface/reflection on the floor/wall? It seems to do it more often when its going over uneven surfaces from what I can tell. At this point, I don’t see lots of similar issues with this and I’m wondering if the unit is faulty.

Same here. When it moves from tile to carpet something weird happens to the vacuum and gets lost. It starts mapping weird parts of the room.

You can see on the right hand top side of the house. The vacuum has started to remap that part from a different perspective causing wall overlaps and it not being able to figure out where it is. Don’t know what to do about it.

Yeah its a very frustrating issue. Mine is considerably getting worse and now I’m lucky if it even finishes the initial parameter scan before loosing its place on the map. I haven’t been able to complete a single room cleaning cycle in over 4-5 days now. It loses itself so many times now on the map, I eventually just get frustrated and send it back to the dock. I hope they find a solution for this soon.

Same issue here. The vacuum starts, and immediately changed the marked location of the charging station to a random spot on the map. It then proceeds to search for the area I’ve asked it to clean, but spends about 20 minutes wandering through the house with the map showing it thinks it’s in a different area than it actually is. It then gives up, saying “cleaning complete” and then tries to return to the charger but can’t. I haven’t been able to successfully clean an area in 3 days. Wyze needs to fix this.

And this happened only on the carpet because the door stop was too low and near the floor carpet compared to on tile. This caused it to escape the eyes of the lidar.
Image of doorstop: 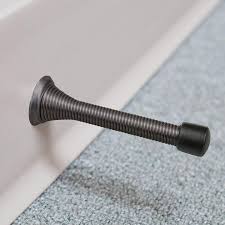 Today, just simply checking my map, the dock decided to magically move itself from the living room, to the external master bedroom wall lol. Wha…? No clue.

I’ve had issues with the transition from hardwood to rug/carpet and the vacuum gets all sorts of confused after. If attempting to clean a straight line and one wheel is up on the rug and the other on the hardwood, it almost always gets confused. I’ve also had it just simply go nuts by vacuuming in the middle of a rug or hardwood. My attempts to troubleshoot the vacuum so far have been mostly unsuccessful because the problems are so intermittent for me, at least.

My next step today will be to completely remap my house and see what happens. I feel like this may help for at least a short term solution but time will tell. I’m really hoping there is another update SOON that may address more of these issues.

Same issue here. The vacuum was working fine for a couple of weeks then all of a sudden, the charger on the map has moved into a closet and the vacuum can’t move. I remapped the house and the very next day, the charger is in a completely different spot of the house. What’s going on to make the charger move around on the map?

At least for a workaround until they resolve the root of the problem, let us move the charger while editing the map?

This happens with me, seemingly every-time it stops because of objects. It completely loses track of where it exists on the map when I restart it. The map shows it in completely incorrect areas or drawing brand new maps. I usually have to stop it, grab it, put it back on the charger, if it shows it’s on the charger I’ll run it again and that sometimes fixes it.

It’s weird, I didn’t really have that issue when I first got it. When it had to stop I’d just restart and it would be fine. I thought at first it was an issue where the longer the vacuum waits the more likely it is to losing stuff but this last one only sat around for a few minutes before I fixed it and it still went nuts.

Not that I have a solution to this yet myself… but I’m having the same problem. I’ve had the vac for about 3 weeks now, and it’s completely lost its mind 4 times already. It does seem like it’s related to an object being where it doesn’t belong (like a throw rug that got caught, or a chair that was in a slightly different location, etc…) - but really Wyze, the walls don’t move. The robot still knows where the walls are, and it should be able to back itself out and reorient itself. Like some others in here, the map now shows the charger on the other side of the house. I will run a mapping routine again and see how long it lasts this time. In the meantime, it would be very nice if Wyze could address this.