Wyze over the door security camera

Hello!
I feel as though there is a niche market for people who want a security camera that is not a doorbell camera. Either they do not have a doorbell such as consumers in apartment complexes, or they may not have a doorbell that is compatible with wired options, or customers who are worried the camera will be removed, or even customers that wish to have a camera on an unattached garage/shed. I wish Wyze could work on a camera that installs over the door frame. It would of course need to be weatherproof at least on the part that is exposed to the elements. Similar to a towel rack that hangs over a door, the camera itself would be positioned outside at the top of the door while the battery and hardware needed for it to function wirelessly would be indoors. This would help tremendously for those of us who want the functionality of an outdoor camera without the fear of it being removed or tampered with while giving ease of access to the battery compartment and sd card slot.
Thank you for your consideration,
Zach

@IZACH4g Welcome to the community! Good idea! Don’t forget to add your VOTE.

I think Wyze could make an affordable over-the-door cam. The Remo Doorcam is $199 on Amazon. 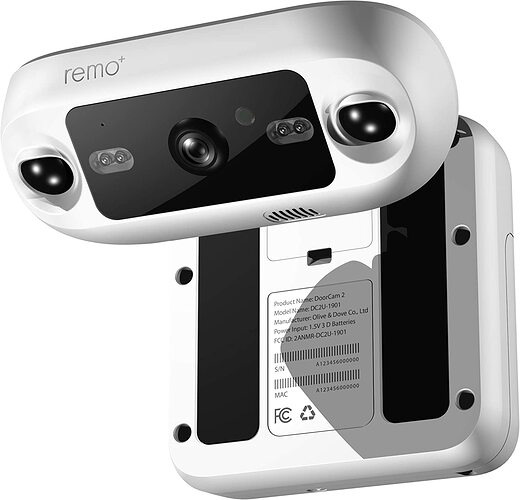 DoorCam 2 is the second generation of the world’s only over-the-door wireless Wi-Fi camera. It installs in seconds over most doors so that you can monitor all activity in full HD. You can also see, hear, and talk to visitors from wherever you are...

Voted. Seems like a good idea to me. It shouldn’t take much at all to do a hanging version of a battery powered camera (but hopefully not as bad as the WCO).

My downstairs neighbor has one and I always thought it was an interesting idea. I just want it to play nicely with my other Wyze products!

You know, lots of people are powering V2s and 3s with battery packs. Stringing one over a door - maybe use a wreath hook or just a wire hanger - should be simple. Not to mention, running USB power along the door jamb.

My only concern would be that someone would remove the camera without it being anchored. I also think it would not be helpful for those who use even the outdoor camera since anchoring it required a screw in the wall and some landlords may not be approving of it. It would be easy to just unplug the micro USB cable and just run off with a free camera and SD card.

MOD EDIT: Please add Battery option to the next release of the Video Doorbell, and if possible, add an optional battery pack for the current release. Thanks for all your great work!!!

I would say that depends a lot on if they make it a simple doorbell, or if they build in peep hole mounting. If they make it the same as the current doorbell, just with a battery, then they leave all the apartment dwellers like me out in the cold again. In this case I would say the over the door cam is detrimental to many of us staying in this eco system.

Even without my specific use case, I could see an over the door cam market. Many people have sheds or out buildings, ect. that would benefit greatly from something like this…even past that think if they made it connect directly to the app, now you could bring this with you on trips and hang it over hotel doors.

Either way, it got my vote and I believe it should stand alone.

Whatever decision is made I would like to thank @cheaplikeafox for asking what everyone thought vs just eliminating something they personally thought was close enough and telling you that is the way it is…this, unfortunately, has been my experience so far.

I fully agree with you here! Having the freedom to move the camera and take it with you on trips would be very helpful. I am also in your shoes to where I cannot mount anything outside of my apartment and I do not have an existing doorbell to replace. I also would not be comfortable just 3M stripping a video doorbell to the exterior of my door as I would constantly worry that someone would just steal it.

My daughter in same situation. Landlord will not allow anything screwed onto any part of door or door frame. If she attached one to the frame, I believe he would pulled it down thinking it was secured by screws. I reseached and found that a company makes a doorbell video (ring) that sits in a metal housing and is placed over the inside edge of the door, Using bolts to apply pressure to the metal frame so that it does not slide down. Over course you have to remove the whole unit to change the battery every other day or so (depends on amount of traffic moving in front of the doorbell that depletes battery usage). Hoping Wyze improves on this concept, and makes a battery operated doorbellwith battery seated inside the door, easy access and not needing to remove whole unit to change the battery.