Why would anyone get one over the other? I’m confused why they are selling both of these.

They made a comparison listed on the product page: 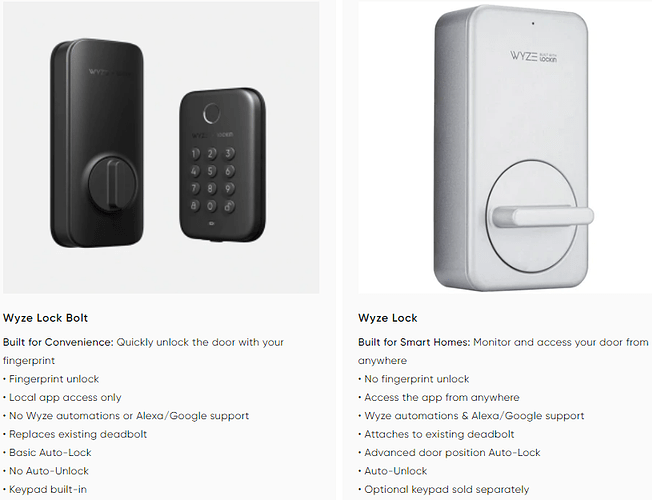 There’s also a FAQ page dedicated to the differences (basically the same as above):

What's the difference between Wyze Lock Bolt and Wyze Lock?

Both of them have keypads that can be used with them though, so I wouldn’t call them lock or lock with keypad since both can be described that way. This first one is called the Wyze Lock (recommend using “v1” after it to distinguish this), and the second one is called “Wyze Lock Bolt.”

Hope the above comparisons/FAQ help answer the question.

Okay so why keep selling them both?

For example, one of the main differences is that some people want their devices to have internet connectivity with remote access (ie: if you forget to lock your door, you can lock it from anywhere; if you’re renting it out to people or running an Airbnb from far away then you can change the codes anytime and any other number of things), you can get notifications, such as that someone left the door open, or when someone unlocks it, or if it’s ajar or any number of things you setup. You can create automations, and control it with Google or Alexa, have things announced when someone unlocks it, or opens it or if it gets left open for a certain amount of time. The possibilities are NUMEROUS. All of those things are only possible with the original Lock V1

In Contrast, some people adamantly absolutely DO NOT want their locks to have any kind of internet access. They are afraid it makes it less secure and many other reasons. This is the point of the Lock Bolt.

Just those 2 alone are enough reason to keep selling both of them. But there are many more.

Some people DO NOT want a key at all because then it is too easy for someone to break in with basic lockpicking tools in a matter of seconds, or other concerns as well.

We could go through all the differences, but in the end they are pretty different options for different preferences, and a good reason to keep selling both of them.

I have both of them myself, and like them both for different purposes. I have recommended each of them to different family members of mine who have different preferences.

I hope Wyze continues to sell them both for now since they suit different needs.

In the future I’d like them to create a version of the lock bolt that has open/closed sensors like the Lock V1, and has the option to buy an internet gateway for it. That way people could choose whether to have it local only or gain the online benefits, and we can have all the other sensors that make the V1 Lock amazing too. But even then we’d still have the problem of those who desperately want a key and those who absolutely don’t want a key. We’ll have to see what the future holds.

Because one of them works really well and the other is new shiny and pretty.

In all honesty, the Wyze lock with a keypad is what i think of when i think of a smart lock. you can control the lock from anywhere in the world. I recently moved into a new house that had zwave locks which i didn’t like because there was no app to open the door remotely.

Knowing how great the Wyze lock with keypad was I ordered the new locks and found that I’m in the same boat, still no way to unlock from the app, unless I’m standing in front of the door in which case using the app is probably the least efficient method of entry.

I will be returning the new locks and going with a different brand. I like the features of the original wyze lock, but lets be honest, it’s pretty ugly.

Seems like you’d want to be able to control it from anywhere and if you don’t want that then just have a toggle to turn that feature off.

Don’t get either one. I have the Wyze lock and it sucks. Burns through batteries in less than a week and that’s with little use of the door.

I have a friend that has one and he hasn’t had battery issues. I wonder if you just have a lemon?

I have several locks and my lock batteries last for months and I use them A LOT. I would definitely have it looked into (submit a log, open a support ticket, check over the settings, maybe set it up from scratch to see if that resolves it).

No rechargeable batteries hold enough mAh’s to last a long time before they need charging. So if using them devices that get used often, it’s better to find the highest mAh rechargeables you can find. Even with this drawback I’d still use them because they’re more cost effective.

Yes, as you said, I also prefer Rechargeable batteries even if I have to replace them a lot more often. I was mostly pointing out that rechargeable batteries do require replacement much more frequently I am currently using rechargeables in one of my Wyze locks, and the lock certainly reports the battery is fairly low because the mAh is so low in them, but I’m okay with it because I’d rather replace them more often in that door (it’s not my primary door) than use extra money to have long-lasting batteries when it’s not necessary for that particular device.

Some people DO NOT want a key at all because then it is too easy for someone to break in with basic lockpicking tools in a matter of seconds, or other concerns as well.

It’s also worth noting a burglar is more likely to break your window than to try and pick your lock.

In my experience, it depends. I have actually met some [reformed] burglars and had long conversations with them about lots of these things. The problem with breaking a window is that it is a lot more suspicious to observers or alerts people nearby or even in the house, etc. It makes everything really obvious like blasting a siren to all the neighbors.

For the most part, statistically, the overwhelming majority of burglaries are perpetrated by someone who knows someone in the household (family, friend of someone in there, neighbor, etc), and usually during the daytime while everyone is at work/school. Often they’ve been there before.

Other than that, is also common for burglars (especially the more rare stranger burglars) to knock first and make sure nobody is home, if there is a response, they’ll pretend to be there for some other ostensible reason they make up. If there is no response, they will often check if the door is just unlocked and try to open the door (frequently they get in because someone leaves a door unlocked). After that, if they have a picking set, then they can often pick the lock unsuspiciously in less than a few seconds. Look at this example from thenetguy opening a deadbolt with a keyhole in just a couple of seconds:

There is no need to break windows when it’s easier and less suspicious to use the door. That is the least suspicious and preferred way to get in when it is easy. Their body can be used to block onlookers from seeing that they actually picked the lock, and people will generally assume they were let in if they did notice. If those aren’t options, a lot of them would rather move on to another house that is likely to be easier pickings (again, unless they picked the house because they know the homeowner and are going for them specifically).

Others who still want to be careful will go somewhere without a lot of light or viewing angles and CUT through a window…but that’s more of a nighttime thing.

But it is accurate that a desperate inexperienced and currently high or withdrawing druggy is more likely to sneak into the back yard and smash and grab and hurry and run…but those guys get caught easy, have little to no experience and broken glass is basically like a siren alert for nosey neighbors, the majority of burglars never break a window unless they’re an amateur or fixated on a particular house because they know the person there.

Anyway, no keys is just my preference. My house doesn’t have to be impossible to break into, it just has to be not worth the time, effort and risk for the potential payout. Not having a keyhole for easy 2-second unlocking is something I personally prefer, but I totally acknowledge that some people want the reassurance and convenience of having a key for backup. The original locks totally make that possible to fit those needs too.

It only takes one kick to break open most front doors. And most windows can be opened without breaking. The most you can do is slow down a break in.

I am currently using rechargeables in one of my Wyze locks,

Carver,
What Brand of rechargeables are you using, and how often do you have to replace them?

I’m considering these, but due to cost, want to verify this brand is working for someone in the Wyze Lock.

I have not tried that brand specifically, but I am sure they are fine. I use 2800mAh rechargeables from a brand called EBL off Amazon…mostly because they had some of the highest mAh at the most affordable cost I could find.

I will mention/warn again that the biggest downside of using rechargeables in the door lock is that the battery percentage STARTS at a drastically low number like 5%, so it will give you the low battery notification basically immediately. Just be aware of that. In fact, I am considering switching back to using Duracell batteries in my lock again when the rechargeables die again. We’ll see.

I use the Energizer rechargeable batteries simply because I use double A’s and triple A’s and it’s a very convenient product and what I found is if I take a regular alkaline and plug it in with three of the rechargeables to calibrate it then if I swap in rechargeable real quick it works fine for the full length of the recharge. I just keep a alkaline handy in the hall tree for my monthly reschedule charge.

If I were to use rechargeable I’ll only use Eneloop, The capacity is lower but self discharge is much lower, so I bet in the long run they’ll last longer.