Currently the Wyze Skills in the Alexa app only allows for locking the lock using Alexa voice. Alexa will allow to unlock by voice but as added security you have to give a 4 digit confirmation code. Wyze didn’t want the unlock feature as they saw it as a risk. But with Alexa only allowing unlock by voice with a 4 digit code, I believe this mitigates that risk exponentially. Please allow the unlock feature in the Alexa app.

I just tried it and it worked for me. You have to put in a four digit code and when you ask her to unlock the door she’ll ask you for the four digit code if it matches she unlocks the door.

Voice unlock works for me using a 4 digit pin code also, but I do use the beta app so I’m not sure if it’s live in the regular release app yet. I can actually use my voice on my Apple Watch also to lock/unlock through an app called Voice in a Can which adds Alexa to the Apple Watch…Pretty cool stuff. All smart locks that I’ve ever seen require a code to voice unlock with Alexa to prevent someone from yelling in the window to unlock the door.

Oh wow, I just tried it and now it works. It wasn’t working for me and I submitted a ticket to Wyze about it. They wrote me back and said “We take security very seriously so we decided not to have the option to unlock with Alexa as a feature.” I then wrote them back and said how Alexa had the 4 digit confirmation code so it should be safe. They then told me they would discuss at the HQ but in the meantime they wanted me to submit this on the wishlist. So I guess they decided to include the unlock feature now. I am using the standard Wyze app.

I’ve been thinking about getting a Wyze lock, but if it does not have the ability for Alexa to unlock it with a PIN, I won’t be.

My spouse is disabled and really needs the ability to unlock the door by voice to allow nurses and delivery people in.

I unlock mine with Alexa with the four digit pin all the time. You just say her name and if you want to unlock the door. She asks me what the four digit code is I give it to her and she unlocks the door.

I think I will wait a bit longer before buying the lock. I don’t want to depend on the Alexa unlock ability and then have it taken away later.

It unlocked for me once. Doesn’t work now, not sure what happened but I still want the feature to unlock the door with the 4 pin code.

Just tested mine and it worked for me too.

Are you on regular Wyze app or beta app? Can you show me your settings and how you set up the unlock routine in your Alexa app?

I know you didn’t ask my but just go to locks settings and enable unlock by voice. It’ll ask for your 4 digit pin. And done. 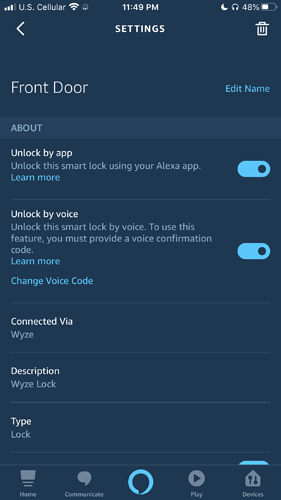 Yup, exactly what mine looks like. I set a routine but the only selection for the Lock was to “lock”. I set a routine anyway and when I say “Alexa unlock front door” she says “OK” but does nothing; door stays locked.

But I’m not setting a routine at all. It’s in the door lock settings.

I’m on iOS. So this may not help you.

At the bottom right it says devices. I select that. Then on the top it has them in categories like switches, thermostats, locks etc…. I select lock. I select settings in lock and that’s it.

I don’t go to routines at all.

Fred,
My settings are the same as Paindonthurt. Not a routine, just in the Alexa App click devices, select lock and turn on unlock by voice.
Also, I’m using the beta Wyze app on my iPhone so I don’t know if that makes a difference or not.

Thanks raym64 and paindonthurt. That was the issue. Creating a routine caused it not to work. As soon as I deleted the routine I got it to work.

Happy to hear it worked!

I discovered something by trial and error that may help some of you… I found a way to unlock Wyze Lock in an Alexa routine. Here’s how:

Replace “Wyze Lock” with whatever you named your lock, and replace “1 2 3 4” with your 4 digit pin. The spacing is important - you need a space between each digit of your pin code.
(Note that any time you use the “Custom” command, it has to be the last command in the routine.)

Creating routines that run this command when my wife’s/my phones return home has really helped to resolve my wife’s dissatisfaction with the lock due to the auto-unlock often taking much longer than it should (leaving her standing at the door waiting). Sometimes it’s so slow to unlock that it’s faster to just pull out my phone, unlock it, open the Wyze app, tap “Front Door” then manually unlock it (after tapping “Yes” — I DO want to cancel the autounlock). This routine fixes that.

Can we add an option for not requiring a 4 digit pin to unlock?

I understand Amazon requires it for this type of skill, but they also give you option to allow the user to opt-out.