Ability to unlock from Alexa routine 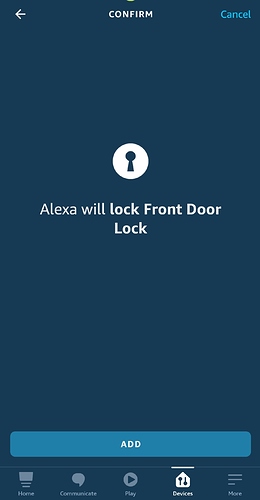 I seriously doubt this would ever be implemented since it would present a security risk; bypassing unlock security feature. But here’s the wishlist topic so you can vote on it just in case.

Agreed. To be honest any lock I have that allows unlocking without interactive code entry will be removed.

Doesn’t it already have automated unlocking based on things like Bluetooth proximity? How is a crafted routine different?

I have no objection to routines as long as they require a pin. I don’t much care for Bluetooth proximity based unlocking either, but that is at least based on a device being physically present.

Routines can be triggered in unforeseen ways and by unrelated events. Alexa’s forums are full of discussions about routines being triggered accidentally and unintentionally. The most common scenario discussed is having a routine being voice triggered and hollering from outside, but there are plenty of other examples. Including TV and Radios.

For this reason and others Alexa treats lock devices differently than others and REQUIRES a pin code be obtained.

Sounds reasonable, thanks. I would add, however, that there are situations in which an unconfirmed autolock can be equally or more perilous than an auto unlock… and yet that feature apparently exists.

Yes, as defaulting to a secure state vs an insecure state is considered ok. If you lock yourself out because of that I would point out that’s a risk that has existed since locks were invented.

Actually I was thinking more along the lines of inadvertently locking someone (with perhaps limited ability) IN… e.g. during a fire and the lock is difficult to reopen.

Again the same problem would exist without a smart lock, or if the batteries died, so if that’s a concern for you I would look at alternatives.

They make both deadbolt and knob locks with controls that are specifically designed for someone with limited physical capabilities. Including locks that NEVER lock from the inside and use a large easy to use lever for egress.

Smart locks are not an appropriate solution for every situation. If you are faced with such concerns then you may need to forgo using such devices. That’s a decision you will need to discuss with your loved ones and decide what’s acceptable.

All that said, I still see no reason to ever allow a smart lock to be unlocked without a manual confirmation. Can you imagine the lawsuits that would result?

It sounds like you are not a good fit for a smart lock, or even a moderately difficult to use deadbolt.

No, I wasn’t talking about myself at all. I was using my imagination about various use cases and threats.