Wyze Home Security monitoring: How does this home monitoring work?

Wyze is offering home security monitoring for $5 a month, if got this offer right. Any idea how this works?

Jeez, can’t they get web designers who can speak English, proofread, or at least use spellcheck? 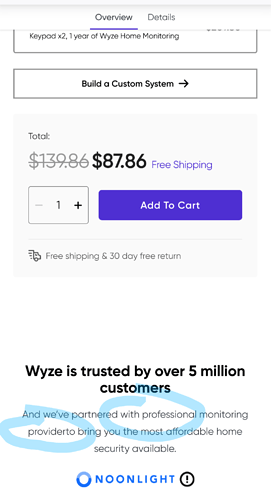 Be careful. Only ONE person can be on the monitoring service. Other household members will not be called or notified in the case of an alarm. It’s a deal breaker.

Is that true even WITH the paid monitoring service? That’s disappointing. I would want both multiple local contacts and backups.

Yes, even with the paid service, you are limited to one phone number. Somewhere in their support area, they mention that they are looking into a way to do more than one, but they have not committed to it, nor given a timeframe. Frustrating.

My wife and I share an account for this very reason. They’re supposed to add sharing. Hopefully that comes sooner rather than later.

That still doesn’t get you both notified?

You’ll get alerts in the app but if NoonLight gets involved only one phone number and one contact name. You can run it on a hundred different phones and that won’t change.

True. Would be nice to add a backup number to Noonlight. I think I read that it’s in the works.

Is there any update on this since June? I am interested in monitoring but it would be nice to receive calls to two different phones.