Yes, as a pair only though.

I think the v3 is the right camera. My garage is dark at night and if someone comes in the side door the light does not com on. The starlight night vision would be welcomed. Also, I live in South Florida and the humidity in my garage can get close to 100% and the temp in there can go over 90. I don’t think they make the v2 any more and the price was about the same as the v3 anyway.

Would this setup still work if the V3 and the GDC were plugged into separate outlets? I have an application in mind that would require two different outlets.

Yes, it would be good if it were available separately.

Yes, the V3 is the right camera if only for the reason the V2 is no longer made.

It would be good if a variation of the garage kit is sold without a camera so those who have spare V2 cameras could use a V2 instead. In this situation, using a V3 camera indoors to look at backside of a garage door for 99%+ of the time is a waste when V2 sitting unused on a bookshelf is perfectly capable of doing that.

Alternatively, I might just get the Wyze Garage kit with V3 and see if I can swap out the V3 camera with a V2 camera and use the V3 somewhere else.

I think they do sell it with out the camera: "Garage Door Controller Replacement Part Kit (no Wyze Cam v3 included) $18.99:. Or maybe I am missing something because it does not include the power supply type stuff.

Im having a major issue with both of mine… I did the test to make sure shorting the connection will open the door… so I know im compatible… But when i connect it in to the door, the box (wyze) clicks but the door never goes up. 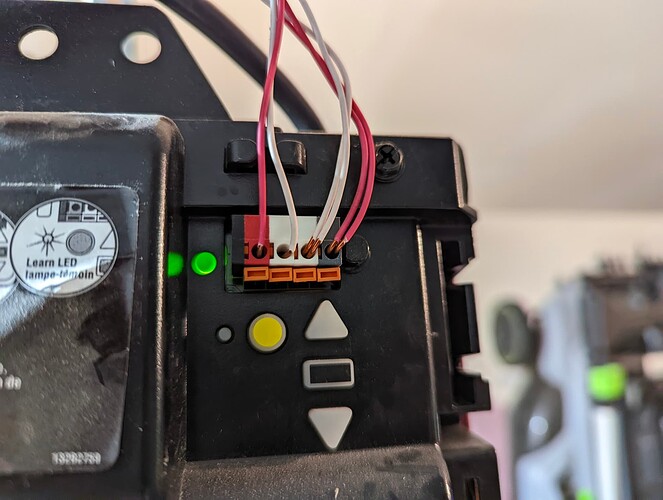 I know its the left two (red/white) because I disconnect them and my opener button on the wall stops working) but whenever I click the button in the app, nothing happens… The box clicks, but no door movement :). lovely

The V2 camera would need a short male micro-USB to female USB-C cable to connect with the provided wire harness. That is readily available on eBay. But were there any specific software issues? Can you provide a link to what you read?

Dunginhawk -
I have the same yellow button GDO so I’m hoping you will continue to post your progress in solving your problem. I’ve tried shorting the 1st 2 wires (red & white) with no luck. I haven’t tried shorting at the wall switch yet.

Ya know, there’s a tips and tricks thread on ideas of how/where to use a spare V2 after replacing it with a V3.

There’s one or two more threads here about the GDC and ideas. I wrote an idea that I think will help. I am lazy and not going to look for it, but I will try to replicate the same info again.

Some manufacturer’s controllers use a technique in the chipset’s firmware called “inching” Inching is a quick output turned on and forced off. It allows increments starting about about .5 to full seconds. You don’t need this info, its just useful to know what the controller is doing. Keep reading.

The hack.
For those openers that shorting the terminals won’t work (yellow learning button) the method is sort of a hack. You sacrifice one of your existing working GDO remotes. Open it, check the buttons that open your door. Now, trace the contacts that close the circuit when you press the button. There’s two places where the contact are shorted by the button. Find those two contacts and soldier two 6"+ wires to those contacts. Once done, test the wired contacts by shorting the wires to each other. Does the door open? Good, if not, you missed the correct contacts - try again. Now, drill a small hole for these two wires to exit the controller, feed the wires through the hole and close the remote up. Now, connect those two wires to the Wyze GDC, plug the controller in and engage. I guess might have to point the camera at the QR code. I don’t know. But now, the GDC is simple engaging your remote instead of your learning button’s terminals.

I use this technique with a Sonoff Basic WiFi switch. I used to use a Nexx GDC, with the remote attached. But I hated that Nexx enforce a PIN that Amazon insisted they program with using Alexa. Using the Sonoff cost me $6 for the device, and does not require a PIN or any security when I don’t want security.

Hope this help, you.

That was a clever idea changing out the outlet to a smart outlet. You’ve seeded several ideas for me.

I am using a power bar, mounted to my GDO support brace arm. The power bar was cheap, but hosts all the power bricks for several V3’s. Then I just used a spare smart plug,

I can power cycle my cams with the smart plug. Not as clean of a path of power as @R.Good, but it does the trick. And I should mention, 4 V3’s are wired to that power bar.

Why does all this seem like a kludged hack? And what happens when the Wyze controlled garage door squashes someone?

The garage door opener’s motor safeties are still active. The Wyze Garage Door Controller only “triggers” the opening/closing and not the actual motor. This is the same for any other Internet WiFi controllers.

Exactly! This is similar to my question too and is what I would like to know to see if my idea would work for using this setup on a motorized wrought iron gate.

Yes, like WiseCammer said, all the Wyze controller does is push the button. No different than if you had pushed it yourself.

My only complaints so far are not having the controller access on the face of the app. In order to open or close the door one has to open the camera first. My other complaint is the fact one can schedule closing the door but not opening it.

Why would you think that this device sidesteps or overrides, overpowers any existing safety measure on the GDO? Where’s the explanation, even a hint that cause one to draw such a conclusion?

There’s dozens of other manufactured devices that assist with triggering the GDO to open/close. Frankly Wyze is late to the party. Their approach is unique but not necessarily better. I bet I am not the only person here that already had a Wyze camera watching my door. More than one camera in my garage. Specifically, more than one V2 in my garage. And I already had a sensor to notify me the door moved - open and closed. The camera simply confirmed.

It just boggles my mind that there’s people that presume that a company would release a device to override safety of products. Have doubts or scared of the product? Don’t buy it, don’t contribute to it dangerous spread. Simple.