I just set up a voice pin in Alexa and it lets me open the garage door using the Wyze Garage Controller. Awesome! But then…not so awesome. Alexa can’t close the garage door once I’ve opened it. Instead it says the garage door is closed. It is very clearly open. The wyze app Home Screen is not updated with the open status, says closed. If I click on the garage camera device then click the open/close toggle button, the door closes.

Wyze, it looks like you need to sync/push the garage door state when opened via Alexa. In addition, maybe force Alexa to issue a close command even if it thinks the door is closed.

Anyone else running into this issue?

I get the correct notifications/events for open/closed from app, manual and voice assistant initiated actions.

The only way you could get the GDC believing the door is closed when it isn’t (without a bug) is to put the QR code on a wall in sight of the camera, and not the door. You guys didn’t do this, did you?

Also, the home page will not show the current state of the garage door unless the home page was just entered, or you do a pull-down to refresh. Does your home page show an incorrect status after a refresh?

If the problems persist after the above, then we need to get the GDC PM in on this.

Same or similar problem here. Alexa opens the garage door just fine. Telling Alexa to close the door does not work. She responds with the expected closing/closed announcement, but the door does not move. However, if I tell her to OPEN the door while it is open, the door closes and she tells me it has opened.

I have same prob, Alexa will open the door wonderfully, however when I tell Alexa to close the door, nothing happens. I see Alexa is listening to me, but nothing happens. I’ve tried this within the Alexa app on my iphone as well as Alexa show.

Just got my v3/opener deal during prime day. Just set it up and I’m having the same problem. Wish the camera could be accessed in Alexa app too but at very least I hope it gets fixed where it works correctly

I toadily agree that it’s not ready for prime time, even though the page for the garage door opener advertises that it works w Alexa. I’ve given up on Alexa & brought out a google mini that I had in storage & use that for opening & closing the door. Unfortunately, I can’t connect 1 to my iphone, or I’d set a mini up in my car too. As is, I have to open my phone, open Wyze app, & dig down to my garage door group, open the garage door camera, & have then use the controller.
BTW, have you tried recalibrating your camera?

Same here. Alexa will open, but will not close despite what it says. Switched over to Google Home, had similar problems and worse.

I had the same issue and it took me awhile to determine the issue. My door was closed but it said it was open. Bring up the camera, and if you do not have in the image a red square surrounding your QR code, it is not properly calibrated. If it is not calibrated open and close your door 5 times, and by default it will then ask you if you want to calibrate it. Say yes and go through the process. I had to do this multiple times each time moving the camera and where the QR code was on the door, before it finally put the red square around the QR code in the camera image. If it sees the QR code it knows your door is closed. No where in the installation instructions do they mention anything about if it sees the QR code, it will put a red box around it. Once you have the red box you are all set.

No where in the installation instructions do they mention anything about if it sees the QR code, it will put a red box around it.

Not sure this is actually required. My GDC has never failed to see whether the garage door is open or closed, but it does not show a red box: 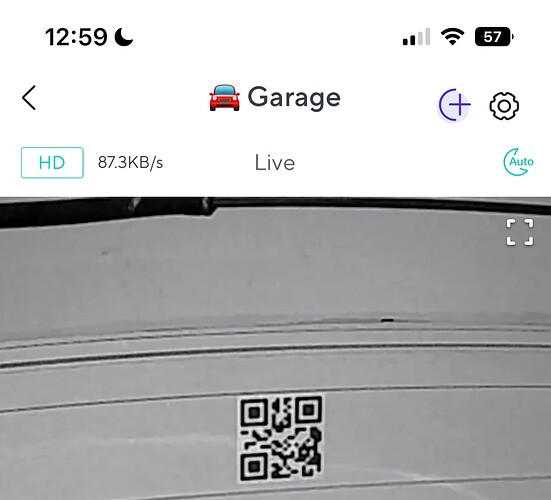