Wyze Doorbell When Home Has No Existing Doorbell

I’m dealing with a renovation. The home originally did NOT have a doorbell, so it did not have an indoor doorbell chime. I assume this is not a problem and that the Wyze Doorbell will work without me having to deal with doorbell chime wires that don’t exist.

The electrician ran wires to the outside entry for the express purpose of putting in a doorbell. I assume I can use these wires to connect the Wyze doorbell, and then it’s a matter of me putting inside as many Wyze chimes as I want.

Yes it will work as those with chimes are bypassed during install. Is there a transformer installed on the other end of the wires?

Thanks Ken. I assume there is a transformer on the other end of the wires, because during the renovation the electrician was specifically tasked with making sure we could put a buzzer out there (we weren’t thinking video doorbell at the time; around here, people use buzzers, so that was my wife’s first thought when she was designing the remodel). But whatever would power the buzzer would (presumably) power the video doorbell.

Still, the electrician isn’t finished with other work, so when he returns for that, I’ll be sure to get a definitive answer.

I’m assuming by “transformer” you’re referring to the power source for the doorbell, so, it could be a circuit breaker in the electrical box? Or do you mean that it needs to be something like a low-voltage transformer separate from a typical circuit breaker?

Yes low voltage transformer, 16v-24v. I’m not sure if they typically have their own breaker. I know on mine it has a powered smoke detector on the same circuit, maybe more.

I did not have existing wiring on my house either. I got a plug in adapter and it works perfectly as a temporary workaround.

on the specs I believe it states the Wyze doorbell needs to have a 16V -10VA transformer.

Can you share the details and where to get the transformer that worked for you?

This is the transformer that I bought. It’s working great. 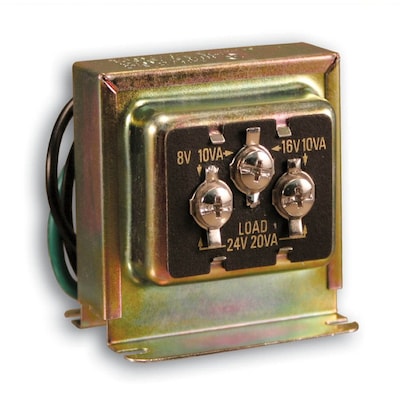 I ended up getting a 16V, 10vA chime transformer because the larger one I tried (30V) wouldn’t fit in the hole. This one may just barely fit, I had to order it from Home Depot and just received it yesterday. It’s the bare minimum to run the Wyze doorbell. Store SKU # 1001766774 if that helps.

I’m in a similar situation. 100 year old house, powered wire (18V tested) to the doorbell, no idea where the chime ever was to jump the contacts. And for a bonus round I spent an hour crawling under the house to find wires, only to conclude they are in the inaccessible attic. I was so excited when I read about a powered button and a wireless chime! Any suggestions? Or forecasts on a battery operated button?

Wyze Video Doorbell is a wired doorbell that does not have an internal battery. It must be wired to your existing doorbell wiring for it to have power and work. If you are dealing with a renovation you check out lowes home services or call a professional for services.

Crazy question - I just gotta assume (bad idea, I know) that there is a diode bridge or similar inside the Wyze that converts the AC to DC anyway? Has anyone ever tried to run the doorbell off DC at all?

So, I just pulled the existing wires and boorbell transformer and replaced it all new. As long as you have a 16v transformer and standard doorbell wiring it’s pretty simple. If you’re not comfortable working within the circuit breaker box then I’d call a professional. To be honest I just Googled and YouTubed a lot and figured it out pretty easily. If need be I’ll make a YouTube video on how exactly I did it from scratch.

My issue is with a remodel. The hole in the concrete post where the doorbell wires are located is too small for the transformer I got at Home Depot to fit. Not sure the hole can be widened without excessive cost involved. Will have to check with the contractor. If it can’t, I’ll have no choice but to return the Wyze product.

Usually the transformer is by the circuit breakers so you have low voltage delivered to the button and bell. Check the existing voltage on the wires, either with a meter if you have one or by seeing if they will light a lightbulb.

My recollection from a discussion with the electrical contractor is that the wires to the doorbell box come from the same circuit that powers two standard outdoor lights, and that’s why he said I needed to get a doorbell transformer for the doorbell box. So I’m pretty sure it’s not low voltage going to the doorbell box. But I’ll double-check with him, just to be sure.

If you don’t have an existing door bell circuit, and if you’re not worried about breaking warranty, just power your door bell using any 5V USB source like a Wyze camera. Search the forum on how to do this.

A new transformer costs almost the same as a Wyze doorbell, not including the cost of laying out a new circuit.