My home has an existing wired doorbell but it has never worked. The doorbell itself was broken and I had waited for Wyze’s doorbell to upgrade. In my 3 years of living in my home I had failed to realize that we did not have a chime despite having both a transformer and doorbell. I need help with wiring. I know the chime is bypassed for simple set up so I’m assuming this shouldn’t be an issue for me but I want to make sure I get it right to avoid multiple trips to the transformer in an awkward spot in the house. Do I just connect the 2 existing wires leading to the doorbell to the transformer directly?

Do I just connect the 2 existing wires leading to the doorbell to the transformer directly?

yes, that’s exactly what you do, assuming those 2 wires go directly to the transformer… if u had a chime you’d be basically doing the same by removing both wires & connecting them together, leaving you with a direct connection to the transformer 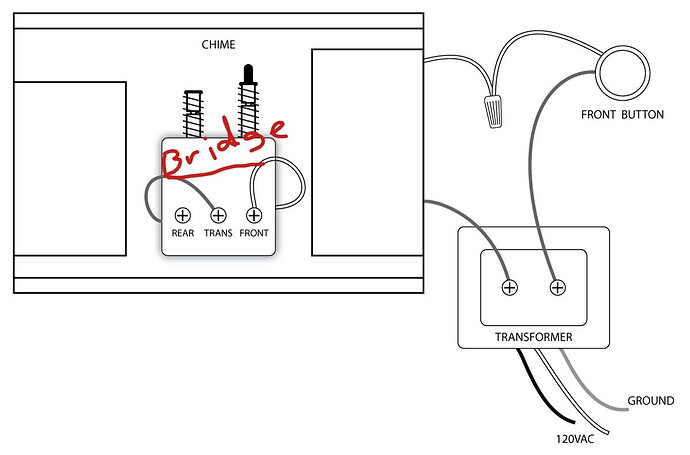 Thanks Ken! I tried that. I tested my transformer to make sure it was receiving power and it read around 20v. I checked my wires at the doorbell and they were only reading 10v. I switched out my transformer since it was so old and I wanted to rule that out as a possible failure point. The new transformer read at 27v but I wasn’t getting an increase of power at the doorbell wires. At this point I’m frustrated since my transformer is in such an awkward placement and I struggled with the swap. I’m going to come back to troubleshooting another day.

So even with the new transformer you’re still getting only 10v at the doorbell? Did you bypass the chime?

Question with direct wiring to the transformer I assume you do not need the resister bridge wire or should I use it on one of the wires so it has a resister?

I assume you are referring to the fuse that is included in the doorbell kit. Yes, I would still use it on one of those wires.

This is what I used: Amazon.com

I currently have a Eufy Doorbell and it works great with it. However, I am waiting for Wyze to get stock so I can switch.

yes, the chime is bypassed during install. technically you don’t need the fuse but it’s probably a good idea to install it in case there’s a power surge from the transformer.

Thanks all. This thread helped me today!