WYZE car is fun. Turning radius requires a bit of skill. My suggestion would be for a powered base and attachment for the car that allows it to be charging and on all the time. This way it could be a mobile sentry cam and leave it’s base as needed to see and search the house. Then it would have a very practical application instead of being a wonderful toy.

The only side Justin I have is well there’s two first make it quieter. It’s very slow shouldn’t shouldn’t be that noisy I would expect it to be noisy if it was a fast car The video and everything works great The speed of the car is very disappointing and I love Wyze products I’m still determining whether I return this. If somebody at Wise can tell me how fast this car is supposed to go cuz maybe I just have a broken one I see people on videos driving over tall grass mine doesn’t move on grass and that’s after I mow it.

For what it is…$50 Toy…I did buy 2 for the backyard…If you are looking for the Real Deal…https://www.motionrc.com/

HI… looks the WYZE car. Any thoughts on adding some mapping function and which allows the car to “patrol” the property/house ? or another feature, if a camera detects motion the car can go to that location ?

I just got mine today and don’t see how any honest person could give this a good review. The turning radius is worse than a $30 RC from Walmart, It has no power, my matted down, less than an inch thick carpet makes it struggle you need about 6 foot of space to make a 90 degree turn on something this small. It is so loud that it makes the microphone for recording useless because all your video will really hear is the loud noise from this car. Just like the door lock that worked for a couple days and then kept jamming to the point I almost broke my key multiple times trying to unlock it this is garbage and basically a paper weight. I bought this for my son who is getting into video production as a cheap mobile camera like the drone helicopter I got him a few years ago, but this does not even compare, it is not easy to control at all, you have to pay more attention to driving this thing than recording. This is a ripoff which sadly has become the new norm for Wyze products. Loved your cams but you have dropped off a cliff on mostly everything that followed. I have five cams 4 v3 two v2 on my porch, I have the door lock in a drawer because it is useless, I tried torqueing it at different levels and every time the same thing happened, it would work for a few days maybe even a month and then just start jamming. The security system is useless, it constantly stops working even though everything is setup for auto updates it never updates on its own, it loses connection with the server constantly. When I first started buying Wyze I was comparing them to the Ring 2 Doorbell I had, and they compared favorably, that is no longer true besides the price difference, my older Ring actually functions better than my Wyze cams with Cam Plus on all except the one being used in the car, I also paid for the annual home monitoring which I never activate because nothing stays connected to the service. I have 800 mbps internet, I have Google WiFi with 4 connection points, so there is plenty of wifi connections, this is a dedicated network just for smarthome devices, Alexa, Google Home, 4 FireTV devices, and Wyze is constantly not working. The motion sensors work less than 50% of the time to trigger things they are supposed to in routine through Alexa. Wyze has just become garbage and the only reason I haven’t moved to another brand is because I have so much already invested and was hoping you would improve but instead you have gotten worse, blame it on AWS all you want but if their servers are so unreliable switch. Thanks to Wyze I have about $1000 invested in future trash when I can afford to replace it, and I used to by a Wyze fan.

AGREE!!! Wyze is Rebranded Aliexpress goods. AWS issues…Wyze should Prorate the down time.

Sorry I started this thread with a proper suggestion. It was not supposed to be a place to vent.

All views are Welcome here…Wyze products are Frustrating to many and fine for other’s. You get what you pay for.

Yeah Wyze is trying to new products that haven’t been thoroughly tested anymore and that car is my biggest letdown. I’m going to look into selling it or tinkering with it and see if I can make something worthwhile. I can’t even use it as a RC cuz it sucks as an RC.
Telling it on eBay’s probably what I will do because they’re out of stock now and maybe somebody want one for Christmas
-Mitch

I started this thread as a product suggestion. So you are telling me that I cannot defend the purpose of my threat and support WYZE yet it is perfectly acceptable to rant and attack. In that case my opinion has equal or greater merit.

I understand some people go off on different directions I did mainly because the wise car is nothing close to what I expected Don’t get me wrong I’ve been a wise customer since the first year they started their number one thing that made me attractive to them was the no fee for using a security camera.
Not to push any buttons why does the car only work with one of their cameras. I’m not returning my car I’m just going to use it for non-security issues Have a wonderful Christmas
-Mitch

I normally don’t reply.
Have a Merry Christmas and Happy New Year

Well, I’m in the minority I know, but I just got the wyze car delivered this morning, and within 15-20 minutes, I had it assembled and the new black V2 camera I purchased last week installed, flashed and running… This is a great little toy…

I’ve had it running for about an hour and a half now, and it’s still showing all 4 LEDs lit on the battery pack…

get one of these magnetic charging cables, (See attached pic), and leave it plugged in… drive away from the plug and the cord will pop right off…

…now maybe if you had the cord hanging, you could back the thing up to the cord, and it might attach itself again… (The magnetic pulls from about an inch and a half away), but that might be asking a bit much… It would hard to see in reverse…

Rube Goldberg to the rescue.

I’ve got another one of those magnetic charging cables on order from Amazon, so I’ll give it a try, and report back after Christmas… 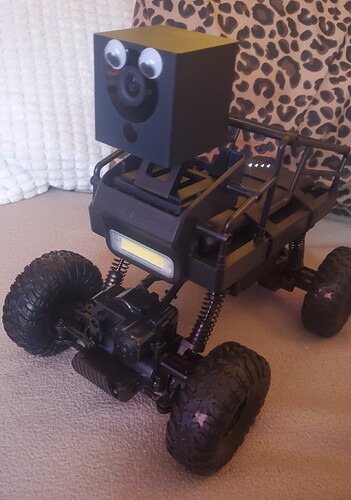 Thanks
I’ll let you know how mine works. It might be a few weeks

Two! Interesting Play tag it’ll be pretty cool in ultra slow motion. I got two girls maybe I will buy a second have a Merry Christmas

Update… I’m almost 3 hours on the fully charged battery …still hasn’t budged… 4 LEDs still lit. driven it around the house a couple times, access the camera as it sat over on the other side of the room maybe half a dozen times, and took a couple of videos and pictures while driving…

I’m impressed with the battery life so far… When it gets to one LED I’ll plug it back in and see how long it takes to charge to full again… Then I might just leave it plugged in, once I get that magnetic charging cable… I have a plug right next to the slider that goes out to the back deck… I think I’ll leave it there, pointed out the window, as an extra, (mobile) camera… 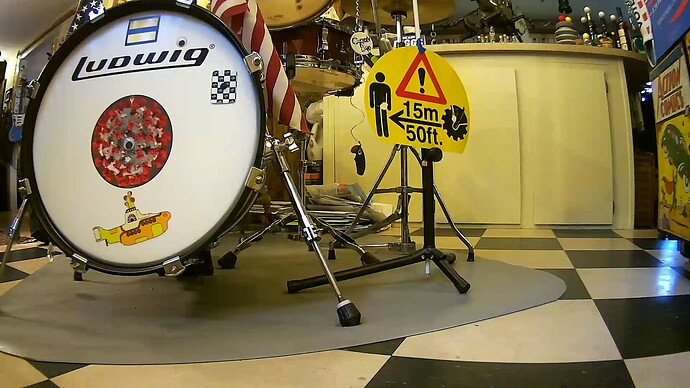 I ended up swapping the motor chips for 12v versions. It works so much better now with a dewalt drill battery powering it.

One “hack” I found was disconnect one of the pairs of drive motors. Then you get more battery life and slightly more speed with the stock setup.

Thanks Franko,
Could you help me figure out where to get the 12 volt versions also how many volts is the DeWalt battery

It’s been a while but they are the same chip as what’s in there but 12v version. You can even put 12v through the 5v but they will burn up if you run it too long. Look up the part # on the current chip, then look the datasheet and you will see the 12v version. I dont recall the part# at the moment but it was close to the 5v part #.

the dewalt bats I used are also 12v. I just happen to have those with my dewalt 12v stuff and had already printed some battery adapters to use with them so it made it easy to slap together. You can use any decent 12v lipo pack as long as you can connect to it.