Just the other day I purchased a Wyze Cam v2, and so far the video is fantastic. It senses motion, and I was able to configure specific triggers which work like a charm. The camera is connected to the 2.4GHz connection, and so if my phone. I inserted a 64GB micro SD card, and then the timelapse option was made available.

So, I have tried on three separate occasions to do a time lapse and I am not seeing any videos in my albums. I can configure the time lapse and set it. It tells me that it is set or it will end at a specific time.

After that time, I don’t see any video in the album, only random motion captures. Am I missing something?

Looking forward to your responses!

You say “album”, but since you are seeing motion captures, it sounds like you are looking i the Events tab of the app. Instead, go to the camera’s live stream, then tap the More button, then Album. You should see the time lapses listed there. You must be on the same local wifi network to download them.

As Loki says, you need to look in the Album for time-lapse recordings. However, I’ve found that often my TLs don’t appear there. My workaround is to remove the SD card from the camera and mount the volume on my Mac. The TL files are named record.h264, and stored in a folder named time_lapse. The file format is a bit odd, but can be viewed with media players like VLC.

This is a known bug, and has been reported to Wyze by a number of people.

Hi Loki, yes I didn’t explain that very well. Under the Events tab, I do see the motion captures. When looking under the albums it says “There are no videos in the album”

Hopefully that clarifies it for you. 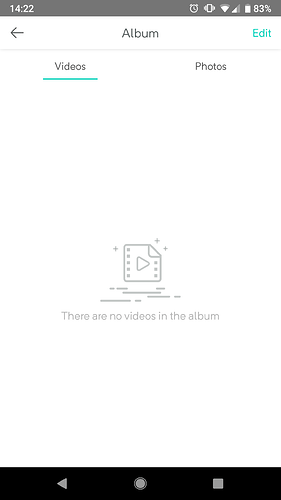 You are looking in the right place. If it’s been a while since the time lapse completed, and if you’re on the same wifi network, and if you’ve done a pull-down refresh of that page… it might be an Android specific issue (I’m only on iOS).

Keep in mind that this forum is primarily a user to user community. If you don’t get a more helpful reply here, I suggest you file a support request including the log files for more help. You might want to go ahead and submit your ticket now as there is somewhat of a backlog. If you end up getting the issue resolved before support contacts you, then you can always let them know that it’s already resolved.