My parents are in need of cameras. I was looking at the Pan Cam v3 for them. However where they need to mount the camera on the outside of the house is much further than 6’ from an outlet. For my cameras, I purchased a longer micro usb cable and was set. Given this camera uses an L shaped connector, it limits options. I contacted Wyze on how to extend the cable. I asked if a USB A female to USB A male cable would be suitable given the connection would be under a front porch and away from rain. The response is that they don’t recommend using a 3rd party extender… I don’t want to mount an outdoor extension cord along the roof of their front porch. I looked on Amazon and couldn’t find a micro usb cable with the same end connection as they are using. How many homes are going to have an outdoor outlet within 6 feet of where you want to mount a camera?

Does anyone have any other options that you can think of? How is everyone else mounting these outdoors? Is everyone within 6’ of an outlet?

Forget what Wyze told you about the extension cable. They’re just covering their behind. A quality USB A Female to USB Male should work fine as long as it’s not over the USB distance limit, roughly 20 ft. An active extension cable can easily go up to 80ft.

I looked on Amazon and couldn’t find a micro usb cable with the same end connection as they are using.

Yes, Wyze dropped the ball here as they designed their own proprietary plug that limits most if not all users.

Is everyone within 6’ of an outlet?

Not really. I for one have two outdoor outlets at home, one at the side and one at the back of the house. Not even close to 6 ft of any of my cameras.

Thank you for confirming I was not going insane.

Regarding the USB distance limit, if the device comes with a 6’ cord, then a 15’ extension cable would be too long overall? Apologies if I’m not understanding properly.

Regarding the USB distance limit, if the device comes with a 6’ cord, then a 15’ extension cable would be too long overall?

Please comment on and/or vote for this wishlist request:

this camera is meant to be on ceiling or outdoors. the connection at the back is proprietary and so apparently is the cable power specs. can you please offer an extension cable (20 ft,30 ft etc?)

I came here to discuss this as well. The design is either not thought through or done on purpose, for whatever reason. IMHO, they could have designed something exactly like the Wyze V3 for the other outdoor cameras, there was no need for this odd plug. I’m sure lots of companies will offer cables in the future.

I’m in the same boat. My Wyze V3 is facing my driveway and sits above my overhead garage door. I’ve run a 20ft USB cable to it. I have had no issues. I’d like to replace it with the V3 Pro OR the Pan V3 due to the timeline feature. The Pro is out of stock and I haven’t seen the power setup on that, I hope and assume its the same as the V3 but the V3 Pan is now not matching this because I’ll need either an adapter or a different cable which I really don’t want to deal with.

For the record, you can use something like this if you can have it sit inside or have it protected somehow from moisture/water. Technically, I could use this but meh, I don’t like additions to my wiring.

I share in your frustration. I have V3 cams that are soffit mounted and already powered by aftermarket 20ft microUSB\USB-A replacement cables. It would have been so easy to do a cam upgrade swap had Wyze not introduced another proprietary plug.

I have 4 PanV3 to install. I had already ordered and will use the same adapter you linked to connect mine rather than rewire.

The V3Pro does have a female microUSB plug, but unlike the V3 it is NOT in the form of a pigtail with a weatherproof boot.

Rather, the plug is in a well in the back of the cam. The cord that ships with the V3Pro is yet another of Wyze’s proprietary designs to plug into the microUSB on the back of the cam. Specifically, the housing on the male microUSB cord plug is sized to fit into the well and tightly seal. It is possible to find other cords that will fit, however they may be extremely tight and not seat all the way to the bottom of the well. There is also the possibility of water intrusion if they do not seal properly. 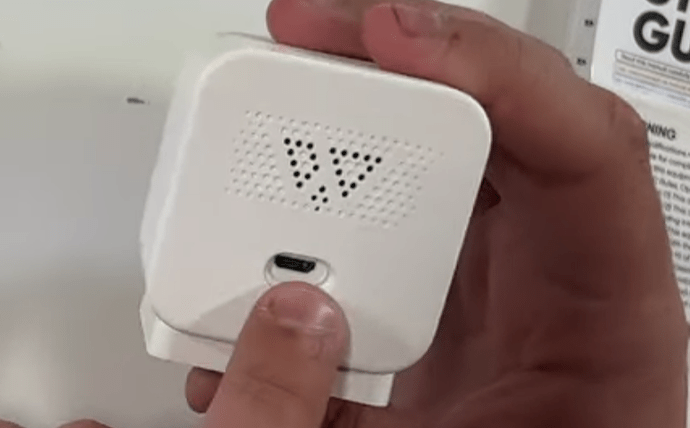 Given this camera uses an L shaped connector, it limits options. I contacted Wyze on how to extend the cable. I asked if a USB A female to USB A male cable would be suitable given the connection would be under a front porch and away from rain.

The best extender is a 120V extension cord, if the cable is waterproof or sheltered from the elements. The second recommendation would be exactly what you suggested, a quality USB A female to USB A male cable. I too wouldn’t run it more than 20ft (especially important for a Pan camera with motors), otherwise I’d look into other options (and there are some, but they are more complicated).

If you are running a cable outdoors, the below Self-Fusing Silicone Tape can waterproof the connection. It has no glue, it only sticks to itself. Very clean. We used to use this to waterproof connectors in my military days:

Thank you for the suggestion!

As @Newshound said, 110V extension cord is the best, but if you can’t do that make sure that your USB A extension cord is intended for printers, game consoles, computers and such. Should say “Active” in the description. Example below.

Is this critical for a cable that is only being used as a power supply (with no data flow) ?

Might not be, but as @Newshound mentioned, this camera has a motor and that motor might draw considerable power. To top it off, siren, IR lights and other things need constant, reliable power. As I said, the active USB has thicker wire that contributes to less power loss. Regular USB cable might work, but for few extra dollars you are playing it safe. I have three V3 cameras on a regular 42 ft USB cable, and they work fine. The only issue I have is when I activate the siren, but I don’t use the siren so I am ok with it. At the end it is your choice, setup, time and money.

Understood. Thank you for the explanation!

This is so frustrating! I need a longer power cord than the one included with purchase. I went online, but could not find an L shaped cord. When i live chatted with WYZE i was told that there was a 15 ft cord available and they would email me the info. So far, no email. So I called and was told there is a 12.5 ft cord available, no 15 ft cord. I was also told that I can go to Amazon and get a longer cord for the cam pan v3. I replied that I had already checked, and the cords were not L shaped. The representative went online and assured me that Amazon had them. So I hung up and went back online. I can not find an L shaped cord. UGH!!

You don’t need, nor want, an L-shaped connector. The connector supplied is part of the waterproofing system, so please don’t replace it.

You just need a commonly-available USB-Type-A-Female to USB-Type-A-Male cable. I’d try to limit that cable length to no more than 20 feet to avoid dropping the voltage to the camera too far. 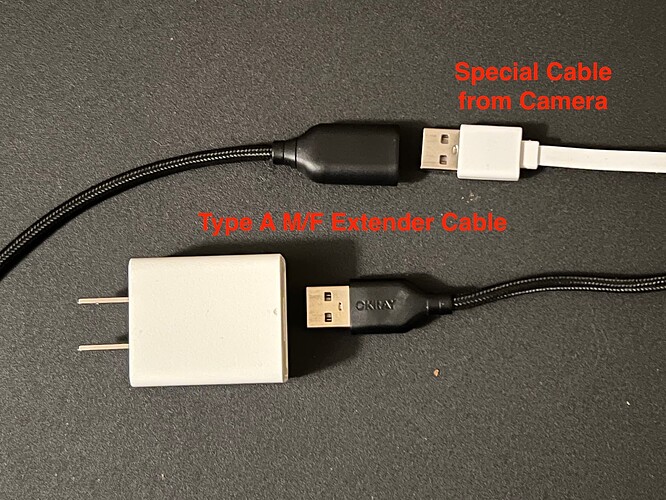 But running a 120V extension cord is even better, if that cord is protected from the elements (no voltage drop).

Yea not sure what the WYZE Guys were think entry only having 6 foot cable with no long extention option or 3 party option compatability. Very Disappointed
Glenn

Thank you!! I will try this for sure!

I agree. They did not think this one thru. I do like the camera tho.

Wyze is thinking about a long extension option. See this post.

For those hoping for this, Wyze announced some good news in their AMA today: So it sounds like something is coming soon! They didn’t say any other details though, just that it is long and an extension cable just as was asked for here and they used the word soon. I just wanted to pass on the good news for those following this thread.

These are available in endless variations. It is a Male\Female USB-A Power Extension Cable as posted above. My Amazon search resulted in over 10,000 listings.

You don’t need, nor want, an L-shaped connector. The connector supplied is part of the waterproofing system, so please don’t replace it. You just need a commonly-available USB-Type-A-Female to USB-Type-A-Male cable. I’d try to limit that cable length to no more than 20 feet to avoid dropping the voltage to the camera too far. [Extender Cable] But running a 120V extension cord is even better, if that cord is protected from the elements (no voltage drop).