I do not have an outlet near where I need to mount the cameras. Can I run a 10 foot USB extension cable from the power adapter to the Wyze USB supplied cable? Any considerations when selecting the cable?

Yes I could run a power extension cord. I would prefer to run a low power 5V cable across the top of the garage.

I don’t think 10 feet should be a problem.

I think 10ft should be fine as long as you get a decent cable. However, if you intent on using the siren feature it may have some trouble. Longer cables deliver less power and sometimes the siren fails when not enough power is delivered

Not sure, haven’t tested it. Probably would work.

Not sure about the light either, but the siren works on mine over 40 feet of cable.

I have not tested the V3Pro on an extension… Yet (going to now though). It does have additional power requirements and is shipped with an adapter providing more amps than the V3. We shall see.

I have 5 V3 running long term with no feature loss on these cables:

I think you should watch for any hiccup. Any hiccup being literally anything odd. (I like to group all odd Wyze situations into a hiccup), And if it does, you could consider replacing the power adapter with one that is higher amperage. I agree with the need to use a longer cable.

I have replaced all my Wyze adapters with 2.3 amp since Wyze’s are 1.0 amp. Yes, I am sure this is overkill. But I have some more than Wyze standard cable distances. And had different hiccups, but when I used a different adapter, nearly every problem ceased. I bought a couple of higher amperage adapters and put them where the power cable was long. Then some that were Wyze cables, but a long distance from my WiFi node. Each time, I improved power, the behavior of the camera improved. So, before long, I had replaced everyone. In a couple of places, I was lucky to replace a 2-3 slot USB 2.3 amp for two Wyze 1 amp, and saved some $$$. That worked too. YMMV, but this worked for me. Worked best for me.

I think of it as saving the time I spent figuring this out, time well spent for every newer camera I setup.

We see so many people posting their issues with cameras dropping off line, that I think can be resolved with a “better” adapter. Said it enough times, that it got old saying it, and I generally don’t keep saying it.

No issues whatsoever delivering enough power to the cam for simultaneous operation of Live Stream, Spotlight, and Siren.

ALSO: The V3Pro does not have a rear pigtail power cord with a weather boot like the V3. The cord it is shipped with looks to be specific to the V3Pro with special markings on the MicroUSB end that plugs directly into the female MicroUSB port on the back of the cam. If the MicroUSB extension cord does not have exactly the same dimensions on the housing of the male MicroUSB as the Wyze cord, there may be issues with it fitting. I found it quite difficult to get the extension cord fully seated. I would seriously worry about weather \ moisture issues at this plug.

wow, 2000mA adapter. Is that not a first? I don’t know about you, but I think that hints that the 1000 is barely enough for the other places - other cameras where it is used.

It certainly does indicate a higher power consumption requirement for the new features and capabilities of the cam. I’m not sure that it points to a low power supply for the older cams though. The two Pan models also shipped w\ 2000mA adapters due to the motors in the cams.

Even the power adapters I received with my Version one WCO cams are all 5 Volt, 2000mA, I got one with each of the 4 cameras.

I have replaced all my Wyze adapters with 2.3 amp since Wyze’s are 1.0 amp.

Same here. All my cameras except the one above my garage door have non-Wyze adapters. These are the ones I use, they are not as deep and allow me to use them with weatherproof outlet enclosures as seen in the picture bellow. 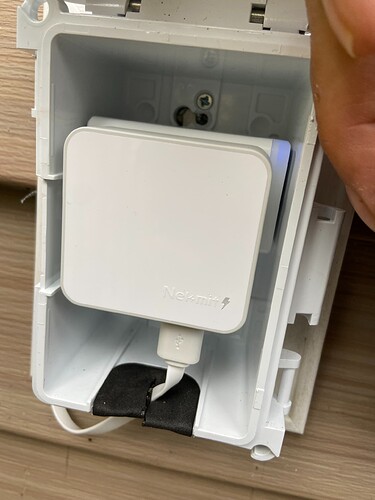 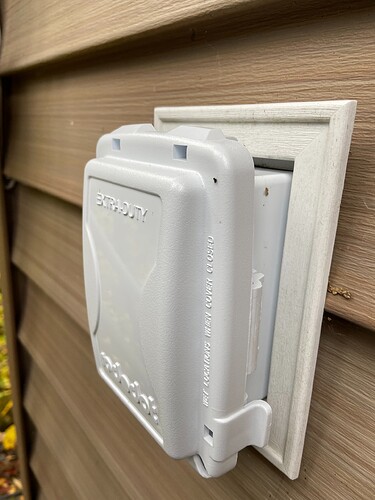 Careful… that’s Canuk! Here’s the US…

I tried to use an extension for my new V3Pro and it didn’t work. Maybe the plug wasn’t in all the way. Will have to try again.
What is the focus (beta) option supposed to do?

Smart focus basically zooms in the camera view to follow the person moving. It’s useful to zoom you into the action

Mine was also difficult to get the extension plug to seat all the way.

The Smart Focus Beta is a Digital Zoom feature. When the cam detects motion, it will zoom the PIP window in on that which it detects moving and will keep the moving object within the zoom PIP while it is moving within frame by tracking it. When motion stops, the PIP window should close.

It is also supposed to be able to swap the PIP so that the zoom is in the main view window and the full frame live stream within the PIP.

Hmm, ok thanks. I’ll have to try it. I clicked on it before but didn’t notice anything different. I now have it aimed out a window onto a portion of the backyard. Do you have to have a certain other setting on for that to work?

I read someplace here before that you can use the same power cable that the V3 uses but the power adapter must be the 2 Amp not the 1 Amp. I have a 25 foot extension plugged in to my

I just played with toggling it on and off. When I first opened the cam it popped up but then went away. I think there has to be motion when it is enabled for the PIP to pop. BUT… Every time I reopen the app it is then disabled (greyed out)… Hmmm

? Will have to test this. Not sure if it is working right or not.