I recently installed a Wyze Cam Floodlight to replace an existing flood light that was on a standard light switch inside the house. Afterwards I installed a Wyze Smart Switch as to keep the kiddos from turning off the power to the floodlight. In trying to setup the switch for smart control I wanted to just single press to toggle the flood lights on/off without cutting off the power to the whole device. Is this possible? I was able to get the double tap and triple tap to turn on and turn off respectively but this is not going to be user friendly for most people.

Not sure if its a bug but when doing the Single press action setup if I select floodlight from the device list it will actually turn on/off the whole device instead of just the lights.

I have this same question. I haven’t purchased yet but I need the ability to turn it on and off manually in a way that doest require me to teach people “2 clicks does this …”

Same here. The options between the switch and the camera seem to NOT work in the perfect ways to let me do what you described. Seems like the rules don’t work to turn the light on with the switch.

Wondering this too. Havent installed yet but thought about just disabling my light switch so it’s always powered on. I’ll have to use the app or Alexa to turn it off but I want it to always be powered. If there is a smart switch that can just toggle the light itself that’d be useful. Watching…

Add me to the list of people curious about the ability to turn on and off the floodlight manually while leaving the power on to catch motion.

I have not installed yet, but this can be done with a double press on the Wyze switch?

Just got my wyze switch installed and set up to hopefully control the wyze floodlight. Whenever i go into the switch settings to set up an advanced control option (double tap, etc) and select the wyze cam to control it gives me an “internal service error” message and does not let advanced settings proceed.

I have installed the wyze flood and wyze switch as well. Would love to be able to program the single tap feature to turn on the flood lights. I currently have that programmed as a double press function. I hope someone from Wyze is reading this thread!

I’m looking for this functionality as well. I have the smart switch installed with 3 Wyze Cam Floodlights. I obviously want the power on to the cameras and motion sensors at all times and would love for the switch to turn on/off the flood lights with just a single press.

I wholeheartedly agree! It’s amazing that Wyze did not see this as a natural use for the Wyze smart switch. Much more elegant solution than putting a “sticker” on your old floodlight switch to prevent people from turning it off. Hopefully they will catch on and make changes so that the switch is more friendly to use with the Wyze floodlight.

I use this to prevent switches (paddle, U.S.) with smart devices from being turned off. It’s better than a sticker, but not as slick as using a smart switch.
https://www.amazon.com/Switch-Protects-Circuits-Accidentally-Off-WHITE/dp/B095P6HFW1 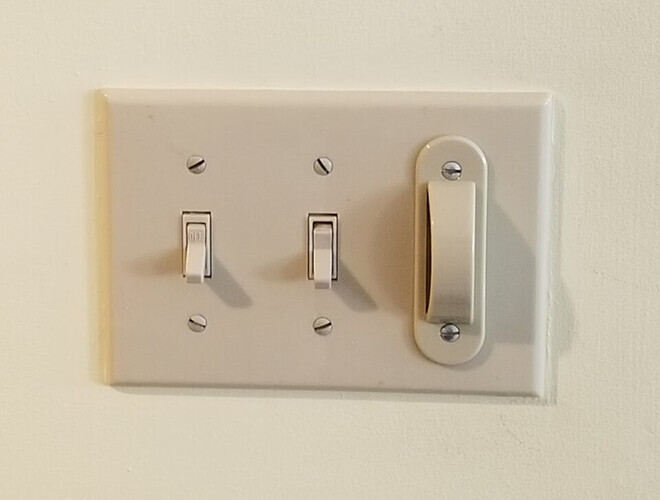 This basically costs about $1.

This is what I used to prevent the light from accidentally being turned off.

Yep that will work, but in my opinion a smart switch is a better option.

But if you never want to turn it off, just blocking the paddle with the $1 plastic cover is best.

True, but sometimes the floodlights need to be powered off and back on to reset them. This would require removing the blocking, right? With the Wyze switch you can do this from the app.

If you look at my picture, it’s open on one side (only) to let you toggle the switch.

I hope people will stop hijacking this thread as I only want to be able to single press the smart switch to turn on/off my wyze floodlights.

I have tried repeatedly to use the rules and everything looks correct but the floodlight does not turn on. I would hope that someone from wyze support could escalate this as a potential bug in the app/rules.

It appears that the rules issue is the smart switch as any rule i setup for on off toggle is not executed.

I was looking for the same functionality. Not sure if it was also add to the wishlist thread.

@NiceGuy79 if I understand correctly, you want to leave the camera on all the time and then turn on and off the floodlight with the press of a button.
This is the way I’m using mine. I simply added two shortcuts/rules to the app to turn the floodlight on or off. I have the floodlight set off in settings, but I can toggle it on or off using the shortcuts. I still get motion detection from the camera, but the floodlight will only come on when I explicitly turn it on.
I don’t use a smart switch

So it appears that the issue which I already started a new thread is that the wyze smart switch does not use the rules when setup.

I want to be able to override the floodlight when i go outside and then set it back to normal programming when i come back in (i.e single press on & off)

Any luck with this? I need that analog ability to control the flood without turning off the camera.