I would remove app and install again. Easy process as long as you have saved down your user ID and password.

FWIW, Wyze has always been pretty good about memory usage and caching of data, but I did not today that I have about 900 MB cached in addition to the apps 61.6 MB. This with 4 Wyze cams active at the moment.

But many app developers these days (not saying Wyze) are horribly “sloppy” in memory management and end up hogging tons of space. I guess everyone thinks “only 1 GB, no big deal”, but when many apps are hogging unneeded data, even the largest device can run out of valuable room.

The memory used by the Wyze app on my iPhone has been steadily growing since I first installed it. The last time I checked it was just over 300MB, nowhere close to your 10+ GB.

A few weeks ago, I got curious about what data it is squirrelling away, so I took a look using iMazing (a commercial iDevice backup and mgmt tool). Screenshot of the Wyze app’s file structure below. As you can see, there’s at least one MP4 movie. I’ve not gone digging into the various folders to see what’s hiding in there. If you want to reclaim the 10GB, I concur with Wellcraft’s advice: remove the app and set it up again. 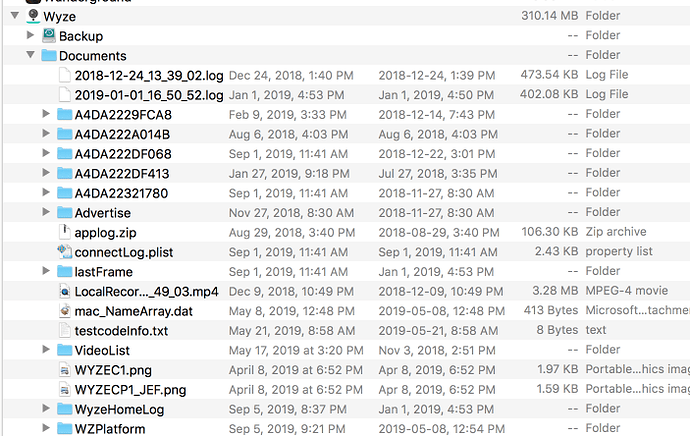 Thanks very much, Wellcraft19 - I just didn’t know if I somehow needed the Documents & Data data, but I apparently did not. I deleted the Wyze app and then watched my available internal iPhone storage ramp up in several seconds. I then reinstalled the Wyze app, logged in, and the cameras show up as before, and the events and playback on SD cards are still there. Anyone know the purpose of the cache build-up in Documents & Data in the first place? Seems there would be a simpler way to clear it, or perhaps there should be a means to prevent it from building up in base case.

Anyone know the purpose of the cache build-up in Documents & Data in the first place?

Although I’m on Android I’ve seen this problem before. Most of Wyze seems to focus on everyone have 64 GB on the device.
Video files take up a lot of space and Wyze continues to change their directory structure one and a while and I find my 16GB phone filling up. Then I go on the hunt for where they stash new files.

On Android I see 6 to 7 GB in site storage occasionally but this is due to using this forum. Luckily it is easy to delete.

I haven’t seen any storage issues with the Wyze app.

@Wmson, normally the reason for “caching” data is to speed up apps and not have to download “common” content all the time. Web sites works the same way - and as you know there can be a lot of “crud” cached up over time. Web browsers need to have their cache cleaned out now and then to ensure a PC remains reasonably speedy.

On mobile apps, it is often even more important to “cache” information as the pipe to download information off the internet is not as fast/unlimited. In case of the Wyze app though, really no reason to “cache” a lot of data as we expect to get fresh content every time we access a camera.

And as I said before, app developers often gets sloppy when it comes to memory management (or have directives from design to cache information in order to have apps appear to be speedy). If only for one app, really does not matter that much, but when every app out of maybe 100 apps “cache” 500 MB each, “sloppy memory management” has a real and severe impact on usability.

Yes, they all are youngsters and never had to live with the likes of the Commodore 64.

they all are youngsters and never had to live with the likes of the Commodore 64.

I’m guessing you are also referring to the ones who will never know the joy of a tape drive?

I still have my Commadore 64

I have 5 Wyze cameras, 4 Wyze bulbs, 2 Wyze plugs and my iPhone app is only using 210 MB of data. So, not sure why your phone is using so much?

Are you accessing the forum from your phone?

even if he is accessing the forums, I do I’m both browser on my phone and the app on my phone and between those two uses and the usage of 13 different cameras I’m not getting anywhere near that kind of storage use. It is odd it’s that high. unless of course my phone has some sort of automatic cache delete system and his doesn’t. That’s the only thing I can think of as to why it would hold so much stuff. 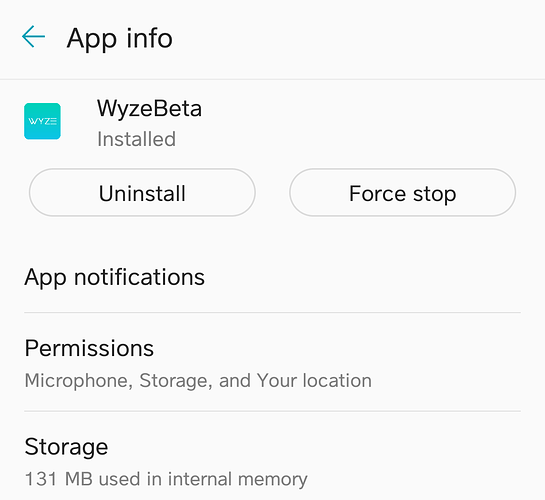 FWIW, Wyze has always been pretty good about memory usage and caching of data,

BUT they make mistakes.

What the heck is the "WyzePlatformKit" ? Directory Cameras

That darn directory took up 17+ GB of my Amazon Fire 10 device, and is sucking up 300 MB on my Samsung J3. It WAS full of log files, looked like 1 per day, but some were huge. WYZE – PLEASE PUBLISH THE DIRECTORY STRUCTURE /edit - and the huge ones were recent

Happily they usually correct them,
We just have to constantly monitor space usage.
For instance, I just created a timelapse file. It downloaded and created a “record.h264” size 209.89 MB before creating the Time_Lapse_by_Wyze.mp4 file size 289.85 MB.

I have frequently requested a directory structure map of Wyze, but it has not happened.

Newshound - thank you for the idea, but no, I’m not accessing this forum from my phone. I access the forum from PC. FYI - it’s been about 5 days since I deleted and reinstalled the Wyze app, and Documents & Data cache shows only 14 MB on my iPhone.

Oh you kids don’t know how easy you had it with your fancy-pants Commodore 64’s! When I was young, all we had to play with was the Commodore VIC-20, with a cassette-tape recorder as the only storage device. If you were lucky, you subscribed to a magazine that printed PROGRAMs (an app was just an ape with a typo) that you had to re-type line by line (with no typos). We also had to walk 10 miles each way to school in a blizzard - and it was uphill in both directions!

You reminded me of my Timex Sinclair with 16K memory module and tape player. Times were so much simpler then, but also slower.