Wyze bulbs are not responding to rules

I have deleted my schedule rules and re-scheduled them, I’ve re-set the bulbs with my wi-fi, I can control the bulbs from my phone app but the schedule on/ off just won’t respond correctly. Any current solutions?

Can you post a picture of the rules with all the actions shown? What does your rules history show for when the rules should of triggered? Can you provide a screen shot of that as well? Did you redo the rules after you reset up the bulbs just to rule that process out?
Thanks in advance!

There is currently no solution, there never was a solution, there never will be a solution. The wyze non color bulb is not something wyze cares to fix. I’ve been dealing with the bs with wyze on the bulbs for as long as I’ve owned them. I’m currently looking at 2 bulbs that are not on correctly for this hour, that I had to manually turn on last evening because they weren’t turned on automatically. So much for that big blah blah blah hooray we’re millionaires now video they released a couple of weeks back. Such a disappointing company. It just sucks I’ve got so much invested in their products or I’d move on.

I changed the rules last night to 5 minutes BEFORE the exact hour as I read a thread that THIS was an issue. I have the lights set to go on at 6:55 pm and go off at 11:55 pm. Normally it was set to 7:00 pm and midnight. Last night was the first time in quite a while that they worked properly. I’ll keep you posted. Prior to this, yes I reset the bulbs and then set the rules to the exact hour. I also deleted all the rules and re-set them but nothing worked. I’m hoping the offset hour rules is actually the fix.

Have (4) bulbs for over a year now. They work perfect as long as I turn them on and off manually. If I try to use them with a rule, they are not reliable. I’ve also offset the hour, still not reliable. So far I’m not real impressed with the bulbs. Sorry to say I would not recommend these bulbs to anyone.

Well the offset hours change did NOT work and the bulbs activated one light and the other stayed dark. I manually activated the dark one and when the rules deactivated the lights only one went dark the other one had to be manually shut off. These bulbs are very frustrating. They work great manually and under the OLD schedule system worked great but now under the NEW rules, they just don’t respond properly.

If you click on “account” in the lower right of the app, then scroll down about 2/3 of the way you’ll see “rules history”.

Ok, I found it. I sent you 5 days worth but they all say “successful” although the bedroom and living room plugs work fine, the garage and front door light do not. Sometimes one of the two bulbs activate and the same goes for deactivating. They NEVER activate together properly or deactivate properly.

Have you tried the trick of setting up separate rules for turning the bulbs on and turning them off? I was suddenly seeing inconsistent on/off with my “original” bulbs. Then I saw the suggestion (maybe in a different thread) to create a Turn On rule and a Turn Off rule for each bulb. So for three bulbs I have a total of six rules; two for each bulb. They have been working fine since I did that.

Yes, I have had it set up like that since I installed them

Gotcha thanks. Now I know what’s going on. I was hoping you would of included all the actions in the screen shot from a few days ago so this could of been ironed out then. Here is my visual aid that you will refer to below: 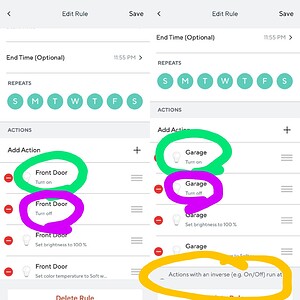 Have you tried the trick of setting up separate rules for turning the bulbs on and turning them off?

Yes, I have had it set up like that since I installed them

@dangmacguy means a whole new rule, one for on and one for off, not adding the on and off action to the same rule.

So I would for you remove the “turn off” action, and watch things work. Are there any more actions in the rule at the bottom? What else does that notation “actions with an inverse…” state? 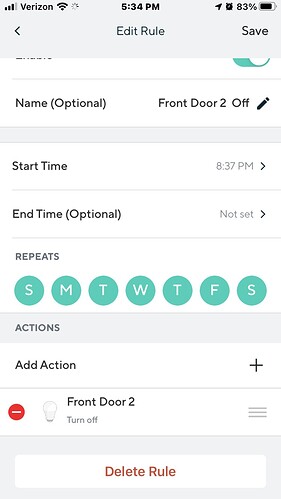 Yep! and then a similar whole separate rule with a “turn on” action scheduled to trigger when the user would want the bulb to turn on.

Possible but lengthy solution. I’ve been watching the logs of the scheduled events and what I was seeing mostly, not always, was that things like bulb temp or brightness was going off before the actual light was turned on. In my opinion this is a software issue that needs to be addressed by prioritizing commands. I.e. on first, then brightness, then temperature or color. I’ve experimented with setting a schedule as follows

This time consuming [Mod Edit] scheduling seems to work. Literally a different rule for every operation 1 minute apart so these [Mod Edit] bulbs don’t get confused and changing brightness before the bulb is even on… This light went from never being right to 2 days of perfect. I have added another bulb with this same scheduling to try it again. This bulb consistently didn’t even turn on at all so we’ll see. Fingers crossed. Ok the second light worked flawlessly last night following these same lengthy rules.