The bulb has a nice fade-in/out effect when it’s first powered on but has not been added to Wyze yet, or when you cycle the power to it 3 times causing a factory reset. Can we be provided a way to trigger that effect? I only make this suggestion because it’s already been programmed with this capability.

just saw your comment/post! im not only one! i created my own post, waiting for post to be approved

i hope it comes up and when it does, please check my post and vote for me!

I also would like a way to flash a light or plug.

Please Wyze, It would be great to blink or flash a light or plug.

Seeing as this was brought up in another thread today, I got to thinking, could this be a simple firmware update to make it able to flash? Then once that is a thing, adding flash/blink to the rules selection menu to the app, should be simple, I would hope.

Adding an option for bulbs to blink/strobe when the Wyze Home Monitor System is activated would be hugely beneficial for the Wyze community as a whole, but also as some have suggested, an absolute necessity for the hearing impaired community. I would extend that option to Wyze switches and plugs so that it could be selected for those that control lights.

Hi everyone! Thank you for requesting this feature… wanted to let you know we are working on it! One question for you all… How would you expect this feature to work? Do you need to be able to set the duration of the blinking? Would you expect to select the color or color-temperature it blinks?

The quickest way for us to implement is to have it blink a fixed number of times (currently thinking of 5 times) at a fixed color temperature. However if there is a strong need to be able to change the duration or colors please let me know!

Hi WyzeMike,
My hope would be that the color-temperature stays the same as it was already set to. The brightness would go 100% for 1/2 second, then 0% for 1/2 second for a configurable number of times.

And after the strobing, the light would return to the previous brightness.
Thanks!
Dm

Thanks for the feedback? Do you mind sharing how you’d use this feature? And curious do you only have White bulbs? Or do you own any Wyze bulb Color?

thanks for looking into this…I would opt for the color…as a deaf person, I prefer knowing the source of the trigger…front doorbell=yellow, rear doorbell=green for example…the key is to make this a toggle…that it reverts back to its original state, if off back to off, if dim, back to dim

Thanks pbravin! I agree 100% that the lights will need to go back to the previous state once the ‘blinking’ action is complete. Appreciate your feedback!

I only use or need white bulb flashing. Notification for deaf person or remote notification like if someone occupies an area a light would then flash elsewhere, or a buzzer would sound intermittently, for security reasons. basically to on-off-on-off to a plug or bulb If an event happened is my use. A light could be made to flash if low or high temperatures were sensed by a network device.

there are also many ways to do it…rather than please everyone at the first turn, lets do it in nibbles as an enhancement down the road

And most important… tied to Rules (Shortcut, Schedule, Trigger, Location), AI types and ability to apply to Bulb groups. If you don’t tie this feature to Rules, we’d have to manually turn the feature on/off, which would make this feature more of a gimmick than a smart-home innovation.

I’d use this feature primarily to grab my attention to an AI-type of interest when my hearing is overwhelmed with noise (machinery, music, etc.), need to respond to sensor threshold (leak, climate, entry, motion), as a security deterrent, 1st responder alert and drive the wife crazy. I’d love to see selectable flash frequency and flash/pulse duration, but 1 Hz/0.2 second is a good starting point as that is similar to ADA compliance and fire codes.

I was one of the original requesters for this feature. I had a few applications for this option. My goals would be the following:

These could be done with a white or color bulb.

I’m late to this party but I would gladly take a simple implementation of 5 blinks at a fixed color temp if that could be released quickly. I think this would cover the vast majority of use cases.

If that could be implemented in a way so the backend was present for more advanced settings once a UI was developed that would be fantastic.

i.e. Release a simple UI for triggering 5 blinks at color setting/color temp of X and then return to pre-blink state but build it so the variables below could be set by the user in the future after a UI can be developed and tested.

Then with that framework Wyze can give us some simple presets initially (even just one) and then release quickly. Fingers crossed!

Example of a 5 blink preset sequence:

I think the future proofing would be really worthwhile. You probably figured all of this out already so I’m hoping to emphasize, with my contribution, the idea that we don’t need a full implementation to enjoy a blink feature right now. (and… I realized a little too late this is tagged ‘testing’ so it’s probably already built! lol. sorry)

I love the idea of triggering it by sensors, especially for people with hearing issues.

Selfishly, my wife and I would just like to have our own disco party while listening to music. No time limit just a gradient random come change our stove effect until I told it to change to it’s normal (or any other color).

Hello Mike,
I’ve never browsed the ‘RoadMap’ until yesterday. Glad to see the ‘Blink’ Feature is being worked on.

In my case, I have four Wyze Color Lights in a ceiling fan that is located centrally in the house where I can see it from most rooms. 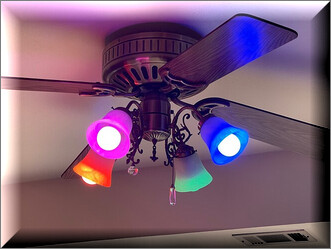 Garage Door open greater than 5 Mins (detected by Wyze Entry Sensor): all 4 Wyze Color Lights in the Ceiling Fan turn on 100% Red, Both Strip Lights On to Red, and Wyze Plug v2 turns on Headboard light in the Bedroom.

That’s one example where Flashing lights would be my preference. I’d leave them on until dismissed by me from Alexa: (Alexa: Turn off all Blinking Lights or something along those lines) Or set to turn off after 5 minutes, or turn off when garage door is closed.

All four Ceiling Fan lights turn off after 45 seconds by Wyze Rules once turned on (these lights never get used as normal lights, only for notifications)

The Ceiling Fan ‘cluster’ lights are also used in rules to alert me of "Pet detected’ or “Person Detected” on any of my V3’s or WCO’s placed outside the house, for example: If a V3 or WCO in the back yard detects a Pet, the South Light turns on to Green (goes off 45 seconds later). If a Person is detected, that same light turns on to Red, and then off in 45 seconds)

When I see the South Light turn Green, followed by the East light turning Green, I know which direction the resident wildlife is headed (Coyotes, Possum, Raccoons, Rats & Mice, etc)

The Wyze Video Doorbell turns on the South light when it detects a person or package (off 45 seconds later.

Mailbox on the street, has a Wyze Motion Sensor in it: Open the mailbox door, motion sensed. the Fan Cluster lights all turn on to yellow, and off 45 seconds later. (Alexa says “You’ve Got Mail” at the same time.

I’ve other rules that make use of the Cluster of lights. For some of my rules, it would be best for them to Flash any of my Wyze Color Lights, Strip Lights, or lights connected to my Wyze Plugs.

I’m sure there are many other ways the flashing lights could be utilized.

The best way I’ve found to flash lights (and do all most anything else) is to use Home Assistant and Zigbee devices. No monthly subscriptions, works without Internet, and is free open source. It can even run as a virtual machine. I’ve been using it for about 6 months, and now I’m giving away all my Wyze devices.

A post was merged into an existing topic: Add More Actions for Wyze Rules