I’m talking about the cancel/select all option scrolling off after you hit the pencil…@newshound confirmed it does not scroll off on iOS . It scrolls off on Android. Therefore, I believe that’s an Android bug.

The calendar and edit menu scrolling off before you hit the pencil icon is probably a design change that made it inconvenient. Yeah I do remember reading that you reported this issue.

They are the same problem.
That area of the screen should be static at all times no matter which menu is showing, calendar or edit.

Yeah I agree, but at least on iOS the select all/cancel is static after clicking the pencil icon. It should be consistent on both platforms.

Yes it should be but the two platforms don’'t share code so it probably just got overlooked, I hope.

Hopefully my reported issue doesn’t cause them to make the cancel/select all menu scroll off on iOS too haha.

A half-cocked observation : Tablet in Landscape, swiping from Event to Event, each takes significantly longer to load than v.2.10.36 (that I have loaded on a virtually identical tablet in close proximity.) Also, the “This clip doesn’t exist in the cloud” error message seems to come up more often. That said, I repeat, “half-cocked.”

Not half-cocked! Open the frizzen and prime that pan!

What I have noticed on at least two phones ( Android 6 and 9 ) in that when I swipe through events, the swiping works fine forwards & backwards, UNTIL I try to swipe backward over an hour boundary.

Then I get what you see below. A “Loading” screen followed shortly by the “clip doesn’t exist” screen.

But it always says “Motion at 7:00 PM” no matter what hour boundary I am trying to cross.

And there is no missing clip - I can load & view every one in the events list, I just cannot swipe across hour boundaries.

Not a fatal flaw, but definitely something weird going on…

I am not experiencing this on iOS. 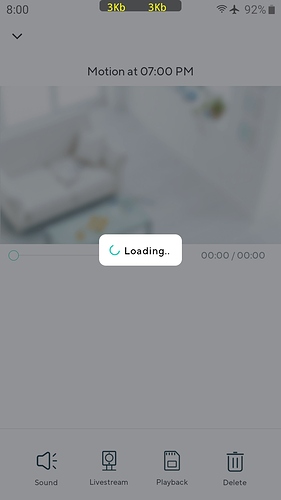 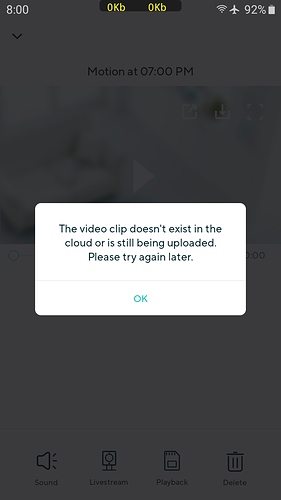 Yeah I was able to replicate what you just posted as well on Android 10. Please report this issue when you have time. That’s very odd. Mine shows up motion at 6:00 p.m. when I try to swipe events past the hour mark. I’ll report it as well.

I get the same on Android 9. Motion at 8:00 PM. Different time zones maybe?

What I have noticed on at least two phones ( Android 6 and 9 ) in that when I swipe through events, the swiping works fine forwards & backwards, UNTIL I try to swipe backward over an hour boundary.

Thanks! We’ll see what happens!

I reported it to Wyze as @cheaplikeafox suggested and JonathanP of Wyze replied very quickly to say they had engineers working on it and hoped to fix the issue in a future release. He also requested log files, so I sent them in from the two devices. As computer updaters the world over say… “and now we wait…”

Good theory @angus.black - I’m currently on EDT. The Wyze app does sometimes seem funny about time. Running it inside MEmu with the “fake location” feature turned on really messes with it.

I hope to be taller and more handsome by then. Taller, handsomer, swiping smoothly through events. :shudder: I think I just “arrived.”

I am in the Atlantic time zone, 1 hour later that you.

in the Atlantic time zone

So if @cheaplikeafox is on Central time, then the theory holds, and, ignoring daylight time, we would each be getting a time equal to midnight GMT. Which seems like something a computer program would do…

A lot of people on iOS have been having issues loading the camera live-streams.

Allow me to clarify … in the post above I was referring to rapidly moving through 12-second clips by swiping forward or backward while viewing an Event. Has this functionality been removed?

Still works in Android, but…

No longer works on my iPad. After selecting the Events tab and viewing one of the saved 12-second clips, I must now return to the list of events in order to select the next/previous one, versus just swiping forward/backward while viewing. Any other iOS/iPadOS users out there experiencing this?

Any other iOS/iPadOS users out there experiencing this?

Thanks for testing. On my iPad, it simply no longer works, within the same day or otherwise. My wife has an iPhone so I’ll have her test on iOS. Who knows, maybe the iPadOS build behaves differently.

Edit: swiping between event clips works fine on my wife’s iPhone and is now working on my iPad as well, after restarting one misbehaving camera. Doesn’t make complete sense, but seems to be working nonetheless.

Is there an option to go BACK to the old way of viewing events? This updated version makes it much more time consuming for viewing events. You have to actually click to open the video in order to SEE anything. The images are too small on a phone so no longer makes it possible to just glance at them to see if any events need to be opened to view.
We have four cameras, pay monthly for the “longer than 12 second” event record which took away person detection which at least the old viewing main page images were large enough to SEE a person. PLEASE go back to the way it was or at least allow US to choose how we want our events screen to appear.

So you all talking about the person detection that means you do not have/pay for the Complete Motion Capture and are you fine with the 12 second record then pause of (I forget how long) before it records again?

It’s not a choice.
Person Detection doesn’t work with Complete Motion Capture.
The cool down time is 5 minutes.