[Mod Edit]: Title and request text edited to enhance search clarity and to conform to the Community Guidelines.

The new switch mystifies me. Major legitimate competitors are putting out fully dimming, fully 3 way capable switches for less money. I expected more for their first smart wall switch than a clicky button.

Curious where your finding a 3way, dimmer smart switch for less than $11.00 per?
I have several of the Lutron 3way dimmer smart switches and there $60.00 a piece.
You also can not use dimmable smart bulbs with them. So I’d prefer no dimming opinion but either 3way added or similar to Lutron just add a pairable remote that can either be used as 2nd option wherever or to replace a 2,3, or 4 switch.

I hate that this product voting starts at zero, just today. This should have been included in the “switch” product request voting (not that voting works the way it should anyway). I guess people assumed Wyze would at least release a 3-way in addition to the normal switch they got now.

I posted about it a few times and didn’t want to be rude to Wyze, but I was thinking of the Feit 3 way dimmers that have been on sale at Costco in 2 packs and 3 packs for about $11 per switch (and no, not just slave switches). They are similar to the $50-$60 Levitons I have been using until now.

Looks as if the sale ended and they’re up to $15 a piece including shipping. (I bought at a local warehouse.)

I’ve never heard of these but they got me questioning my loyalty being half of my light switches in my house are 3ways. Do you know if they work with Smart wifi dimmable bulbs? My Phillips WIZ wifi bulbs do know like my Lutron switches at all. I have like 40 of there bulbs in my house, basically everything that doesn’t have a Lutron switch on them.

Feit’s an established brand but I don’t know the answer to your question. (I doubt it - smart bulbs usually need full power to operate at all.)

Same here. Costco has 3-way smart switches between $11-15 (depending on sales) per switch. I was hoping the next Wyze switch would at least be similar in cost, but since they’re single-pole only, and about $15 per switch (after shipping), it’s not worth replacing what I have

I also don’t see any appeal in a single clicky button, for me. A lifetime of up/down for on/off is a stubborn thing (and also just better

I’m sure Wyze will eventually cover the dimmer / 3 way / fan control needs. Just kinda assumed that would be now.

My house is old and doesn’t have a neutral. I need something like the Philips Hue Switch Module. I am days away from “switching” to Hue because of that. The Wyze smart hub are continuously switched off by my kids and they become useless.

Anyone in the same boat?

Someone mentioned GE and these sound a LOT better than Hue. No neutral AND no hub required. 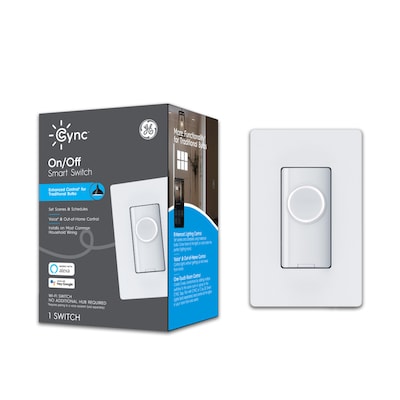 Wait, how that works with Wyze bulbs? And why someone would prefer to have GE apps over Philips Hue that is Apple HomeKit integrated?

That’s not even to consider.

It would work with Wyze bulbs as it would with any other LED bulb, turning it on or off. Personally I love smart wall switches because I DON’T have to use a smart bulb with them. And not everyone gives a hoot about Apple compatibility. The Hue system seems outdated as a whole.

Until they got hacked. Don’t put that garbage in your network, and check the wyze roadmap, you’ll see how important the HomeKit is.

Sorry, who is it that got hacked? Which is "garbage*? Seriously asking what you meant.

Anyway as I said I have no interest in becoming an Apple centric household so HomeKit has no appeal at all. Home Assistant on the other hand, is where the action is.

GE is garbage. I understand you have no interest in HomeKit, but there is a world out there, and most of us want to be safe, especially in our house. Search for IoT hacking, it will open up a world.

One of the most often hacked IoT devices is the one we expose directly to the internet; the router.

Yes, when most people hear IoT they think smart switches, plugs, cameras, etc. but security professionals classify routers as IoT devices, and thus they are included in reports and statistics regarding hacked devices.

At least with smart plugs, etc., one has the option of putting them on a seperate network from their computers, tablets, etc…

The GE switches won’t work with Wyze Bulbs, they are garbage considering the reviews and plus they turn on/off the circuit of your bulbs, they can transform regular bulbs in smart and smart bulb in regular.

Not difficult to understand.

While the Philips approach will leave the circuit always on making your smart bulbs always available through the app plus at any changes of status on the switch will turn the assigned Bulbs on/off.

This is true, but they are not exposed by default, and there is almost no reason to do so. Modern routers/mesh system have a better security.