Will a standard DECORA face plate fit the WYZE switch?

Most of my DECORA switches in my house are dual, triple, or quad decora faceplates. In watching the Wyze switch video and looking at the profile pictures, I’m not sure if the switch protrudes out further than a normal DECORA switch. I may be wrong. All of my decora switches in the house are made by Leviton or Lutron. Faceplate thickness is about 5mm.

They seem a little deep and it depends on the plate. Some have found it a problem. Search the forum for "decora*.

Also, while they are pricey I have been happy with my Leviton smart dimmer switches.

Welcome to the forum @wkurihara

Read from here down. There are also some photos of how the Wyze switches look in the faceplates.

The fit is fine. Here’s a picture of a three gang. The plate is a little ill fitting itself because of the way the box was installed, but the wyze switches are still flush. 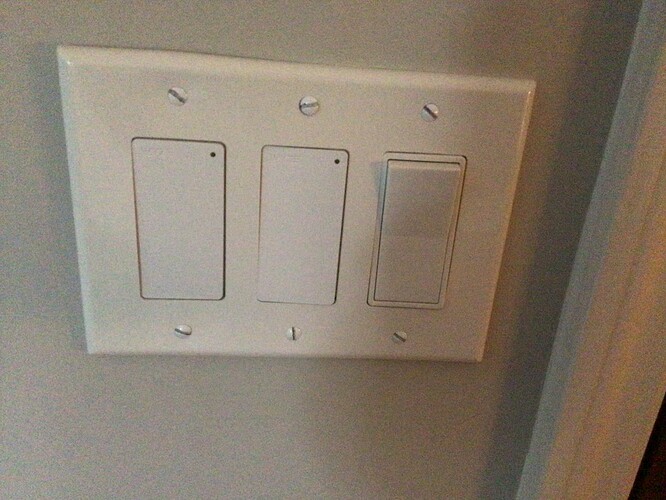 Kinda funny, right there in your picture there is a larger gap to the wall on the upper left side above where the Wyze switches are.

It’s not just about the plate being flush with the switch; it’s about whether the depth pushes the whole plate away from the wall.

Just going by what I’ve read but mileage seems to vary.

Thanks for the picture. I do see that there is difference in how far out the Wyze switch protrudes outwards as compared to most Decora light switches. It’s something that I think I can deal with using some cushioning material or foam to fill any gaps between the faceplate and the wall. I think the difference that I have to account for is probably on the order of 1-3mm. I suppose I could also just use some white caulk filler and paint over it to hide any exposed gaps between the decora plate and the wall.

Some switch plates are a little deeper when you get the Large or Jumbo plates. I have done this in the past which seemed to work for me. I ultimately used the one which came with the switch as I only had one switch in the room.

Yeah, I did mention the ill fitting plate due to the way the box was installed. It was like that with the standard decora switches.

As I mentioned in the reply, that’s down to the way the box was installed. To be more clear, it looked that way with the standard decora switches and is not due to the WiFi switches.