Where do I change the "Recording Type" to Video?

I am rather confused about how to get my Wyze Cam v3 working properly. 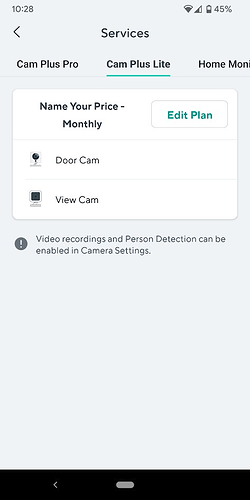 Anyone able to help?

I spent over a half-hour trying to figure out how to replicate this error, but it wasn’t happening to me in any of the variations I tried. It could be that I am using a different app version.

Make sure your firmware is up to day and you have the latest app version. Assuming that you indeed have the cam added to cam plus lite already, I would consider removing it temporarily, clear the cache, reboot your phone, reboot the camera, load the app back up, add the camera back to cam plus lite, go back to the home tab, select the camera, wait until the livestream shows (this makes sure it is indeed connected), then select settings and make sure Detect Motion is selected, then select smart detection again and again try to enable person detection.

If you’re still having problems, contact Support, because that is strange.

Firmware and app are the latest I can obtain.

I don’t have the option to remove the camera.

I’ve gone through numerous troubleshooting steps with Wyze Support. But they haven’t gotten back to me for a while now after I sent them my logs.

Was hoping someone may have experienced the same and resolved it some how.

I’m with @carverofchoice on this and confirming his findings. I pushed one of my V3 cams over to CPL and also couldn’t duplicate that message in any settings combination scenario.

If I recall correctly, the option for choosing thumbnail or 12s video in CPL was previously removed and defaulted to 12s video to alleviate confusion with no subscription thumbnails. Not sure if that change came thru app update, FW update, cloud update, or a combination of the 3.

It is indeed strange.

Here is a post by WyzeNoopur indicating that CPL will get all 12 second videos by default now. However, I would make sure you are running the latest App and Firmware as well.

I don’t have the option to remove the camera.

If you want to remove the camera and re-install it, tap the pencil thing on the top right of the main page. Then tap Edit Devices. Then tap on the red circle. Now you should see the option to delete the camera.

Gosh… this did it. Thank you. Removing the camera from the app and re-adding it got the v3 working as intended.

When troubleshooting with Wyze Support, they never suggested to do this. Can’t believe I didn’t think of it either. They were very detailed with instructions on how to remove the cam from CPL, but I never found the option for that…

Yes. Your CamPlus Lite subscription in your Services Tab is for as many eligible cams as you want to add. Even if you have to delete and reinstall a cam, you should be able to assign it back to CPL. If you don’t delete it and just do a new reinstall, it should retain it’s assignment to CPL and the previous cam settings.

Thanks! I’ve been paranoid about trying to fix the issues on two of my three cameras (might be three/four but one’s being borrowed at the moment) because I thought I would lose access to the camplus lite.