Okay, So I’m guessing this isn’t a Wyze hardware/software issue, but possibly some sort of interference problem that I haven’t been able to find.
However, I’m posting it here on the chance that someone may have experienced something similar and may have found solutions.

So the situation is that my new V3 Pro will not stream in 2k, but only fails during main daytime hours. Early morning, evening, and all night it streams fine in 2K. During the bulk of the day, it just freezes or at best studders and jumps multiple seconds at a time like it has a very weak WiFi signal. Switching it to SD or 360P makes it run perfectly smooth, 2K starts improving late afternoon, and works perfectly by evening/night. It also doesn’t matter what device, it fails during the day on iPhone, iPad, and Android tablet.

I know, I know, the common answer would be weak network or range, but that isn’t it. even right near my Eeero Pro mesh it does this and I can stream 4k on multiple devices at once on my network. It also fails during the day if I bring it inside and try it in the same room as the main router.

I’m thinking it might be something causing interference that only effects the V3 Pro for some reason from a neighbor in the area, because nothing in my house runs during the day that doesn’t in the evening or early morning. In fact, I have more things running at night such as the TV which is all internet streaming, often in 4K and the V3 Pro works fine in 2k then.

As an experiment, I even temporarily turned off all of my other cameras, TV, computers, etc mid day when the camera wouldn’t stream in 2k and it didn’t solve it.

Also, the camera is sitting 10 feet from my ASUS access point.

I’m thinking the same as I was having similar issues with one of my v3 (non Pro) some time ago. Switching SSID channel from Auto to 6, fixed my issue.

I’ve been experiencing issues with live streaming since I got them and thought it was related to running iOS beta. However, the last two days I’ve noticed the same, evenings and nights stream fine but during the day it’s pretty much useless. Recordings to cloud and SD work fine. Same issue on both of my V3 Pros. Both cameras are within 10ft of the access point. No previous issues with V3s at same location.

Still struggling to think what other major change would be in effect during daylight hours, aside from that big transmitter in the sky.

Yeah, it makes no sense to me but it’s what I’ve come across the last two days, very odd. Just got around to testing on another iOS device not running beta and have the same issue so doesn’t appear to be related to that.

Live stream is almost completely unusable during the day but both work just fine at night.

Unfortunately, As much as I love the Eero and how rock solid it is, there’s no way to manually change channels.

Yes, exactly as I was describing, right down the same location as the V3. Now that I see similar reports, I’m wondering if there’s is something going on with the pro hardware/software. Sorry you’re having the issue, but glad you report similar which means my situation isn’t unique and maybe a firmware update could fix it.

Good points. A 3rd difference would be firmware as well which is a lot different since it requires an app change and different options and interface.

Some kind of photo resistor that enables the spotlight at night? Grasping at straws here.

So far with less than 24 hours of this thread it’s just 3 people including myself with this particular issue. That would lead me to believe that it isn’t a widespread issue, but still something related to the V3 Pro.

There were some other threads with people stating they couldn’t stream in 2K, but could in HD/360P, but they didn’t mention time of day as a problem. That could either be they just didn’t notice a difference at night vs day or it’s a range/network problem in their case .

I don’t see a common denominator yet such as router type. Maybe once the V3 Pro is in use by more people, something will turn up.

Stream hasn’t worked all day or barely worked and now (evening) it is working perfectly. I’ll continue to monitor but it worked all night the last two nights. Stops working some time in the morning, very odd to say the least.

Hey guys, it could be something as elemental as this - the specs say it’s designed to use a 33% higher frames per second during whatever it considers “daytime”! 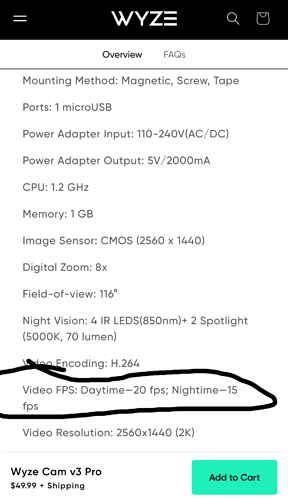 Good find! That’s the first thing I’ve seen related to time of day. Although 20 fps shouldn’t be any issue for even moderate WiFi, at least that reference points to something that corresponds to the problem.

Good point but isn’t that same frame rate as the regular V3?

I can only guess that the frame rate changes depending on night vision being on or off. As a test, my pro which being nighttime right now is streaming perfectly in 2k, I turned off night vision to get color view and it’s still streaming fine in 2K. Tomorrow during the day, I can try forcing night vision on as another test, but it doesn’t seem to make a difference right now.

Yes but… This is 20 fps at the much higher 2K resolution, so more data and more compression.

That said, my own cheap non-Wyze 2K cameras seem to have no trouble streaming all day and night.

So, as another test with the FPS theory, today, like clockwork, the camera stopped streaming in 2k during daytime hours, but streams perfectly fine in SD. I forced night vision to on which should have reduced the FPS if that’s how it’s triggered, but the camera still froze live streaming 2k and worked perfectly on SD. That would lead me to believe it isn’t the 15fps/20fps difference unless that is triggered by something else other than night vision.

Back to the drawing board!

I have the same thing going on?