These cameras are outdoors, albeit in semi-sheltered locations (covered lanai, under an eave, etc). Not sure that v3 would be ok to use outdoors

My mistake. Not livestream. The “view playback” button is not available in the app with the WCO when viewing live

Not sure that v3 would be ok to use outdoors

I currently have five v3 cams outside and they work far better than the WCO. The v3 cams are designed for outdoor use.

Indoor and Outdoor Use

IP65-rated weatherproof with extreme temperature tolerance from -4°F to 113ºF, the camera can be mounted anywhere inside or outside your home and stand up to any weather conditions.

]). The only reason if suggest a wco over a v3 in a corded location is if the pir sensor is a MUST, vs the pixel detection system on the v3.

Can I use Wyze Cam v3 outdoors?

Yes! The v3 is an indoor/outdoor camera.  Wyze Cam v3 is weather-resistant, rated IP65, and can be used both indoors and outdoors. It is not wireless, however, and must be connected to a power ou...

Thanks for the comment! I’ll emphasize a few lines in that link:

Please note: The power adapter included with the v3 is NOT weather resistant, so if you plan to use it outside you will either need to run the power from inside or purchase a weather-resistant adapter.

Very important, the included Wyze power brick with the v3 is not outdoor rated and not to be used outdoors. Just the camera end of the cord is outdoor rated.

Good to know. I will probably switch to v3 with outside cam updates. The v3 cams seem to be more stable with connections too. I constantly need to reinstall my WCOs. About once/month they go offline and won’t reconnect without a restart. V3 cams have never had this issue.

Annoying when it happens when I am out of town since I can’t remotely press the reset button!

V3’s work SO much better outside if you have access to power cable for them, and especially if you have everything including the powercord in a semi-sheltered location like under an eave as you mentioned (which you must already have since you have power cords running to the WCO’s already, then the V3 is definitely the way to go. It will totally solve your Webview issue! You’ll be able to use webview for those locations!

The WCO’s will still be useful to place elsewhere in more difficult locations even if you switch out those current locations for V3’s.

Then I wonder what the advantage is for the WCO other than the cordless battery (which I don’t use!)? I run the power cable through the exterior wall and plug the adaptor in an indoor outlet, in all cases but one. That one is plugged into an outdoor GFCI plug in a weatherproof junction box, outside of direct rain exposure.

I wonder what the advantage is for the WCO

I get why the WCO is not everyone’s favorite (it’s my least preferred cam too), but to be fair, WCO’s are AWESOME for particular use-cases:

In almost all other situations a V3 is better most of the time.

I have 8 WCO’s, and use them like trail cams around my property mainly to observe the wildlife that frequents the property. I do have one in the front yard ‘hidden’ and pointed at my front door to backup my video doorbell.

I do not have a power outlet available at the locations I use them.

So, losing my 8 WOCs in Webview is unacceptable.

The excuse that it’ll run down battery is a poor excuse. Let me the user of the camera check a little check box to ACKNOWLEDGE that this may impact battery life of the WCO camera if added to the Webview. Then, when it starts consuming the battery entirely too fast, then that is something I make the decision to no longer utilize.

When viewing the live stream on my iPhone, iPad, or android phone, the WCO will time out to prevent battery drain, does it not? Why can’t the same thing occur with the webview?

You make some great rationales!

Though I personally wouldn’t say I am “losing webview” on my WOC’s because they’ve never had webview, so I don’t see it as something being taken away from me (can’t take away what I never had). I rather see it as me being excited that I am getting something EXTRA on all the other cams, and for me it feels like a totally free extra because I already had Cam Plus on everything, and they didn’t raise the price for me to get this added to it, so from my perspective I am just excited I got a bunch of new extra stuff on most of my cams at no additional cost from what I had before. ​But I guess that’s just semantics.

I totally support all your rationales. It would be great if Wyze implemented those as solutions. Create a disclaimer or acknowledgment about the battery impact streaming will have, maybe even suggest not to do it too often or for too long on WCO’s, and secondly they could do similar to live streaming on the Wyze app and just have a set interval for the WCO’s to time out on the webview. Those are both pretty reasonable solutions. After all, like you mentioned, Wyze allows us to live stream WCO’s from our app, so how is this any different? Technically it’s routing through a different way than when we use the app, using an Amazon service for Webview, but the battery use issue is exactly the same, and we aren’t being restricted from live streaming in the app. This should be treated similarly (with a time-out interval if necessary). You make a very valid point, thank you for sharing.

I am definitely a big supporter of letting the customer make the informed decision rather than enforcing limitations (I also fought for this with the Wyze Watch settings limiting heart rate and SPO2 to force us to have better battery life, and a few other similar impositions, so I definitely support the principle of this).

I think that IF Wyze does eventually provide support for WCO’s, it most likely won’t be for several months after it’s officially launched. If enough people respectfully show their desire for this, they might do it eventually. If I see it in a wishlist I’ll vote for it, and I’ll try to remember to ask the AI team about it the next time they do an AMA on one of the platforms. It would be interesting to hear their responses and considerations related to your logical rationales.

Sorry if I missed it, but for the power outside there is also this now. 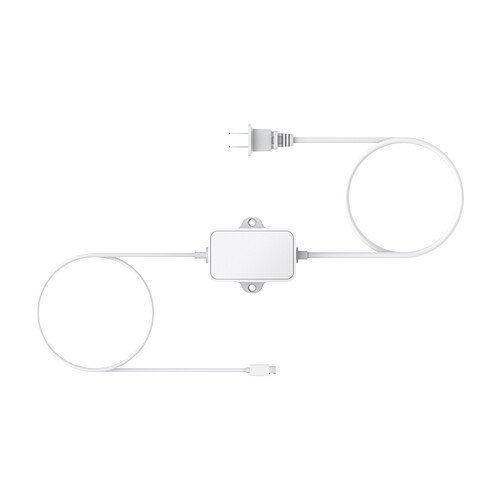 Ready for rain, snow, or shine. Only for Wyze Cam v3.

Yep that is an optional accessory when it is available. I was just thinking out loud about the included power brick.

Though I personally wouldn’t say I am “losing webview” on my WOC’s because they’ve never had webview, so I don’t see it as something being taken away from me (can’t take away what I never had).

I went back, and read my original message, and agree that was not a good choice of words.

I was expressing my frustration at seeing 8 placeholders for camera’s that I’m now being told will never see the light of day for live view.

I guess if I had one WCO in the view, it would of been a minor annoyance…

Interesting, SJ. Do you have any idea why they are spinning away for you like that? Does it only do that when you are on a separate network from the cams, or does it also do it while you are on the same network --it SHOULDN’T make a difference since either way it’s supposed to be routing through AWS, but I did read a couple of reports from people that they were only having that issue away from home, while others seem not to have the issue at all, so I am just trying to figure out why.

I am hoping that

Those would be great updates.

Do you have any idea why they are spinning away for you like that? Does it only do that when you are on a separate network from the cams, or does it also do it while you are on the same network --it SHOULDN’T make a difference since either way it’s supposed to be routing through AWS, but I did read a couple of reports from people that they were only having that issue away from home, while others seem not to have the issue at all, so I am just trying to figure out why.

I’m on the same network as the camera’s, and this is on a Dell Precision T5500 with 48 GB Ram on using Firebox. I tried it on Chrome earlier this week, with the same issue, today, just fired up chrome, got the single V2 I have to come up, clicked on the next supported camera, it came up after about 30 seconds of spinning… moved forward with the other supported camera’s (10 total) adn they are slowly appearing… with a short delay on each camera (10 to 40 seconds depending on the camera)

Just before I went to chrome on the PC, I launched Safari on my iPad Pro, and the first camera came up… so i attempted to open more camera’s and it forced closed Safari after about a minute of trying to pull a live feed.

understanding with this being in Beta, not sure what my ‘testing’ is providing to Wyze right now. But happily participating.

I put a couple on back fence just to show back yard and rear/side parts of house. I like the view and the battery life is fine at 2-3 months. If I do time lapse, that option does take battery life but I don’t do it often.

I have Eight WCO’s around the perimeter of my house, some hidden, some not, all at ground level for the most part, pointing at a slight up angle . All to capture wildlife, except one that faces the front door to backup the video doorbell camera.

I’m more than willing to accept the same ‘hit’ on my the battery life that occurs when I stream video to my iPhone and/or iPad, to be able to view a live feed in Webview.

That said, when I bring up Webview, there is Zero live streaming occurring until I click on the camera for the V2, V3s and Pam Cam V2s.

On my phone/tablet app, When I first open the app, I am presented with a list of camera’s and groups. It appears to me there is no live streaming occurring at first, until I either tap on a camera if it’s not in a group, or upon tapping on a group, if there are Non Battery Cameras in the group they start to live stream at that time.

So, It appears we have a different user experience between App and Webview for a few examples I have discovered.

(and, as a 'public service announcement, there are currently 518 customers that would like to see the Wyze App on iPads and Android Tablets work properly before Five years elapse on that wish list item, perhaps before Christmas 2023? @WyzeGwendolyn any chance we can get a commitment by Wyze on that target date?)