I’ve had 2 WCO’s since they came out. They are typically in the backyard recording wildlife. For the past few months I am lucky to see an animal as it gets right up to (and goes past the camera). Originally it would pick up movement many feet before the camera. The detection area is correct and sensitivity is set on far. Not sure if this happened after a firmware update, but honestly afraid to do another update after having my own issues with them, and reading other posts here.

Has anyone else seen this? Kind of useless to have a camera that doesn’t pick up motion until the subject is on top of the camera.

I’ve had the same 4 WCO since October 2020 and they are still recording in the same manner as when they were new. The cameras have the 4.17.4.124 firmware and I finally updated the base from 4.16.2.45 to 4.16.2.66 recently, no change in detection or recording. All my cams have cam plus lite and I an also doing scheduled event recording to the SD cars in the cams. People are still detected at approx.25 feet and my critter cam will still detect the cats, possum, skunk and raccoons at at least 23-24 feet. From the cam to the fence gate is 24 feet and the cam will detect all the critters mentioned above when they crawl under the gate all night long. The face of the cam is pointed in the direction of the red line. 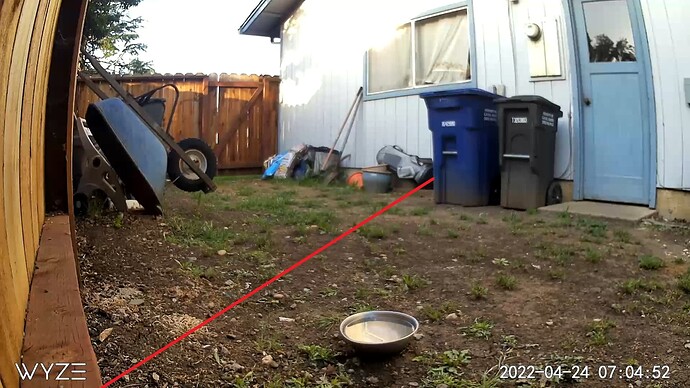 Thanks! I’m going to reboot everything and maybe adjust the angle a bit. The one that’s been on my deck has been in the same place since I got it, but obviously I move it when I recharge it, so maybe it doesn’t like an angle. I can see animals on the driveway camera but the deck camera is just triggering too late. It used to turn on when the animal was near the driveway and now it’s when the animal is just a foot from the camera.

I fully understand you about Gun shy on doing updates. I held my breath for 4 min when I last updated the base.

Ugh my base needs to be updated too. Dare I?!

I notice there was also an issue with .45 in January!

Hope everything stays working, did the WCOs too

There was an issue with.66 twice. I asked in the Beta forum and they said it was fixed so I added it. I would just stay on .45 until the next go around, it was a security update. 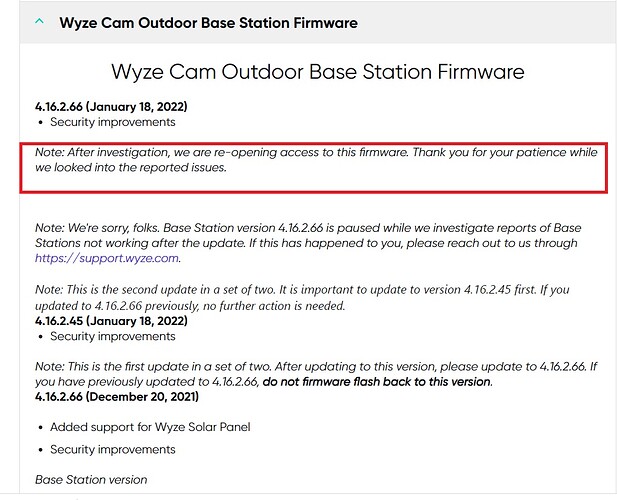 Yes, I think I’ll stay here for a bit. Let’s not rock the boat!

I’m with you on the slowness. Granted, I try to record birds at bird feeders - I usually don’t get their arrival, but if they’re on cam properly, I’ll get their departure…or flying out of the scene at least…still, I wish it was faster. Or at least, “here’s the first five seconds before motion was detected”…

I had a camera at a nest for a bit. It’s funny because I have to keep the feeders and waving branches out of the line of sight but yet when you want birds, you don’t get them.

Yesterday one of my WCOs picked me up as “person” and I showed up 10 seconds into the recording, from behind. Why it started recording so early is beyond me, since that’s the one I am complaining that it’s not picking up things quick enough.

I’m also seeing jerky/fast playbacks too, just not all the time like in that bad update. I continually remind myself these are “for entertainment purposes only”

Oops guess I can’t edit. I do think way back in the beginning you’d get a couple of seconds of earlier captures.