Can anyone tell me the purpose of the wire shunt?

I have a Ring and Wyze doorbell both wired to my existing doorbell and both work with their existing wire shunt placed in circuit with my existing house doorbell. I plan on eliminating the Ring (goes off line a lot and a pain to remove the cover to get it online again) and replacing it with another Wyze unit. I also would like to no longer have the wires connected to my house doorbell. So can I just connect all the wires together separating the power and front & back wiring or do I have to have the wire shunt in the circuit?

If you are going to bypass the existing transformer and chime completely, you will need a power supply that will provide the 16V-24V AC, ≥10VA direct to each.

Another option is the Wyze Video Doorbell Pro which can be wired to power or run on battery.

So it seems like whatever the case, that white wire/shunt needs to be in the circuit. What I can’t understand is if that wire which Wyze includes is so important, why not pre-install that into the doorbell circuit, ie, in the video doorbell itself?

It depends on your preference and inherent level of risk. Do you like to live on the edge?

The item to which you refer is most likely the inline fuse that comes with the kit (the one shown in the diagram above). It also comes with two pigtail extensions with terminal forks do attach to the bell terminals if you want them. Wyze doesn’t pre install it because it has to go into your existing wiring, which they can’t predict. You can put it anywhere between the bell and the power supply. If they installed it in the doorbell, you can’t replace it when it blows out… It would be like hiding the fuses in your car inside the engine block.

The purpose of this item is to fry out at that fuse point rather than at your electronic bits if a power surge comes from the power supply down the line.

Wyze is going to tell you that it will void the warranty if you don’t use it, but???

I don’t have a house bell. I bought a direct wire wall wart power supply and wired it direct. The three wirey bits are still in the box. My doorbell is well over a year old w\ no issues (knock on wood). 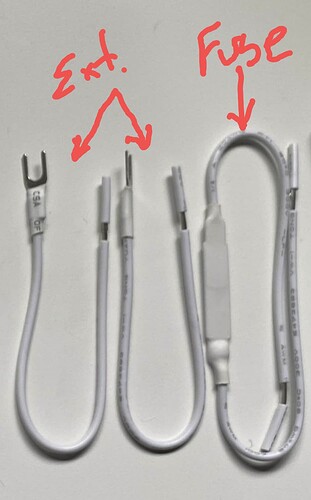 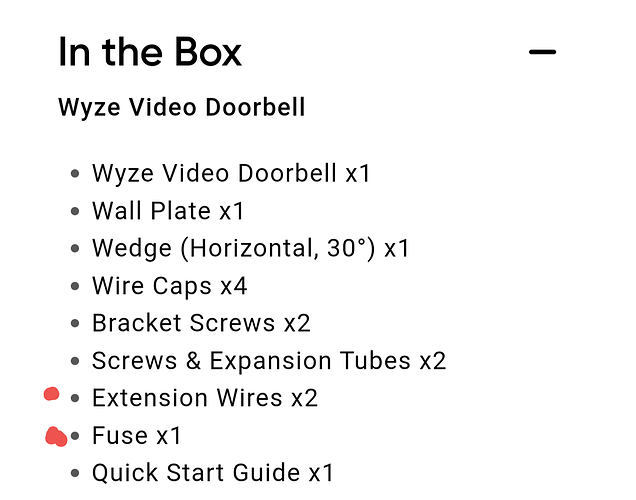