I have owned several robot vacuums beginning with the first generation of Roomba and one of the frustrations that I have encountered universally across all brands is the problem with the cliff sensor thinking that a dark rug or a dark pattern in a rug was a cliff since it absorbed the ir light instead of reflecting it. There needs to be a way to turn off cliff sensors for single story homes and/or a better solution which would be ‘safe areas’ in the mapping. The second choice would be more functional for most people but the first is also a good solution.

Many people have area rugs that can not get vacuumed by other brands of robot vacuum and I have made these same suggestions to irobot, neato and samsung. You could be the first to implement this and it could give you bragging rights to being the only robot vacuum to vacuum rugs without running away from them.

Mapping the home takes care of this issue. I have a Neato with laser mapping never had a single cliff issue. But the roomba on the other hand without mapping is a nightmare gets stuck all the time and cliff sensor error daily

noslenwerdna…the following has little to do w cliff sensors. It’s more general regarding these robotic vacuum cleaners. I thought you might be a good resource since you stated you’ve owned a few going all the way back to Roomba ver 1.0.

How efficient are they? I look at them and I think to myself that they would not be good for much more than picking up a handful of dust bunnies on bare wood floors and maybe getting a few cheap laughs by training your cat to ride around on it or using it to deliver drinks to a gathering of friends.

But you have the experience and so I’ll defer to your opinion and thoughts.

I have not found that to be the case. The only solution to the cliff sensor situation is to put tape over them so that they are defeated. The IR light does not reflect back from dark colored flooring, especially dark carpets and dark patterns in carpet. The robot vacuum thinks that this is a ‘cliff’ that should be avoided. I used to live in a house with a staircase in the middle of the upper floor and the mapping did not see the handrail as a wall but it did react to the hole in the floor in the middle of the room. Since that house, I now live in a single story house with no holes in the middle of the floor but with Persian rugs. These are seen as holes in the floor and are not ‘mapped’ as areas to avoid. They are just avoided once the vacuum gets to them and thinks it’s about to fall off a cliff. If there were a way to map out a ‘safe area’ this could be prevented but that’s not an option in any of the apps for any of the robot vacuums that I have used. That is why I am asking for it. If you have an app that is working with the neato robot vacuums and it has this option please post a screen shot as it is something that I have not seen. Thank you.

Interesting. I was wondering if they are efficient and effect in actually vacuuming I.e. cleaning.

The first time you run one, it will fill up quickly. You will have to run it three to five times to get all that has been missed by manual vacuuming because the bin will be full and after that initial cleaning of your house it will maintain a cleaner house than a manual upright vacuum.

Within the Wyze app, the user should be able to disable the cliff sensors so they are not used at all. Many people live in one-story homes where this feature is completely unnecessary. Additionally, these cliff sensors are infamous for false detections, leading to poor cleaning and robots being “stuck” on an imaginary ledge.

For your vote to count, you must click the VOTE button at the top of the page.

No, I just meant to put a small piece of black tape over the sensor on your vacuum in your single floor use case, in order to have it ignore your carpet pattern.

Every botvac that I have ever owned or researched has suffered from an inability to distinguish between the edge of a stair and a black bar printed on a carpet. After all this time I really had hoped that the botvac industry would have solved the false-cliff sensor problem without having to resort to using black tape over the sensor. Until they do I’d like to offer a suggestion.

Don’t get me wrong this is not a complaint post. I love this vac. It functions far better than my last one.

Apparently, like most / all (?) botvacs my Wyze Vac does great until it hits the black lines in the printed, short pile, carpet that covers my entire kitchen and entry way. At that point it goes berserk… even bucking up and down in a failed attempt to back up or rotate in place… completely unable to figure out how to escape the rug and it’s many imaginary cliffs!

My house has no stairs so the cliff sensors are not critical. Rather than request that a hardware “sensor off” switch be added why not just expand the existing “Virtual Wall” function to solve this problem?

Just drag a large box “wall” around the problem carpet followed by a pop-up requesting the choice of the box being assigned the task of functioning either as a regular “no go wall” or as a “ignore cliff senser” region?

Yes, I could certainly use the “virtual wall” to keep the vac out of the kitchen completely (which I have tried) but that defeats the purpose of a vac… kitchens can get messy.

This should be an easy “logic” switch in firmware… since I rather doubt that the existing system includes an option for the addition of a cliff sensor “hardware” switch.

Update: 01/22/21 OK… I spent more time than I care to admit carefully trimming Scotch green plaid frosted tape and then even more time carefully tucking those many tape layers down into the 4 clear plastic Cliff Sensors of my BotVac. Every new layer was then tested on my fake Persian rug (see photo below). The bot failed to escape the center “star” every single time… even up to 5 layers thick ! Finally, in frustration with my total lack of progress, I simply slapped on a layer AT AN ANGLE tha…

Black tape? That’s what cliffs ‘look’ like to the sensors. The tape needs to reflect the light to ‘look’ like the floor. I’ve used masking tape and aluminum tape. They eventually lose their hold and need to be replaced.

I bet a clear straw or piece of plastic (piece of a pen barrel, etc) glued across the emitter and receiver might work.

Wyze folks, this REALLY needs to be fixed. I have several large rugs that basically break the robot vacuum. It’s not even that the bot won’t vacuum the rugs, it’s that it causes the bot to go berserk, stuttering and looping and jerking around like a drunk. It’s absurd that a rug with a black line on it will make your vacuum go insane, but that is the situation. PLEASE add a software flag to disable the cliff sensors, because for now this vacuum is basically useless.

White electrical tape works as a total hack. Hopefully the Wyze folks address this because it would be funny if it weren’t such a ridiculous problem.

I used tape to attach aluminum foil strips to hang over the sensors allowing light get to them. Solved the problem. Used the “Virtual Wall” feature to block off the step downs into my walk in showers and sliding door onto my patio. (The cliff sensors didn’t detect the less than 2 inch drop downs). Obviously, us jury-rigging solutions is unacceptable! (Really, a vacuum - no matter how reasonable - should be able to work over black surfaces.) I’m sure the Wyze Guys can and should do better. How difficult could it be to create a feature to turn off the sensors in designated areas like the “Virtual Wall” does for “no go zones”. Alternately, but less flexible, they could allow you to just turn off the Cliff Sensors and use the “Virtual Wall” feature to block off areas that have drop offs. (Better yet, Wyze should find better sensors that can distinguish black from cliffs and recognize a 2 inch drop-off.)

I am having the same issue with a large multi-color area rug. It struggles to get out of a black outlined rectangle (which the rug has a few of them). A bit fun to watch it figure a way out at first but it has gotten old now. Hoping for a fix soon.

I have 2 large rugs, 1 with a Black boarder and 1 with a dark burgundy boarder. Not having any issues with it cleaning them.

The image attached is the rug I have. It is 8’ x 10’. The vacuum has the most trouble with the brown rectangle noted with the red box. It gets stuck inside this box every time and usually can only enter and exit from the thinner line on the right side. It also tends to bump some of the other darker lines all over the rug as well. I am happy to beta test any firmware updates. I really like the idea of being able to drop a box over this area of the floor map to disable the cliff sensors… or just better detection of the floor surface no matter what the color would be the ultimate fix. 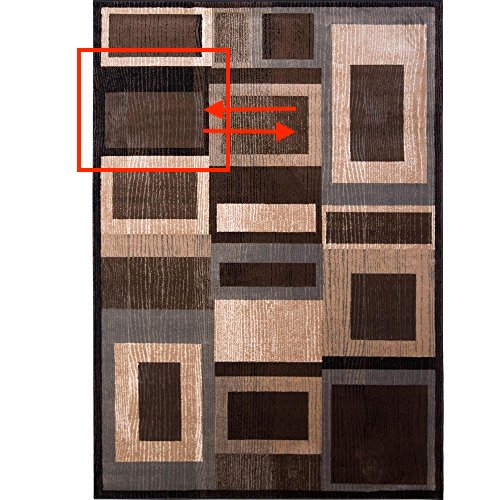 This one is my rug. My vacuum either stays around the border and traps itself under the couch (which is the cleanest that spot has been since I redid the living room, ngl), or traps itself in one of the little white wedges that makes it look like a terrified NPC in a zombie game. Having a bypass or a “green zone” that works like a reverse virtual wall would be extremely helpful, as this is the room that needs the vacuum the most.