Problem is Cam 1:
Two V3’s. ( Fw: 4.36.9.139) One location, inside an outside porch light. (Safe from water/rain)
I use wifi switches to off/on (restart) the cameras before daylight each day.
Cam 1 has worked without incident for 6+ months. Then drops offline. Power recycle - no joy.
So since I am up on ladder anyway, replace Cam 1 with Cam 2.

Cam 1 does not come back online with power cycle.
While fooling with it, two days past, and now Cam 2 is offline, same issue.
Both reported error 090. (Say again, both were located in same location, inside porch light 30 feet from mesh router node)
Ladder, removed Cam 2. Power cycle did not bring back online.
Both V3’s Cam 1 and Cam 2 are offline. error 90
Deleted Cam 2 from app, and rejoined it to network. Fine.
Deleted Cam 1 from app, and readied it to join network. But when power back up, RED light should show for few+ seconds then turn BLUE. But will not. Powered again dozen attempts, trying to get BLUE light, but it will not. Stays RED, no blink. Pressing Reset button, does nothing. App will allows attempt to connect, but Cam 1 does not change modes to Join.
Even tried multiple adapters, tried computer USB, tried power block.
Cam 1 will not enter Setup mode. Cam 2 is working fine.

Have low expectation its going to “fix” itself. Already ordered replacement on Amazon. V3 on sale ($32.98).

In the title it says you deleted the device

When the camera went offline , you then deleted the device from the app and attempted to set it up again?

From what I’ve read , it’s never a good idea to delete a device that’s offline and trying to set it up again . As this may brick it . Not 100% sure on this but it has happened to me and what I’ve read.

No. Removed it, right away. Made no difference. But thanks for that suggestion.

Yes, deleted it. But didn’t delete it immediately, was (praying) for a miracle restart would fix it as it does most of the time.

However, didn’t delete it, until after I had deleted Cam 2 and rejoined Cam 2 back to network. Since Cam 1 and 2 were behaving the same, I figured since Cam 2 is fine after deleting and rejoining, Cam 1 would do the same. But Cam 1 simply will not enter Setup mode.

As you, when device is not on network AND is not in app, when you go to join it, power it up, red light comes on immediately. Within a few seconds, blue light should come on. This one does not. Red light comes on and it does not change to blue. (Once Blue comes on we press Setup button on camera, and back to the app. Trying Setup button does nothing since camera’s blue light is not lit.

I agree with you. Should just add it back since its already been on the network/in the app. But would not begin Setup mode (blue light) when I removed power and restored power. Ordinarily, if offline and does not cycle back online with power cycle, Red light comes back on. So, in this case, had to try deleting it from app, to get it to enter Setup. But does not enter Setup. Red light simply stays on, - no blink either) when power back up. Removed and added power back dozen times, no matter.

I’m all out of ideas then besides trying a flashback firmware restart.

Just for the heck of it, try accessing from a different phone/tablet.

That’s a good idea. Thanks. But I am going to wait until I am that desperate. I’ve not done any firmware updates on the V3’s in weeks. So, it wasn’t a recent update that started this particular problem.

That’s another good idea. Have a Pixel 3a I keep for stuff like that. but doesn’t matter. Cam 1 is not on any network. Can’t get it to go into Setup mode to begin joining it back.

Understood. Just thinking that perhaps by some fluke the firmware on it corrupted and that’s why it won’t give you a clean boot. As a last resort, might try same version that was on it to see if it will take it.

That only applies to the WCO

Is your WiFi name or password 21 characters or more? I think there’s a bug with that recently. But if you didn’t update FW it may not be.

noooooo, Don’t forget, this has been working for months. And no recent FW update. Just out of the blue, it dropped offline. I know how, its easy to add them back to the net. But won’t enter Setup mode.

@SlabSlayer Mr. SlabSlayer, thank you for your suggestion ref flash back to previous FW.
That fixed the problem. I appreciate ya/ye. That was a good idea that I had not thought of. 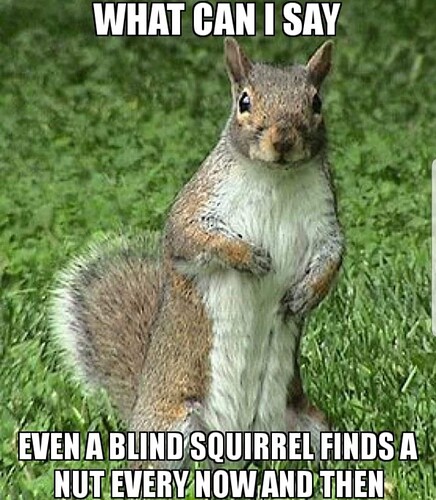 Glad you found a solution and got your cam back! So odd that it would just up and puke the FW that was on it. I’m thinking military