I have a warehouse I want to add cameras to record activity 24/7.

I already know how to setup the cameras (I have a fully functioning default multi-cam system at my house). I already added my warehouse cameras to my app on my home wifi. But it occurred to me I may not be able to connect to them later.

I want to leave them at the warehouse recording 24/7.

I don’t want to have to pull out the SD cards to review footage. But, I can bring an internet hotspot (preferably the one on my phone) with me so they can connect to the mothership and I want to access the review footage on my phone.

So my question is about initial wifi setup.

If I setup my cameras while on HomeWiFi, will I be able to pair them later to my CellWiFi or other hotspot WiFi?

It should work in theory, but some things get finicky when the ssid later doesn’t match the mac address they were set up. It’s not consistent though. So setting them up on router 1, then disconnecting it and turning on a new router with the same SSID sometimes causes devices to spaz out and not want to connect to the new router even though the SSID/pw is the same. I don’t know why, I just know that I have had this issue with some devices…but not all of them.

My suggestion is to set up the devices using the phone’s hotspot as their primary WiFi. Then go set them up in the warehouse and activate the hotspot so that they will connect to Wyze servers and start recording. After they start up and you verify they are recording, you can cut the hotspot and go home. They will continue to record, but will not give you any notifications. When you return to the warehouse, you can activate the hotspot and within a few minutes the cameras should connect to it and allow you to access them and their playback on the SD cards remotely.

Again, there will be no cloud recordings and notifications. Also, remember that the SD card loops. A V2 cam uses an average of just over 9GB for a full 24 hours of recording in HD settings. So if you use a 32GB card, you’re looking at 3.5 days of recording on average (give or take a little depending on a few factors). My 128GB cards hold almost exactly 14 days of recordings. So, if you use a 32GB card and try to check something from a week or 2 ago, it will be long gone, unless you have it set to only record when it senses motion.

Make sure to run some tests first (set it up, drop the hotspot, walk away for a few minutes, come back, turn the hotspot back on, try to reconnect to the cam and verify it’s working as intended. These devices aren’t always 100% consistent with each other. Sometimes one will work the way all the others do and the other doesn’t like it even when all the settings are the exact same. So verify first.

Thanks for the suggestions. I was starting to think that’s what I would need to do.
It’s going to be kind of a pain. I think I’ll need to just try and make it all work with my phone hot spot. Because if I use anything else, passwords don’t match either.

I’ll just have to document the name/password of whatever wifi I pair it to.

I can’t imagine why you’d want to use Wyze cams for this application. The moment they lose power or glitch out and try to resume they will find no Internet and stop working. You need something designed to be less reliant on the Internet. (That or leave a hotspot there, or acquire a regular Internet circuit.)

Wyze cams can work totally without internet actually. You can load RTSP firmware in them and run an NVR. But I don’t really want to do that. I just want them to record to their own SD cards and be able to review the footage if I need to. I’m not sure what you mean by “they will stop working”. They won’t just record to the SD card? Pretty sure they will.

Doing the setup with an iPhone as the hotspot connection is a little iffy. I had to first connect something to it so it stayed active, then I used another device to add the cameras to the Wyze account.

Yep, just fully tested it.
They sit there and record to their SD cards.
When I turn on my hotspot on my iPhone, they connect and I review the footage that was recorded while they had no network connection.
Seems to work as expected. Just a little wanky to setup on the phone.

But did you simulate a minor power outage to see if they continue to record after a reboot with no Internet available? Because that is what I am talking about.

If they do continue to boot successfully and resume recording, great.

Of course. Yes, they continue to record as expected.

You might want to do some additional research. I seem to remember posts mentioning that the cameras will work for some period of time but eventually need to contact and register with Wyze servers or they stop working. I don’t remember how long it takes, unfortunately.

Can you use cams without internet? Cameras

I know that this question may not make any sense at first but I have a friend that live in very rural America and do not have internet. He would love to use the devices to monitor his home and property. My question is, can the Wyze Cam be used and controlled locally without an internet connection. Thank you in advance for your helpful responses.

I will certainly test it and report back.

For your needs, you might want to check out the Dafang Hacks (GitHub - EliasKotlyar/Xiaomi-Dafang-Hacks). This replaces the Wyze firmware and provides a web interface, ftp process, etc. without requiring any internet. You do lose the Wyze functions, however.

He or she is primarily interested in recording to SD card. Does the Dafang Hacks supports that?

Wow, looks as if the answer is mostly “no”.

How do i get dafang to record video to sd card

I got the custom firmware to install and work, but I dont know how to make it wo…rk as a simple camera that records everything to its sd card. Maybe im missing something simple.

According to the setup pages, you can use local SD, Samba or FTP… 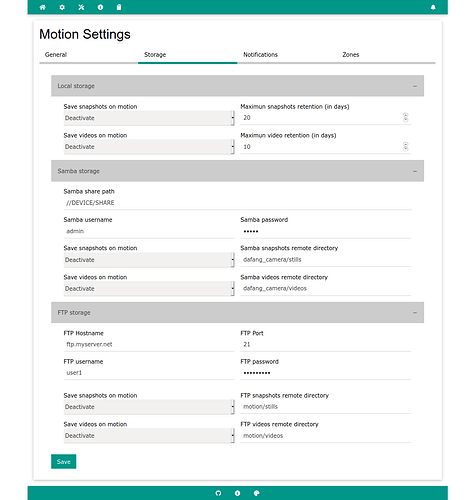 Excellent, thanks. Does it do continuous recording too? Your screenshot is for motion detected recordings…

I don’t see any setting for continuous recording, only motion. I have another program that would let me do continuous, in theory, called MotionEye (also MotionEyeOS). I just tested Dafang and was able to record a couple of snapshots to the local SD card, so I can say that much at least works.

Could you not set up the cams through a dedicated router network then set up that router in the warehouse with no internet connection? This will allow access to the cameras through your phone. Think of a travel router setup to access devices wirelessly.

Don’t really need another router. It seems to be working as expected. I’ve been testing it and they record constantly as I wanted and when I show up, I just turn on my phone hotspot and they connect now.
Works for what I wanted to achieve for now.
Tested for about a week without internet and they are still recording.

That’s awesome! Thanks for checking back with an update. I’m glad to hear it works as we discussed and that I didn’t lead you astray!